One of DDT Pro‘s biggest shows of the years comes around again. Last year, it was a two-night showcase of the TV show format that was required due to the restrictions at the time. While there is still an air of unease going around the world, wrestling has relatively returned to normal. Wrestle Peter Pan 2021 features a shorter card than previous cards under this namesake. All the same, each match seems to have something unique on display. 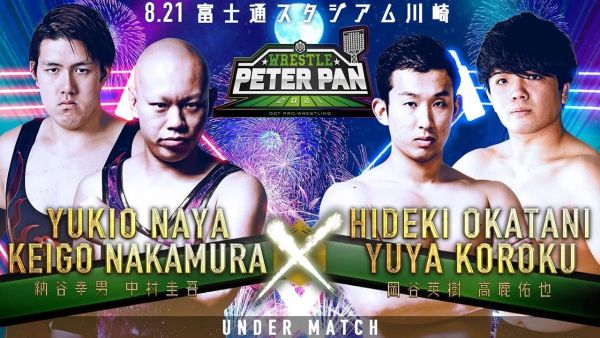 A match of the younger stars of DDT starts off the show. Hideki Okatani and Yuka Nakamura have been progressing together, with Okatani joining Junretsu and Keigo Nakamura, becoming a staple of DDT shows due to his comedic antics. Yukio Naya has had some struggles recently but is a solid powerhouse with great potential. This leaves Yuka Koroku, who debuted in April and now has a chance to stand out from the growing crowd of rookies with this match. 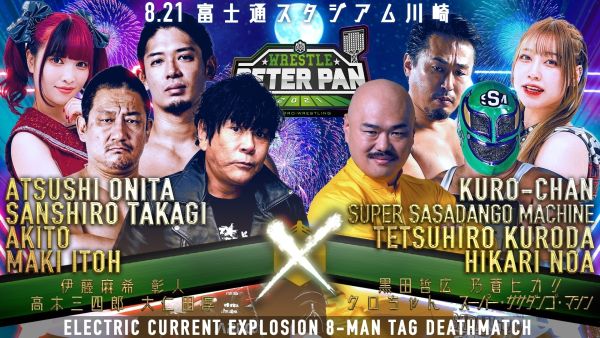 One of the first matches on the card to be announced was the pre-show bout.  The reason this match is happening is a shock win, seeing Kuro-chan beat Atsushi Onita in a Rojo Wrestling Match. Given that Wrestle Peter Pan 2021 is taking place in Kawasaki Stadium, a place where FMW Anniversary shows were held, a rematch of sorts was booked. This time, Onita has the homecourt advantage. Will it help him or will another upset be in the cards for him? 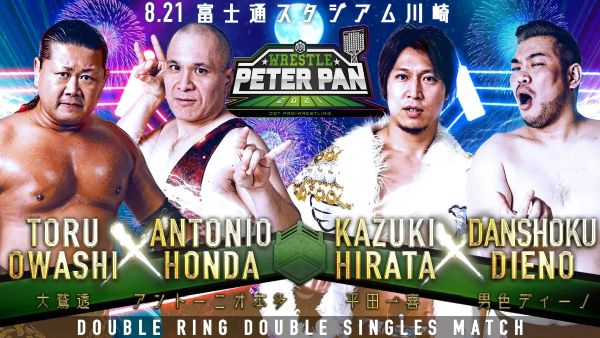 This may look confusing. Why are two singles matches being put together? These four men wanted a singles match, but given that there was no more room on the card, they were rejected. That was until one of them had the idea of having two rings set up and two separate matches going on at the same time. The winners from their respective matches will face each other. This will be chaos but it’ll be interesting to see. 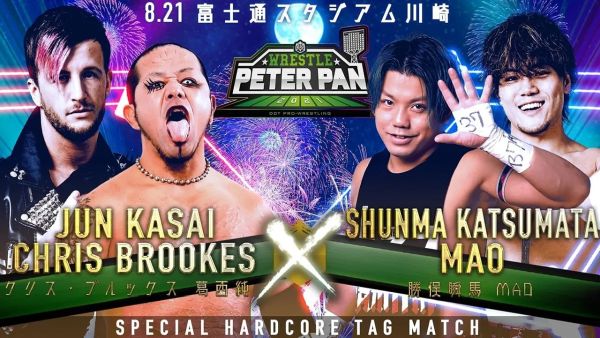 There has been a recent increase in the hardcore side of DDT. Jun Kasai made his opinion known, saying he wasn’t impressed. Enter The 37Kamina, who have gone above and beyond when it comes to their own hardcore stylings, even to the extent of Shunma Katsumata entering a deathmatch tournament. They feel they have something to prove here to Kasai. Thus, this match is made. However, the rumor Katsumata brought up of Kasai being weak to toy blocks is interesting. Will it come into play? 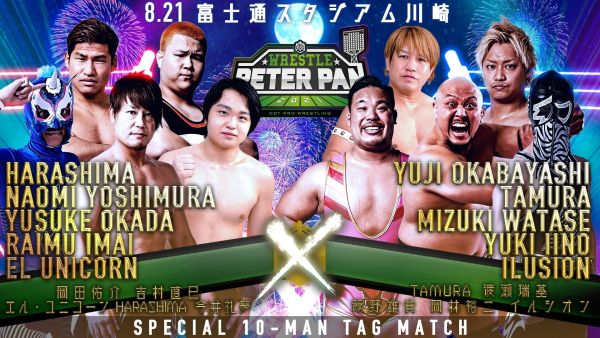 The purpose of this ten-man tag team match is to introduce two wrestlers to the DDT landscape: El Unicorn and Illusion. They are members of the DDT Teenage project, the gist being that individuals aged 13-18 are trained in the DDT dojo. There are others, but these two are being presented out as the shining stars. There is also a one-on-one match set for them later on down the line. This will be an interesting look at if a new project by the company as a whole will work as it is shoved out onto the big stage. 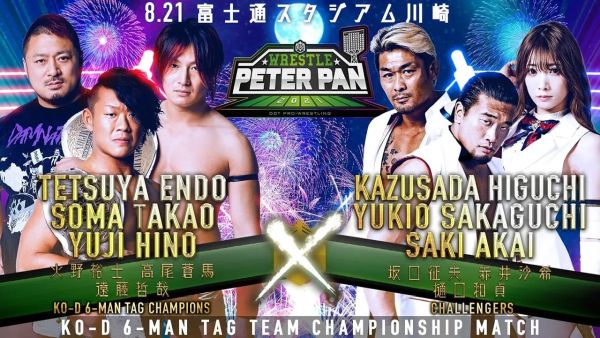 DAMNATION has been on a tear ever since Yuji Hino joined the stable back in December. The stable quickly picked up the KO-D 6-Man tag Team Championship in the process. Eruption had been faltering a bit. The team on top of the world not only lost both chances at singles glory but lost their own KO-D Tag Team titles, becoming quiet in the background. Along comes this challenge, which has echoes of their 2020 challenge where the DAMNATION stable targeted Saki Akai, figuring her to be a weak link of the chain. This may have been an error in judgment, as Akai seems to be the most fired up out of anyone to win, slapping her own team to get them fired up after hearing DAMNATION’s words. Will history repeat itself? 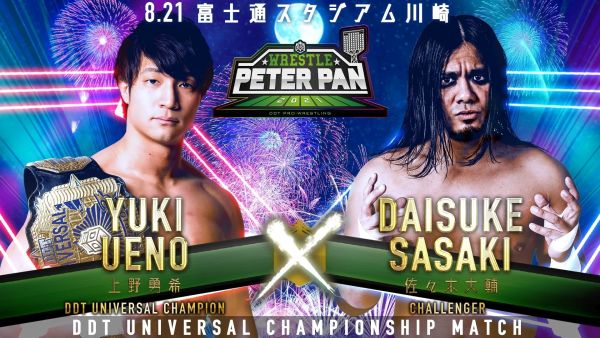 Only three people have held the DDT Universal Championship: Chris Brookes, Yuki Ueno, and Daisuke Sasaki. The title changed hands, in the past, due to underhanded tactics. Now, it looks to see that Sasaki is employing a similar strategy leading up to his shot against Ueno. Sasaki received this shot after beating Ueno with a low blow. Sasaki proceeded to steal the belt and was forced into quarantine after a COVID scare.  That didn’t stop Sasaki from tormenting Ueno via Zoom, taunting him every chance he got even beyond the clear date. This led to the contract signing where Ueno was blindsided by a returning Sasaki after the contract was signed. Will Ueno finally get what is his back or will Sasaki become the second 2x Universal Champion? 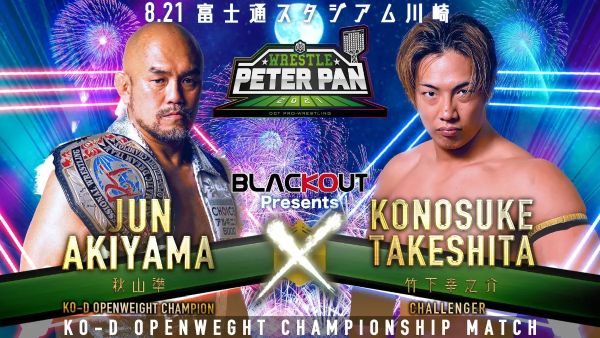 Konosuke Takeshita is the 2021 King of DDT Champion. Therefore, he earned the right to face Jun Akiyama for the KO-D Openweight title. The last time these two faced off in a one-on-one setting was the finals of the D-Ou Grand Prix, where Akiyama got the win. This leads him to his current championship status. Akiyama and Takeshita have been going back and forth, trying to one-up each other. In the end, it will all come down to this match. Akiyama’s win was avenging a loss in the D-Oh Grand Prix. Could the same fate befall him in the form of Takeshita at Wrestle Peter Pan 2021?