Former NXT North American champion Bronson Reed was one of a handful of World Wrestling Entertainment Superstars recently released. NXT’s fortunes seem to have dwindled, in the wake of WWE’s budget cuts, from its push in 2019-20 as a legitimate third brand of WWE’s television product to a territory in limbo. The sacrifice of its talent, as its status becomes ever more undefined, has seen releases from the black and gold brand earlier this year, but the release of Reed comes as a rather jolting surprise. It also sheds light on the issue concerning NXT babyfaces. 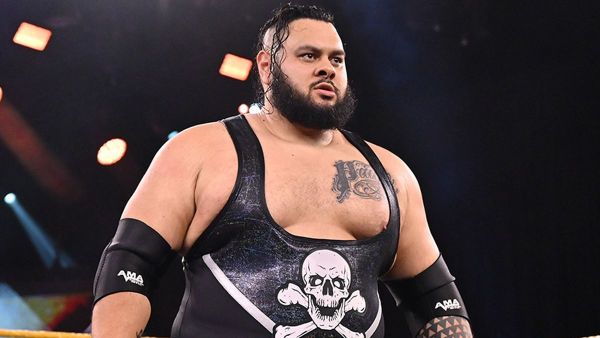 Reed only recently dropped the North American title to Isaiah “Swerve” Scott of the Hit Row stable, in June, after winning it in a steel cage match against Johnny Gargano in May. His win was celebrated as a hard-won and deserving achievement after fourteen years of hustle, and a boon for his home country, Australia, as Reed is the first Australian-born winner of the belt. After collecting the proverbial roses from his big win, Reed stayed on top of the card long enough to briefly team up with babyface tag team champions MSK against heel stable Legado Del Fantasma at NXT Takeover: In Your House in June.

Then, his push, title, and feud with Legado Del Fantasma were all transferred to Scott and Hit Row. Reed’s easygoing charisma, subtle humor, and chemistry with his allies, MSK, were all snuffed, as Scott’s stable rose. In many ways, the hip hop inspired stable seems to function as a D-Generation X for the TikTok generation: Swerve, like Shawn Michaels leading into DX’s first 1997 inception, is the (to borrow a phrase from novelist Francesca Lia Block) slinkster cool leader and visage of the group, the nexus of a motley crew of rebellious agitators who find themselves cast as antiheroes in their war against legacy luchador Santos Escabar and his clique, another heel faction.

There is little room for faces like Reed in the morally ambiguous, heel vs. heel stories that Paul “Triple” Levesque and company prefer to craft at NXT, stories driven by morally gray heroes and their ambitious pursuits. NXT, as Levesque’s theme song once intoned, is “all about the game, and how you play it.” Babyfaces require a different narrative to become viable long-term stars: ‘good vs evil’ may sound a bit trite and lofty, but truly such stories boil down to perseverance against cunning, the will of a pure heart against a conniving mind or brute force, an underdog versus a credible antagonistic force.

How Others Have Been Doing It

AEW pit its current cornerstone face, Cody Rhodes, whose persona has steadily become more and more grounded in a timely message of progressive, inclusive patriotism, against the anti-American arrogance of Anthony Ogogo and the diabolic malevolence of Malakai  Black, collectively raising viewers’ blood pressure as Rhodes teased his retirement after a loss to Black.

Where celebrity and character work meet, lies Rhodes’s appeal, and Tony Khan’s team milk all they can out of it;  his “American Dream” promo, in the run-up to facing Ogogo, especially touched an actual emotional chord with the audience, as the USA reckons with its history and future after several seismic social crises. Some things in life are bigger than ambition, and more compelling than schemes, betrayals, and personal fallings-out, and pro wrestling’s babyface heroes once stood shoulder to shoulder with comic book and film franchise heroes in representing the ideals that society grasps for, and individuals wish to articulate, emulate, and imbue.

By contrast, NXT babyfaces follow one of two patterns, neither of which lead to long-term growth as credible singles stars. Reed and Leon Ruff, who was also released on August 6, both had their ‘aw shucks!’ moment in the spotlight, smiling big after winning the North American championship, then quickly had their push swept out from under their feet as the title went to a more popular heel, in Ruff’s case Johnny  Gargano. Or, like Ember Moon and Zoey Stark, they’re placed on a tag team, not given a chance to develop as characters in their own right.

Of course, there is Kyle O’Reilly, who has been the default ‘good brother’ in his and Adam Cole’s Cain and Abel storyline, is still in the midst of a decent push that has showcased his technical grappling skills in stand out matches such as his bout against Kushida. However, it has been reported that Cole’s contract has lapsed and his future with WWE is to be determined after SummerSlam. If Cole leaves WWE altogether, he could take any interest in continuing to invest O’Reilly as a face hero with him, out the door. While WWE’s budget cuts have lately been NXT’s undoing, its own uneven bent towards heels and tweeners also chips away at its viability.

SummerSlam Card Takes Shape on SmackDown
Enough is Enough: Most Recent WWE Releases Have To Be The Final Straw