The season 8 finale of ChocoPro is important for two reasons. First, it marks the end of the latest chapter in a book that Gatoh Move Pro Wrestling has yet to conclude writing. Second, this will be the final show of Emi Sakura, at least for a time, before she makes her excursion to America. The Freddie Mercury enthusiast, as well as Founder of Gatoh Move, will be on American soil for All Elite Wrestling for the first time since December of 2019. Needless to say, the Gatoh Move crew will be looking to end this season with a bang. The ChocoPro #144 card is appropriately stacked as well, so let’s get into the action. 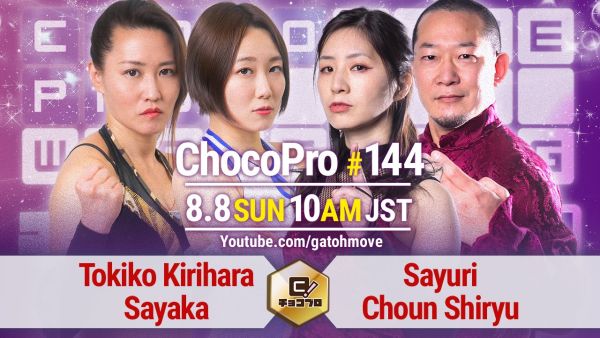 This ChocoPro #144 match will be incredibly important for Dragon Ninja. For those that don’t remember, Sayuri and Chon Shiryu were involved in the One of a Kind Tag League. Despite their best efforts, they ended the league with 0 points in Block A. Thus, they were the only team in the entire competition to not make the board. Furthermore, Sayuri has been winless since May, her last victory occurring on ChocoPro #118 in a tag team contest alongside Mei Suruga. Can Dragon Ninja return to their winning ways as they take on the Gatoh Move fourth-generation duo of Tokiko Kirihara and Sayaka? While Kirihara, AKA “Otoki-san,” is known for her strike-based approach, Sayaka has proven that she is just as hard-hitting as she is soft-spoken. Keep an eye on this opening encounter. 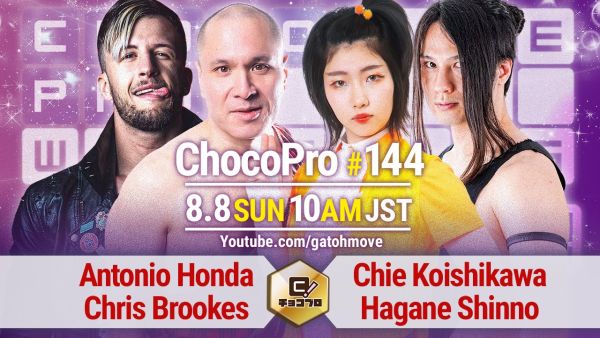 Another team that was part of the One of a Kind Tag League was the fan-favorite Egg Tart. The energetic Chie Koishikawa and understated Hagane Shinnou ended Block B with 4 points, though they failed to make it to the finals. Since then, Koishikawa continued to test her mettle against all comers, including the Calamari Drunken Kings themselves, Masahiro Takanashi and Chris Brookes. On this note, Egg Tart will be in for a challenge as they battle not only Brookes but his fellow DDT Pro regular Antonio Honda. Brookes and Honda have been in regular tag team action in DDT, evening competing in the Ultimate Tag League earlier this year, though they ended said league with 2 points. Within the confines of Ichigaya Chocolate Square, however, they are nothing short of formidable. Can Egg Tart end ChocoPro season 8 with a victory or will Brookes and Honda play the spoilers? 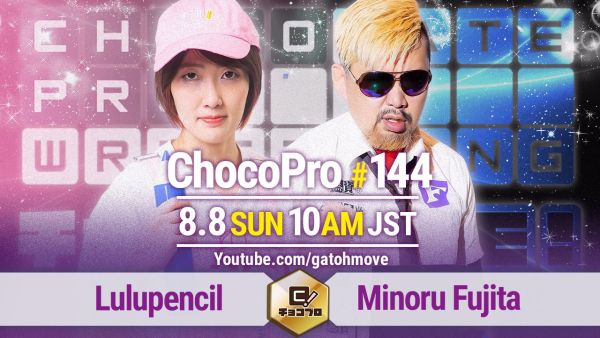 This match can best be described as an encounter between Pencil Army members. On ChocoPro #144, the group’s leader, Lulu Pencil, will do battle with its deathmatch-wrestling, taser-wielding Super Asia titleholder, Minoru Fujita. It’s important to note that this isn’t the first time they’ve faced off. Think back to episode #72, which took place this past December. In the main event, Lulu Pencil faced Fujita in what was essentially a hardcore match with ChocoPro flair. Despite the crafty approach of the “unbreakable” Lulu Pencil, it was the future Super Asia Champion that emerged victorious. Over the course of several months, Pencil Army’s unyielding commanding officer became stronger, even taking Chris Brookes to the limit in a 30-minute Iron Man Match on episode #137. Perhaps ChocoPro #144 will be a Cinderella-esque storybook ending for Gatoh Move’s lovable underdog.

Emi Sakura will wrestle her final match, prior to her excursion to the United States, on ChocoPro #144. It’s an appropriate match, at that, as she will be teaming with her longtime friend and tag team partner, Masahiro Takanashi. Longtime ChocoPro fans will undoubtedly be familiar with their partnership; even when Takanashi was on the shelf or prepping for his return, he assisted Sakura in filming events and assisting in any way he could. Their friendship even predates the formation of Gatoh Move, which speaks to just how well they know one another. In Sakura’s last ChocoPro match, at least for now, she will work alongside Takanashi to face Best Bros.

Mei Suruga and Baliyan Akki will be coming off a major main event from the episode prior. On episode #143, they took on Minoru Fujita and Chon Shiryu. Never a team to rest on their laurels, Best Bros are back in the main event picture, this time taking on two of the biggest names responsible for Gatoh Move’s growth in its early stages. It’s amazing to see just how far the company has come since its formation in 2012. Sakura’s vision has taken different directions, and through everything from wrestlers coming and going to the ongoing COVID-19 complications, it has been nothing short of a journey to behold. Here’s hoping that Sakura can contribute to AEW, in a positive way, and that she’ll be back on ChocoPro soon.