It will be a very special night come Thursday as Beyond Wrestling presents a one of its kind type of show — Dong Work For YUTA. The reigning IWTV Independent Wrestling Champion Wheeler YUTA will have to go to work against the one and only “Platinum” Max Caster while a number of massive matchups fill out the rest of the show. Whether you are in the building that night or watching live on IWTV, this will be a show that no one wants to miss. Here’s the preview for Dong Work For YUTA.

— Both Richard Holliday and Trish Adora are scheduled to compete, nothing has been made official

Chris Dickinson has made Beyond his home now for years and has utilized that to get him to where he currently is in his career. As one-half of the current ROH World Tag Team Champions alongside Homicide representing VLNCE UNLTD, Dickinson continues to make his name bigger and bigger without forgetting where he came from. Dickinson will face off with Rhett Titus, a man that he defeated at ROH Best in the World to win the ROH World Tag Team Championship. This will be the first time ever that these two men face each other in singles action, making it the perfect semi-main event for this show. Will VLNCE UNLTD or The Foundation get the leg up on Thursday night? It will be one to check out. 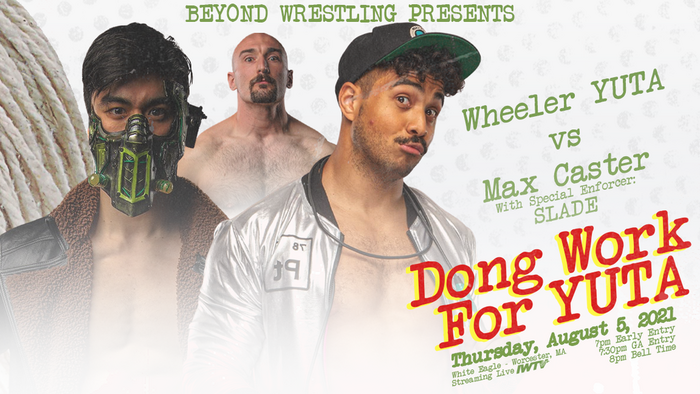 You may have looked at the title of this show and paused at what it could mean. Well, Wheeler YUTA is going to face the one and only “Platinum” Max Caster in a main event that is sure to leave people talking. Both of these men have been making names for themselves over the last couple of months in All Elite Wrestling (AEW), but this is their chance to remind everyone why Beyond is one of the best independent wrestling promotions in the entire world. YUTA, the current IWTV Independent Wrestling Champion, will have to prepare himself for the prematch beatdown that Caster has become so famous for. If he’s able to do that, this match should be favoring the champion. But if Caster is able to get into YUTA’s head before the bell even rings, it could spell trouble for the champion. This is a must-see encounter.