On ChocoPro #141, a high-stakes Super Asia Championship match took place when Minoru Fujita defended the blue title against Hagane Shinnou. Despite a valiant effort from the challenger, taking Fujita to the limit in a one-hour draw, the deathmatch veteran was able to walk away still the champion. ChocoPro #142 will feature two bouts, with one seeing the reunion of the first intergender Asia Dream Tag Team Champions. Here’s what to expect heading into this show. 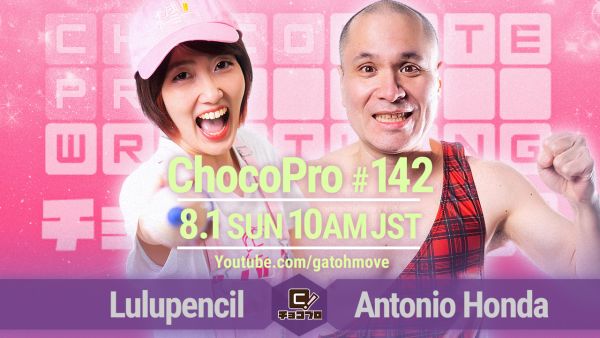 If there’s anything that Lulu Pencil has proven, over the past couple of weeks, it’s that she lives up to her “unbreakable” reputation. Her career-making performance against Chris Brookes on ChocoPro #137, though a losing effort on her part, showed just how far she has come as a wrestler. Following this accomplishment of sorts, Lulu Pencil continued to wrestle on shows, most recently taking on fellow fourth-generation star and quasi-rival Tokiko Kirihara on ChocoPro #140 in another losing effort. As she heads into this upcoming show, she must truly have her wits about her.

This episode marks the first appearance of Antonio Honda since ChocoPro #130. By this time, the One of a Kind Tag League was drawing near. In their final match of the tournament, Honda and Kirihara, collectively known as White Comaneci, took on eventual Block B finalists Melt Brain Dancing to a time limit draw. Since then, Honda has been a regular presence on DDT Pro, mostly in tag team contests. Honda’s wrestling style is often characterized by clever, oftentimes comedic, antics. However, Lulu Pencil has shown her resourcefulness in even the most precarious situations. Pencil Army‘s commanding officer and the veteran Honda have wrestled on three separate occasions on ChocoPro; expect this latest encounter to be just as cerebral with mind games aplenty. 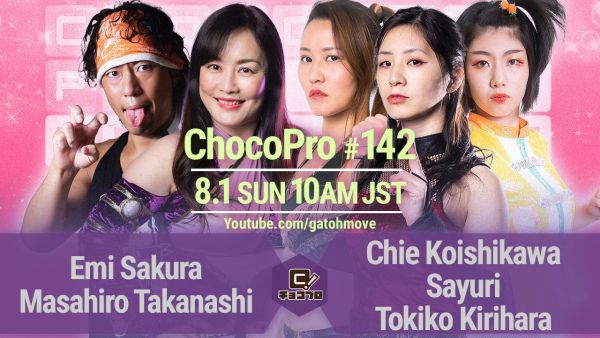 For the first time in ChocoPro, Emi Sakura and Masahiro Takanashi. The team of Hyakkin Thunders should be familiar to long-time Gatoh Move Pro Wrestling fans, as they’ve been teaming since their days in Ice Ribbon. This partnership would carry over into the early developmental stages of Gatoh Move, as they not only teamed up but wrestled one another as well. In March of 2017, Hyakkin Thunders won the Asia Dream Tag Team Championship, becoming the first intergender team to accomplish this feat; this wouldn’t be matched until New Year’s Eve 2020 when Best Bros won the purple belts from RESET.

As stated earlier, ChocoPro #142 marks the reunion of Hyakkin Thunders and they will have a tall challenge ahead. They enter a 2-on-3 handicap match against Gatoh Move fourth-generation stars Chie Koishikawa, Sayuri, and Tokiko Kirihara. This is a unique blend of boundless energy, ninja-like illusion, and hard-hitting offense, respectively, that only promotions such as Gatoh Move can bring to the table. On paper, one may think it’s a given that the younger team takes the victory. However, given the combined experience of Sakura and Takahashi, said victory may be easier said to achieve than done.