ChocoPro season 8 is fast approaching its conclusion, and with 4 episodes to go, this couldn’t be any truer. Last time, on ChocoPro #140, multiple announcements were made regarding the show and Gatoh Move Pro Wrestling as a whole. Chief among these was Emi Sakura‘s return to America, specifically to compete for All Elite Wrestling on western soil. She will be making her way stateside following the ChocoPro season 8 finale. For this week’s show, however, fans are in for a one-match show that proves to be nothing short of promising. Let’s take a deeper dive into the action at hand. 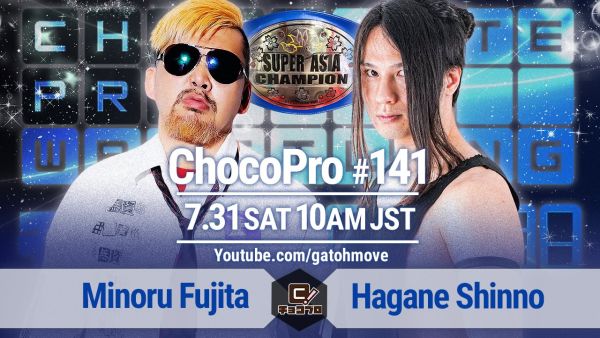 Earlier this month, the ChocoPro One of a Kind Tag League was well underway. On episode #133, in Block B, two teams did battle. These were Egg Tart, Chie Koishikawa and Hagane Shinnou, and Mi✰Sayaka, the duo of Super Asia Champion Minoru Fujita and Sayaka. In this match, it was Egg Tart that picked up the 2 points. What was most noteworthy, however, was that it was Fujita who was pinned at the hands of Shinnou. What this victory did was firmly etch the strong, silent half of Egg Tart in singles title contention.

This will be Minoru Fujita’s first singles match in ChocoPro in over one month. On episode #125, he successfully defended the Super Asia title against a game Mei Suruga. Beyond this, Fujita has been largely a tag team competitor, whether it’s been alongside Sayaka in the One of a Kind Tag League or his Pencil Army comrades. He’s also displayed a predilection for foreign objects ranging from pencils to tasers. Outside of ChocoPro, the deathmatch veteran has been active in such promotions as Colega Pro Wrestling and Pro Wrestling BASARA. Despite being in his mid-40s, his commitment to the punishing deathmatch style can’t be denied.

Hagane Shinnou is in a similar position as Fujita in that he’s been largely a tag team wrestler in ChocoPro. His team with the energetic Chie Koishikawa has seemingly unlocked a new sense of personality in him. When Egg Tart formed, he was relatively quiet, letting Koishikawa do the talking and be the spark of the duo. Though he’s still reserved, the formidable Shinnou has spoken more. His last singles ChocoPro match dates back to episode #102 with a dominant victory over Lulu Pencil.

On ChocoPro #141, Shinnou enters his first Super Asia title match as he challenges Fujita. Despite this, the challenger is no stranger to singles gold, as he is a former 2x Independent Junior Heavyweight Champion in Japan. Furthermore, within the confines of Ichigaya Chocolate Square, he has proven himself as one of ChocoPro’s most dominant wrestlers. Between Shinnou’s lethal striking and Fujita’s deathmatch expertise, this is a title match that can go either way.