Gatoh Move Pro Wrestling will be in a celebratory mood on ChocoPro #140. On July 29, Chie Koishikawa and Lulu Pencil celebrate their birthdays; what better way to start the festivities than with wrestling action inside Ichigaya Chocolate Square? Since ChocoPro #141 will not take place until July 31, the ChocoPro crew intends to party ahead of time. You won’t need to bring gifts or treats, though support for the show – further information can be found below – is always welcome. Without any further delay, let’s take a deeper dive into the action to come on this special episode. 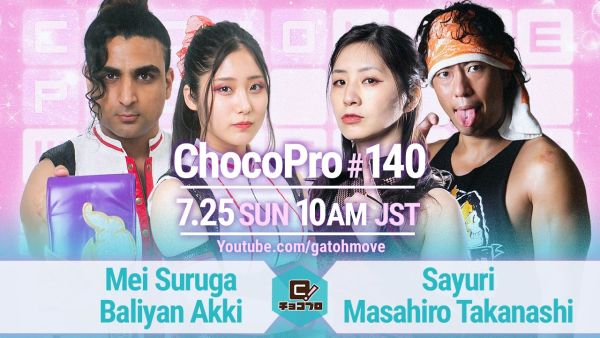 In action, on this special birthday edition of ChocoPro, will be the reigning Asia Dream Tag Team Champions. Best Bros, the duo of Mei Suruga and Baliyan Akki, will step into Ichigaya Chocolate Square with momentum on their side. The previous episode saw them defeat the team of Tokiko Kirihara and Lulu Pencil, despite solid efforts from the latter team. As they await new challengers for their purple belts, Suruga and Akki continue to wrestle their way through the various teams in Gatoh Move. On ChocoPro #140, they prepare to take on a new duo to the purple-and-yellow promotion.

Also entering ChocoPro #140 with momentum Masahiro Takanashi; on the last episode, he defeated a game Chie Koishikawa, who took him to his limits. Nonetheless, the man who “only lives twice” picked up another victory in Ichigaya. On this episode, he joins forces with a new partner in the form of Sayuri. Gatoh Move’s “Ninja” hasn’t been seen on ChocoPro since episode #135, where she teamed with Koishikawa and Sayaka in a losing effort against Best Bros. Expect Sayuri to stop at nothing, as well as potentially pull out a new trick or two, to make her return a win. 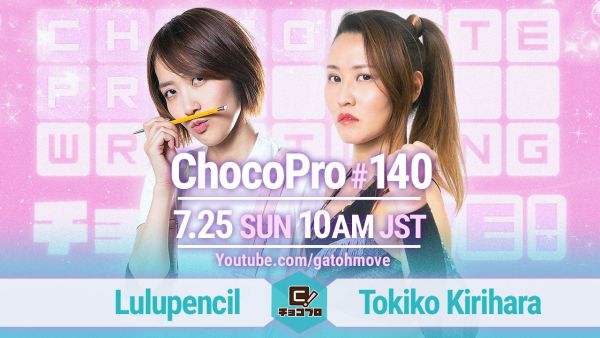 The second match announced for this show pits two familiar foes against one another. This will be the third time that Lulu Pencil and Tokiko Kirihara face off in singles competition. Their first singles bout took place nearly one year ago, on ChocoPro #41, also known as the Emi Sakura 25th Anniversary Show. Despite the Pencil Army commanding officer’s best efforts, it was “Otoki-san” that emerged victorious, picking up her first singles victory in the process. Less than two months later, on ChocoPro #54, they faced off once more. Second verse, same as the first; the earnest Lulu Pencil fell to her more physically imposing adversary.

Since then, both Gatoh Move fourth-generation stars took different paths. While Lulu Pencil recruited for Pencil Army, as well as recently battled former group member Chris Brookes in her career-defining Iron Man Match, Tokiko Kirihara formed a partnership with the tricky Antonio Honda as Black Comaneci, or White Comaneci depending on their demeanor. Needless to say, both wrestlers have grown over the months. In this third encounter, will Lulu Pencil pick up her first official singles victory, making for a stellar early birthday present, or will the “Comaneci” mistress continue their feud with a score of 3-0? 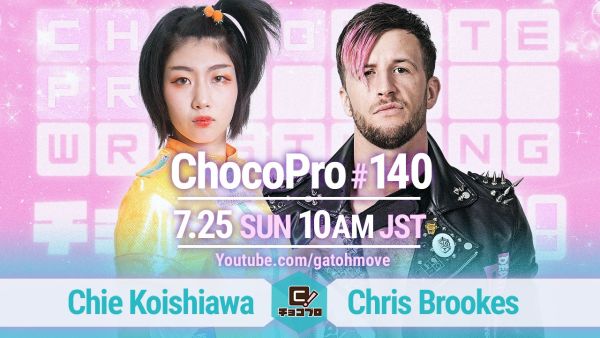 The main event for ChocoPro #140 features a first-time singles encounter. On his last ChocoPro appearance, as mentioned earlier, Chris Brookes took on Lulu Pencil in an Iron Man Match. For 30 minutes, the two heated rivals battled in what many fans consider one of the best matches in the show’s history. Brookes won the match with 3 falls to his name. What was shocking, however, was that Lulu Pencil kept his shoulders down for three count, meaning that said match ended at 3-1. This earned the respect of Brookes, who finally acknowledged his opponent as not just a writer but a professional wrestler. On ChocoPro #140, “The Calamari Catch King” returns to face a different opponent.

On the previous episode of ChocoPro, Chie Koishikawa faced Masahiro Takanashi, who has been on a seemingly endless wave of momentum since making his official return to action. In said encounter, Koishikawa fell to Takanashi, who is a longtime ally of Brookes. Together, they became known as Calamari Drunken Kings, or CDK. Together, they wrestled tag team matches for not only Gatoh Move but DDT Pro as well. Suffice to say, the girl with “Too Much Energy” will wrestle back-to-back shows facing both members of CDK. Will Brookes enter this match with shaky confidence, knowing that he was the first wrestler to ever have his shoulders pinned to the mat by Lulu Pencil? Perhaps this will give the exuberant birthday girl the opportunity she needs to pick up a huge singles victory.