April’s NXT Takeover: Stand and Deliver took its moniker from a saying that pistol packing highway robbers in 17th and 18th century  Britain used to menace their victims during stick-ups. Its tattered jolly roger logo backed up this menace, and to the theme of “The Triumph of King Freak” by Rob Zombie, pitched itself as the darker, hardcore opening salvo of WrestleMania week. For June’s upcoming event NXT Takeover: In Your House, however, the black-and-gold brand is digging deep into WWE history while delivering fresh, high stakes twists.

In Your House was the title of a series of low-cost pay-per-views held by WWE, then WWF, throughout the 90s, as they went head to head with their competitor WCW for TV ratings and pay per view subscribers. The branding was discontinued in 1999, and this is the second event NXT has held with the resurrected In Your House tag. This year’s NXT TakeOver: In Your House features another throwback element, the Million Dollar Championship.

"Once again, I'm Adam Cole Bay-Bay… and he's not!"@AdamColePro does not hold back words against the #WWENXT Champion @WWEKarrionKross on @WWETheBump.#NXTTakeOver pic.twitter.com/U4BYW0UDr2 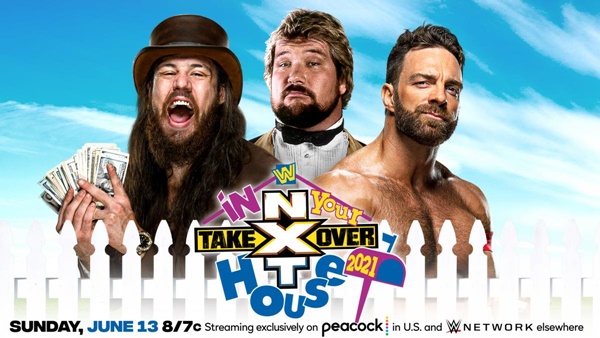 The WWF Championship alluded him at Wrestlemania IV, so the “Million Dollar Man” Ted DiBiase commissioned his own personal championship, the Million Dollar Championship. It was used as a prop in storylines throughout the ’80s and ’90s, and has been revived as Cameron Grimes and L.A. Knight face off for the Championship and to be DiBiase’s protégé. Whoever does become DiBiase’s top boy will be in good company: Steve Austin was a DiBiase acolyte under his Ringmaster gimmick. The segments of DiBiase foiling Grimes’ attempts to floss have been hilarious, as was their in ring confrontation on May 25’s NXT. As for L.A. Knight, the feud with Grimes has highlighted his exceptional mic skills and their respective comic timing are a perfect match for each other. Expect Knight to walk away iced out with DiBiase’s belt, if only because he is the new kid on the block and is still being put over, and a frustrated Cameron Grimes is comedic gold not to be wasted. 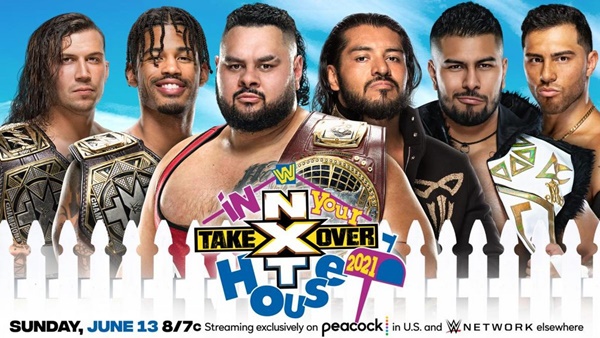 Another act enjoying their honeymoon period is MSK. The babyface tag team champions have kinetic, rowdy, peak Matt and Jeff Hardy energy and moves, and a compelling personal backstory: Wes Li and Nash Carter are pitched as real life childhood best friends, and Carter’s dream to be a wrestler grew out of his bond with his late father, a lifelong WWE fan. They are easy to root for, as is North American champion Bronson Reed. The three have come to each other’s aid against heel faction Legado Del Fantasma, and on June 8’s NXT, the rivalry went up a notch – with the challenge to put not only MSK’s tag team belts but Reed’s North American title on the line against Santos Escobar, Raul Mendoza,  and Joaquin Wilde. Two major championships on the line in one match is a salivating promise of an impactful spectacle. As to which side will pull off the win, that depends on how each side is going to be cast going forward. Escobar claimed the unified Cruiserweight belt against NXT UK titleholder Jordan Devlin at Stand And Deliver, but promptly lost it to Kushida. Escobar is an effective heel, suave but never overtly tongue-in-cheek, with an MJF-esque air of gentile malevolence. He’d be just that much more effective of a bully with some gold around his waist, or his crew’s, with Reed and MSK cast as the lovable babyface underdogs scrapping to get the titles back in their hands. 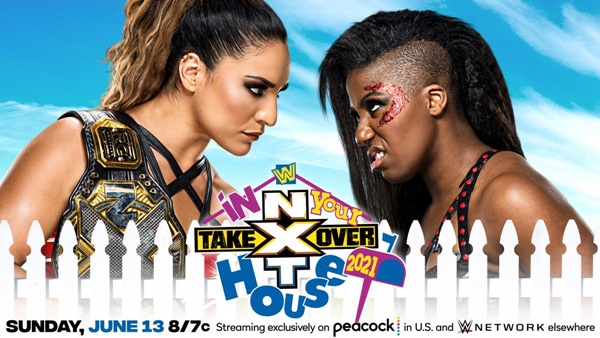 NXT revels in the claim that it has the “best women’s wrestling division in the world.” It does have an immensely talented roster of female performers, and mostly utilizes their talent in exciting and meaningful ways. On the NXT TakeOver: In Your House card for the division is a showdown between Ember Moon and Raquel Gonzalez for the NXT Women’s championship. Viewers of June 8’s installment got a preview of that match, when Gonzalez interfered in Moon’s bout against Dakota Kai. Ember is a savvy veteran with a dynamite move-set and is really popping since being paired with maverick, Shotzi Blackheart, as a tag team. The Capital Wrestling Center crowds are usually behind her, chanting for Moon against any given opponent. Gonzalez, however, has, much like Toni Storm, been liberated from the shadow of Rhea Ripley since her (lamentable) Raw call-up. Gonzalez is filling the role of strongwoman vacated by Ripley, and her aggression has put her on the top of the division. The day could be taken by either woman. 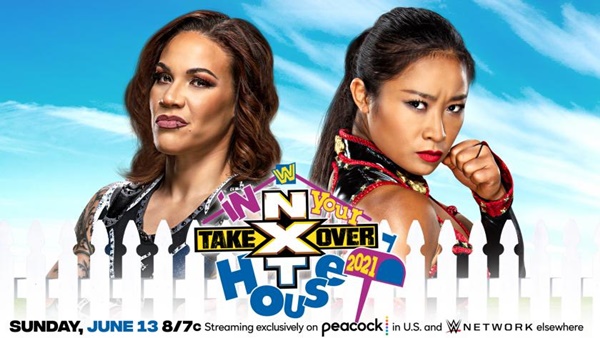 Elsewhere in the women’s division, the feud between Xia Li, Tian Sha and Mercedes Martinez is a lesson in how to do supernatural storylines with the women’s roster, that the masterminds of the Alexa Bliss blight on Raw may want to take notes on. Martinez is a veteran of several promotions, and a ruthless, hard hitting fighter. She challenged and lost to Gonzalez in a bid for the women’s championship, but the fight was pitched as one between equals that could not only go either way, but pushed the usually unassailable Gonzalez to her very limits. Soon after, smoke shrouded and shadows fell in the CWC as Martinez stood in the ring, and when they cleared, she discovered the mark of Li’s presumably immortal master, Tian Sha. The reboot of Li into a supernaturally powered fighter has been hit or miss, but here is a chance for the storyline to gather momentum as the supernatural entities of Li and Tian Sha take on a fierce opponent that will give Li a chance to show off her new attitude. The magical elements were well-staged, and the storyline is grounded by the promise of an actual match between the two, which is taking place not long after the story was first teased, reminiscent more of Lucha Underground’s use of the preternatural than the long, winding, storyline of the demonic Alexa Bliss, which has had Bliss out of meaningful in-ring action for several months. 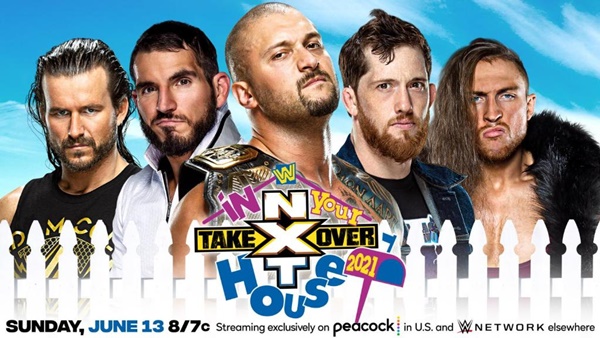 The main event, and sure to be the stand out match of NXT TakeOver: In Your House, is the fatal five-way for the NXT championship between champion Karrion Kross and challengers Kyle O’Reilly, Adam Cole, Johnny Gargano and Pete Dunne. Each man is at the height of his powers. Champion Kross has a somewhat unvarying but effective menu of suplexes to serve all comers. O’Reilly and Cole have a long history, coming to WWE from Ring of Honor together, and sharing significant time in the beloved stable, Undisputed Era. Their falling out was a gleeful and melodramatic theater of rage, which culminated in an epic chain match at Stand and Deliver. Since then, both their gimmicks have grown and diverged from their Undisputed Era personas: O’Reilly has an insouciant, Bart Simpson-esque mien of cheeky joie de vivre, while Cole’s taken the muzzle off his mic skills and isn’t shy to remind people who Adam Cole, Bay Bay, was, is, and what he could be. Gargano is NXT’s first Triple Crown champion, having won the NXT tag team, North American, and overall championships, respectively, in the past; like Cole, he is coming for a prize that was once his, and he is a consistent in-ring performer who is always a true threat.

As for Dunne, to paraphrase Rosie Perez speaking of Mike Tyson, he calls himself the baddest man in NXT because he is the baddest man in NXT. Dunne’s catch-as-catch-can inspired style of submission wrestling is not for the faint of heart, and could easily overwhelm any one of these worthy opponents.

Its any man’s game, but with start-and-stop whispers of Kross’s Raw call up having circulated for months, he could lose the title to bow out and appear on Monday nights. Then, Damian Priest has someone to feud (or sit in catering) with. Finn Balor could be on his way to Raw, as well, and the three NXT alums might be able to have a storyline together. If that is the case, then the true contest is down to O’Reilly, Dunne, Gargano, and Cole. Like Grimes, Gargano is at his most entertaining when he is beltless, frustrated after a big loss. The spectacle of Dunne as champion, facing a steady weekly series of challengers for his gold like Darby Allin’s recently ended run as TNT champion at AEW, would be, as my grandfather used to say, “Some good wrasslin’ on the TV”. His brutal skill-set tried against any opponent is always gripping for its realism.

However, expect the real action to come down between O’Reilly and Cole, furthering their “brother against brother” storyline, with Cole taking the championship for the second time to complete his me-gain heel turn.

With some nods to the past and exciting set-ups for future storylines, NXT Takeover: In Your House promises some thrilling, standout moments from a great lineup of matches that matter.