There’s more than one wrestling company with an affinity for the undead. Live from Atlantic City, New Jersey, Game Changer Wrestling will hold Zombie Walk. Despite what the name may imply, this event will be nothing short of alive, featuring many of the hottest names on the independent wrestling scene today. As the weather continues to heat up, so will the anticipation for this event. Here is what to know heading into GCW Zombie Walk, including the full card and a few highlights. 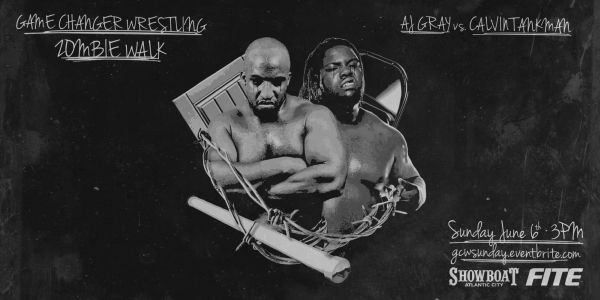 This is Going to Hurt

This upcoming contest between AJ Gray and Calvin Tankman can best be described as a battle of attrition. Simply put, these are two of the hardest-hitting stars on the independent scene; something will have to give. On one side of the equation stands “Rich Homie Juice,” AJ Gray. In 2021 alone, his GCW work against such opponents as Billy Dixon, Mo Atlas, and JTG showed just how explosive yet fast-paced he is. His most recent showing for the promotion took place at Draft Day, where he challenged Nick Gage for the GCW World Championship. Despite coming up short, Gray held his own against “The King of Ultraviolence.”

Gray will be entering GCW Zombie Walk to take on an equally hard-hitting opponent in Calvin Tankman. Most recently, in GCW, “The Heavyweight Hustle” fought in The Acid Cup 3. Tankman performed well, making it to the semifinals where he was ultimately defeated by Lee Moriarty. It’s worth noting that the last time Gray and Tankman two faced off was back in 2019. In July of that year, Tankman unsuccessfully challenged Gray for the Paradigm Pro Wrestling Championship. Can Tankman balance the proverbial ledger by picking up a win less than two years later? This will be a battle not to miss. 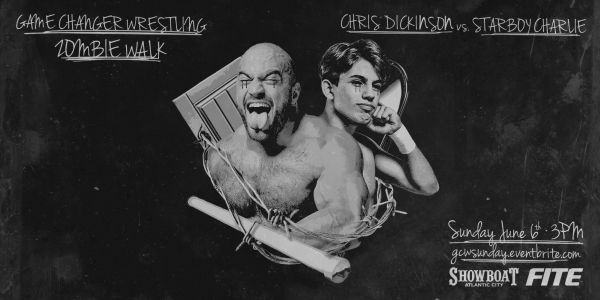 A Contrast of Styles

One of the many matches set for GCW Zombie Walk will pit an indie wrestling mainstay against a youngster on the rise. Chris Dickinson is among the various GCW staples that helped build the organization to what it is today. In fact, “Dirty Daddy” has a solid track record in GCW throughout 2021; of the seven matches he wrestled, he won five. Meanwhile, “Dirty Daddy” himself has been prominently featured on ROH TV and NJPW Strong. Longtime fans will be familiar with his unique brand of technical, hard-hitting offense. This makes his opponent heading into Zombie Walk all the more interesting.

18-year-old indie wrestler Starboy Charlie has been wrestling since the mid-2010s, but he has picked up ample steam the past few months. This seemed to begin at Jimmy Lloyd’s D-Generation F in April, where he bested the very wrestler the event is named after. From there, he continued to make appearances for not only GCW but F1RST Wrestling, even competing for the IWTV Independent Wrestling Championship. Compared to Dickinson, Charlie’s offense is more fast-paced and high-flying. In other words, when he’s allowed any momentum, he can become a threat. Can Starboy Charlie be the David to Chris Dickinson’s goliath and emerge victorious at Zombie Walk? 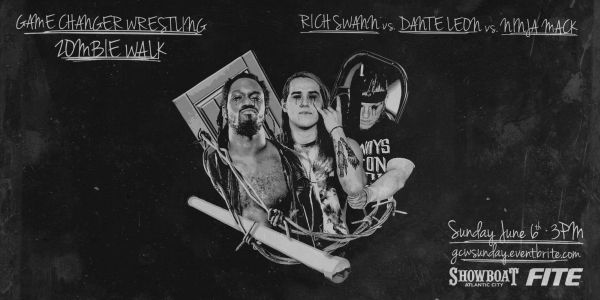 A Three-Way Match on the Fly at GCW Zombie Walk

There’s something to be said about the ability to think on the fly in professional wrestling. Originally, Dante Leon was scheduled to face Lio Rush at GCW Zombie Walk. However, days prior to the event, Rush was pulled. Endseeker” Dante Leon is not unlike Rush in that he is a high-flying independent star. He began his professional wrestling training in the mid 2010s, learning under Marek Brave and current WWE Superstar Seth Rollins. From there, Leon started to carve his name in promotions including SCW Pro Wrestling and Canadian Wrestling’s Elite. Leon made his GCW debut at Jimmy Lloyd’s D-Generation F, picking up a major victory over Myron Reed.

Also originally scheduled for Zombie Walk was Joey Janela; like Rush, “The Bad Boy” was pulled. Janela was set to battle Ninja Mack, who has turned a number of heads. During WrestleMania week, the independent wrestling world quickly became acquainted with the newcomer. They were enamored with his quickness and athleticism, not unlike that of a real-life ninja. At Jimmy Lloyd’s D-Generation F, he emerged victorious in the six-person Scramble Match. His most recent showing, which took place at JCW‘s Opening Day event, saw him pick up a singles victory over Dante Leon. Despite being a newbie, for all intents and purposes, it’s apparent that the sky is the limit for Ninja Mack.

One of the more recent additions to this event is former IMPACT Wrestling World Champion Rich Swann. “The Outlandish” wrestling star lost the title to Kenny Omega at last month’s Rebellion event in a title-for-title encounter. Despite the loss, Swann put forth a formidable showing against the reigning AEW World Champion. It’s important to note that Zombie Walk will mark Swann’s third GCW appearance for the year. His last match for the promotion took place at rSpring Break, where he bested Lee Moriarty. In fact, heading into this event, Swann is undefeated in GCW in 2021. Can he continue this hot streak? Tune in this Sunday to find out.

Stay tuned to the Last Word on Pro Wrestling for more on this and other stories from around the world of wrestling, as they develop. You can always count on LWOPW to be on top of the major news in the wrestling world, as well as to provide you with analysis, previews, videos, interviews, and editorials on the wrestling world. GCW Zombie Walk is set to air on Sunday at 3 PM EST on FITE. Tickets for the event are also available via Eventbrite.