After laying the challenge back on episode #121, the Asia Dream Tag Team Champions will have said challenge answered. Best Bros, the team of Mei Suruga and Baliyan Akki, have held the Asia Dream Tag Team Titles for over 150 days. During this span, they have overcome all obstacles in their path. Will this be the show where their momentum comes to an end? Gatoh Move Pro Wrestling is set to present ChocoPro #123, a one-match show that promises to be nothing short of exciting. Let’s take a closer look. 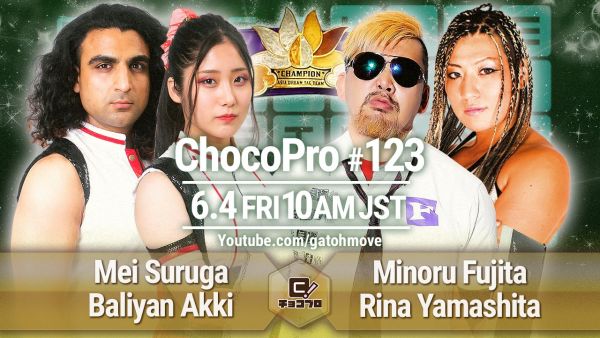 At the end of ChocoPro #121, Best Bros made the claim that there is no one left for them to defeat in Gatoh Move. From RESET to TropiCalamari to Egg Tarts, Mei Suruga and Baliyan Akki have been able to maintain their hold on the Asia Dream Tag Team Championship. However, with the input of Emi Sakura, it was learned that they haven’t conquered all possible teams. This was when their attention was drawn to the duo of Minoru Fujita and Rina Yamashita.

Also known as “Tag Team Destroyers,” Fujita and Yamashita have been prominent wrestlers in Pro Wrestling FREEDOMS. They even won the promotion’s King of FREEDOM Tag Team Championship this past February. Akki proposed the idea of a title-for-title match down the line. However, late last month, Fujita and Yamashita lost the King of FREEDOM Tag Team Titles to Toshiyuki Sakuda and Takayuki Ueki, meaning that this upcoming match for ChocoPro #123 will be solely for the Asia Dream Tag Team Titles.

Despite recently losing their titles, Minoru Fujita and Rina Yamashita shouldn’t be counted out as contenders. Yamashita has won tag team gold in various promotions, including REINA and SEAdLINNNG. Her hard-hitting style, as a brawler, makes her that much more of a challenge. Meanwhile, Fujita is a deathmatch veteran who planted his flag in Gatoh Move earlier this March. He is the promotion’s current Super Asia Champion following the title’s recent revival; one would assume that he’d be that much more driven to add more gold to his collection.

The importance of this match to Fujita and Yamashita can’t be denied. Following the aforementioned title loss, they will be looking to get back to their winning ways as champions, regardless of promotion. However, if either Suruga or Akki get the win, specifically over Fujita, it could pit either of them in singles title contention. In other words, either Akki would be clawing his way back to the Super Asia Title or “Mei-chan” would be pursuing singles gold as a more seasoned wrestler. Regardless of the outcome, expect both teams to leave everything on the mat come ChocoPro #123.