Gatoh Move Pro Wrestling returns to Ichigaya Chocolate Square, as well as YouTube, for another edition of ChocoPro. This episode looks to be a promising one, including a main event between two familiar foes. While they have competed against each other multiple times, they fought on a high level. This is just one of the many bouts to look forward to on ChocoPro #118. Let’s run down the card. 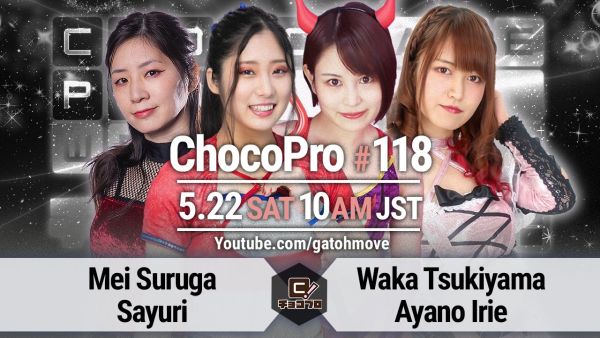 Opening ChocoPro #118 will be a tag team contest featuring two Actwres girl’Z talents. Mei Suruga was initially slated to team with Ayumi Hayashi. However, due to illness, the “Wasshoi” warrior had to be pulled. In Hayashi’s place will be the cunning “kunoichi” of Gatoh Move in Sayuri. Together, they will take on the AWG team of Waka Tsukiyama, the delightful demon herself, and the debuting Ayano Irie. Beginning her wrestling career in late 2018, Irie is known as the snow princess idol of AWG. Her signature move, the Dropkick to the Ear, has helped her attain multiple victories. Alongside Tsukiyama, can Irie make her ChocoPro debut a success against the Gatoh Move stalwarts? 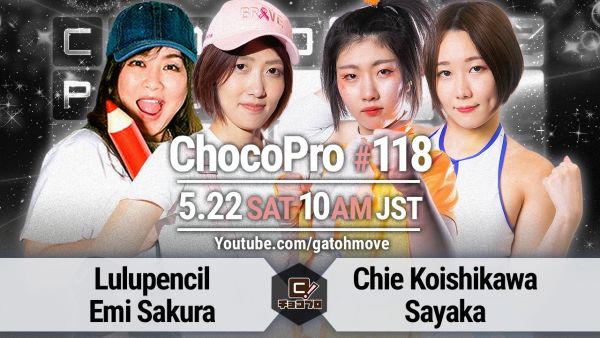 On ChocoPro #118, will “Otoki-san” finally have the number of the self-proclaimed “Ace” of the show? The previous episode saw Tokiko Kirihara team up with Yuna Mizumori in a losing effort to Mei Suruga and Baliyan Akki, collectively known as Best Bros. However, this wasn’t the first time that Akki and Kirihara met in high-stakes tag team competition. Last month, on episode #109, Kirihara challenged for the Asia Dream Tag Team Championship alongside Black Comaneci partner Antonio Honda. Once again, despite a valiant effort, Kirihara failed to pick up a victory.

With this in mind, whenever Kirihara faced Akki in singles competition, she would prove herself as a formidable foe. Compared to her fourth-generation Gatoh Move contemporaries, Kirihara is physically imposing, able to use a combination of strikes and submissions to keep her opponents in check. It has been said offense that led her to sporadic singles victories, most recently against Actwres girl’Z star Yuko Sakurai. If there’s any fourth-generation star that can take the fight to Akki, one would argue it’d be the master of the “Comaneci” herself.

For these reasons, Baliyan Akki versus Tokiko Kirihara is a main event worth keeping an eye on. In Akki’s eyes, as one-half of the Asia Dream Tag Team Champions, a loss won’t stand. On the other side of the coin, Kirihara has come up short against Akki, in singles competition, time and time again. This will be their sixth singles match against one another; in the previous five, Akki emerged victorious. Can Kirihara shift the proverbial ledger, picking up that elusive singles win against the high-flying, hard-hitting star from India? Tune into ChocoPro #118 to find out.