Professional wrestling is built on the stories told in and out of the ring. These often come in the form of rivalries, pitting opposing forces against one another in pursuit of bragging rights, championships, and success. This time, we take a look at a sibling rivalry taken to the highest level, as we discuss the feud between Bret Hart and Owen Hart.

Among the various wrestling dynasties throughout history, The Hart Family may be the most interesting. Long-time wrestler and Hart Dungeon trainer Stu Hart and his wife, Helen, bore and raised 12 children. The boys grew up to become involved in the wrestling business, to varying degrees, such as refereeing, booking, and in-ring competition. However, the two sons to Stu and Helen that achieved the most were the eighth-born child, Bret Hart, and the final, twelfth-born child, Owen Hart. 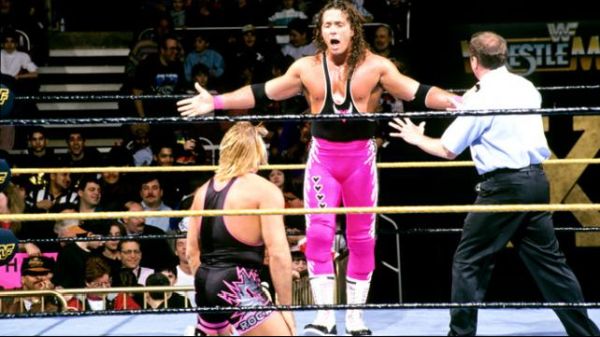 The legacy of Bret “Hitman” Hart can’t be understated. In the World Wrestling Federation alone, he became a two-time Tag Team Champion, two-time King of the Ring winner, and five-time World Champion, just to name a few accolades. All the while, he lived up to his moniker of “The Excellence of Execution,” utilizing a grounded, technical style to pick apart his opponents. From a reliable tag team specialist to the undisputed face of the WWF’s “New Generation,” he worked from the bottom to become a prominent singles star.

Not unlike his older brothers, Owen Hart trained in the Hart Dungeon before working for Stampede Wrestling, his father’s regional promotion in Calgary, Alberta, Canada. Owen debuted for the WWF in 1988, though under the alias of The Blue Blazer. Owen’s next WWF run began in 1991, teaming with Jim “The Anvil” Neidhart to form The New Foundation. Owen would also briefly tag with Koko B. Ware, creating High Energy. While neither team clicked, “The Rocket” would receive his big break in 1993.

In mid-1993, Bret was embroiled in a feud with Jerry “The King” Lawler. By this time, Hart was an established singles star, having won the WWF Championship for the first time the year prior. Bret’s feud with Lawler reached a new high at the Survivor Series 1993 pay-per-view. It was here where “The Hitman” and three of his brothers would take on Lawler and his Knights in a traditional 4-on-4 elimination match. Due to various circumstances, Lawler could not appear on the show; as a result, he was replaced by Shawn Michaels, who was a two-time Intercontinental Champion at this point. Whether it was Lawler or Michaels in this spot, the spotlight would ultimately be Bret and Owen’s. 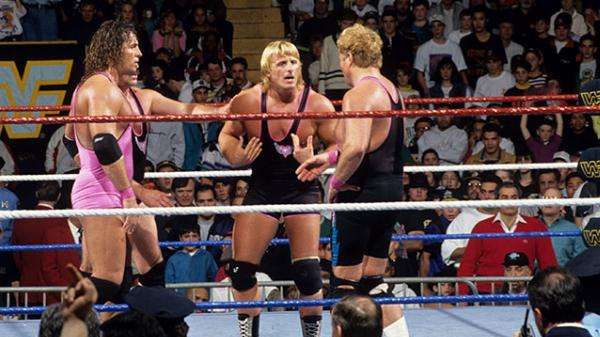 The Beginning of the Feud

On November 24, 1993, Survivor Series took place from Boston Garden. In one of the traditional elimination matches, Bret Hart teamed with his brothers Owen, Bruce, and Keith, with Hart Family patriarch Stu standing at ringside. Their opponents were Shawn Michaels and his masked Knights, each dressed in black, blue, and red. In an interesting piece of trivia, these Knights were Jeff Gaylord, Greg Valentine, and Barry Horowitz, respectively.

Of all the Hart brothers in the match, Owen had perhaps the best performance. Case and point, he eliminated two of the Knights in under a half-hour. However, things would turn pear-shaped, as Owen inadvertently crashed into Bret, sending the latter off the apron and onto the floor below. As the rest of the family checked on Bret, Owen was rolled up from behind by Michaels, being the only member of The Hart Family to be eliminated from the match. Though The Hart Family won, Owen was frustrated, to say the least. On the surface, this seemed like any familial squabble, with family members venting before patching things up. However, this was simply the calm before the storm.

Following Survivor Series 1993, Owen took part in a sit-down interview with WWF commentator Vince McMahon. Owen aired his grievances with the aforementioned match, believing he was living the show of Bret. From there, Owen challenged his brother to a one-on-one match. In response, Bret leaned toward repairing the developing rift in the family. In fact, Bret took it upon himself to secure a WWF Tag Team Championship match, with Owen and himself taking on The Quebecers, Jacques and Pierre, at the Royal Rumble 1994 pay-per-view in January. It seemed like the Hart brothers were finally back on the same page.

At the Royal Rumble event, the rift worsened. During the match, Bret and Owen were formidable against the reigning Tag Team Champions. However, during the bout, Bret fell to the outside, injuring his knee. Despite this, as well as insistence from Owen to tag him in, Bret persevered as the legal man. Bret attempted to apply his signature Sharpshooter, but due to the damage done to his knee, the maneuver couldn’t be fully applied. As a result, the referee called for the bell, awarding the match to The Quebecers.

To say that Owen Hart was unhappy with his brother would be an understatement. In a fit of rage, Owen kicked Bret Hart’s injured leg, leaving his older brother in a heap. Keep in mind that both Harts were scheduled for the Royal Rumble match later in the evening. Given the damage done to Bret’s knee, fans wondered if “The Hitman” would even make it to the match. Bret persevered, but more importantly, he ended up becoming co-winners alongside Lex Luger in a controversial finish. This only intensified the frustration of Owen, who not only lost in the Tag Team Title match earlier in the night but was eliminated in the very same Royal Rumble by Diesel. It was decided, at WrestleMania X, the WWF Championship would be defended twice. While Luger would face the reigning champion, Yokozuna, first, Bret would challenge the titleholder in the main event.

The feud between Bret and Owen Hart continued into WrestleMania X, which took place on March 20, 1994. In the opening bout, the Hart brothers squared off for the first time. This encounter went a little over 20 minutes, showcasing the nefarious tactics of Owen in contrast to the straightforward approach of Bret. The match concluded when Owen rolled up an unsuspecting Bret for the three-count, securing a victory over one of the Royal Rumble winners. While Owen’s night was done, from an in-ring standpoint, Bret’s was only beginning.

Later in the show, Yokozuna defeated Luger via disqualification. This occurred when Luger argued with Mr. Perfect, the special guest referee, as he was tending to the fallen Mr. Fuji and Jim Cornette. After Luger shoved Perfect, the star-spangled Royal Rumble winner was disqualified. This resulted in a victory for the WWF Champion in Yokozuna. The main event saw Yokozuna defend against Bret in a match that went a little over 10 and a half minutes. This match concluded with Yokozuna miscalculating his Banzai Drop, allowing Bret to secure a quick pinfall victory. Now a two-time WWF Champion, Bret celebrated with fellow fan favorites such as Razor Ramon and “Macho Man” Randy Savage while a seething Owen glowered from the entranceway. Once again, in his mind, “Brother Bret” stole the spotlight.

Though they remained intertwined in the months that followed, Bret and Owen Hart took part in separate endeavors. As WWF Champion, Bret feuded with Diesel, another budding star in the company. Meanwhile, in 1994, like his brother before him, Owen won the King of the Ring tournament. More so, Owen aligned himself with Jim Neidhart, Bret’s former tag team partner. With this victory, Owen earned a WWF Championship match against Bret. This would take place at SummerSlam, on August 29, 1994, in a Steel Cage Match. With this stipulation, the sibling rivalry playing out in front of fans reached a violent, new level. 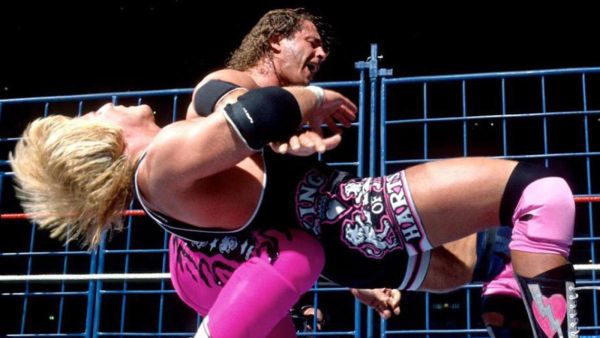 Bret Hart vs. Owen Hart in a Steel Cage

At SummerSlam, Bret and Owen Hart shared the same goal: to inflict pain on one another. However, while Owen fought with animosity in his soul, Bret simply desired to end their feud once and for all. This took place within the confines of a steel cage, the Hart brothers battling between walls of blue bars. If they weren’t attempting to one-up the other by escaping the cage early, they showed no restraint in delivering pain, evidenced by Bret’s superplex on Owen from the top of the steel structure.

The match ended when both brothers attempted to escape over the top. However, Bret attacked Owen, causing “The King of Harts” to get caught in the cage, unable to move. This allowed “The Hitman” to drop to the floor and escape with his WWF Championship intact. However, a post-match beatdown on Bret from Owen and Neidhart, complete with Hart family members attempting to intervene, showed that this battle wasn’t over.

Bret remained WWF Champion up until Survivor Series the following November. On this night, he was challenged by Bob Backlund to a submission match for the title. Due to further Hart family antics, Bret was caught off-guard by Backlund’s crossface chickenwing. Feigning concern for his older brother, Owen pleaded with his parents, Stu and Helen Hart, to throw in the towel. Unable to see her son writhe in pain any longer, Helen did exactly that. Though Owen never became WWF Champion, “The King of Harts” was elated knowing that his older brother was not any longer. Bret and Owen continued to feud until early 1995. Ultimately, “The Hitman” finally silenced his younger brother.

Bret and Owen Hart remained adversarial until 1997. By then, “The Excellence of Execution” had become a hated villain. He decried the WWF for becoming what he believed to be crude, failing to reflect his values. To this end, Bret assembled a group of allies he knew he could trust. He recruited Owen and brother-in-law, The British Bulldog, both of whom had their issues with one another as former Tag Team Champions. From there, the group would be joined by Neidhart and Brian Pillman. Together, The Hart Foundation was back in business and stronger than ever. The faction remained active until Survivor Series later that year, the event that became the scene of the infamous “Montreal Screwjob.” 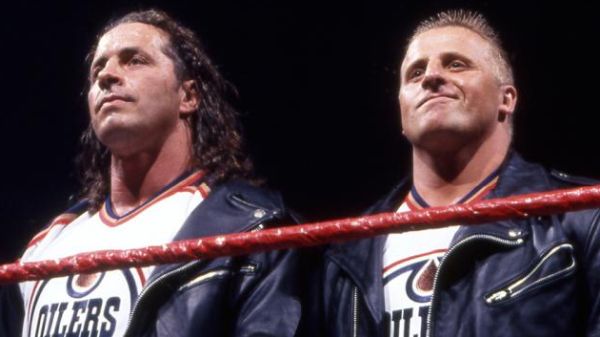 Sibling rivalries are among the most relatable stories on television. Those that have brothers or sisters will attest to the feuds that can develop, even over the most trivial of circumstances. However, in professional wrestling, virtually everything is taken to the next level. This was especially true when Bret Hart found himself embroiled in a feud with his younger brother in Owen Hart. As they played their family tragedy out on screen, they were able to create multiple matches that fans remember to this day. In the words of The Hollies, “He ain’t heavy, he’s my brother.” Without question, the impact of this legendary feud is everlasting.