With Golden Week in Japan in the rear view, Gatoh Move Pro Wrestling is set to return to Ichigaya Chocolate Square with a new episode of ChocoPro. This is a one-match event, and despite the seemingly small scale of the card, there’s no lack of depth to be seen here. If you have time next week, this will be a show to tune into the Gatoh Move YouTube channel to see. Here is what viewers can expect on ChocoPro #115. 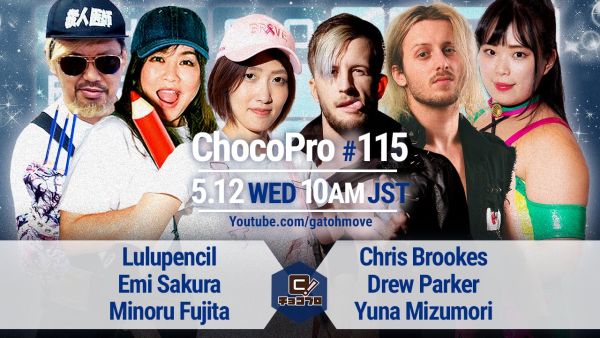 On ChocoPro #110, Pencil Army lost a member. Ironically enough, this was another one-match show. The Pencil Army quartet, Lulu Pencil, Emi Sakura, Minoru Fujita, and Chris Brookes, teamed up to take on the four-wrestler squad of Chie Koishikawa, Hagane Shinnou, and the Asia Dream Tag Team Champions, Mei Suruga and Baliyan Akki, the latter also known as Best Bros. Despite a valiant effort by Pencil Army, Koishikawa picked up the submission victory by causing Lulu Pencil to tap out.

Post-match, an irate Brookes verbally lashed out at the Pencil Army commanding officer. He took offense to Lulu Pencil not only losing, once again, but surrendering, which made him feel especially insulted. During this verbal onslaught, he even targeted Sakura and Fujita, calling them “geriatric idiots” for allying themselves with Lulu Pencil. After taking a pair of scissors to his own Pencil Army hat, he stormed off, leaving the group in the process. This left a hurt Lulu Pencil behind, not because her team lost the match but that she lost someone she considered a friend.

Now, on ChocoPro #115, the remaining three Pencil Army members will be in action. Their opponents will be Pencil Army turncoat, Brookes, as well as Yuna Mizumori and Drew Parker. Mizumori hasn’t wrestled a ChocoPro match since the first day of episode #100, where she unsuccessfully challenged Kaori Yoneyama for the PURE-J Openweight Championship. Since then, “The Pineapple Girl” has appeared for various organizations, including World Woman Pro Wrestling Diana and Actwres girl’Z. She also has history teaming alongside Brookes, which makes her that much more worthy of being a partner.

Making his ChocoPro debut is another individual that shares history with Brookes in Drew Parker. “The Urchin Prince” has regularly teamed with Brookes over the years, most recently for deathmatch organization Big Japan Pro Wrestling. Parker is a deathmatch enthusiast in his own right, evidenced by such accolades as 12 reigns as HOPE Wrestling‘s 24/7 Hardcore Champion. Parker’s unique breed of deathmatch combat and technical ability makes him an opponent to keep an eye out for. Given the combined skill sets of “Yunamon” and Parker, Brookes seems well-equipped to face the Pencil Army trio.