For the next several episodes of ChocoPro, viewers should expect considerable crossover with Actwres girl’Z. Recently, viewers have seen the likes of Ayumi Hayashi and Waka Tsukiyama appear within the confines of Ichigaya Chocolate Square, bringing their own colorful, competitive approaches to the mix. What should viewers expect as ChocoPro #111 draws near? Take a deep dive into the confirmed action to come. 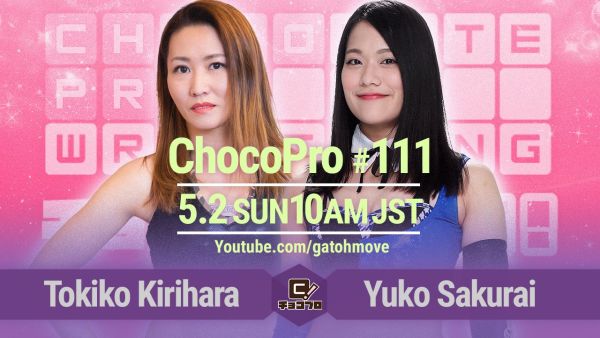 Making her ChocoPro debut, straight from Actwres girl’Z, is Yuko Sakurai. She began her professional wrestling career in 2018, debuting for AWG’s inaugural Korakuen Hall event. Since then, she’s been an AWG regular, though she has made appearances for other joshi puroresu promotions including REINA and Ice Ribbon. Despite her relative experience, she possesses considerable physical strength, which makes her the perfect opponent to go against Tokiko Kirihara.

Most recently, on episode #109 of ChocoPro, “Otoki-san” came up short in an Asia Dream Tag Team Championship match, where she and Antonio Honda fell to Best Bros. Now, Kirihara plans on getting things back on track against her fellow rookie. Who will emerge victorious in this opening encounter? 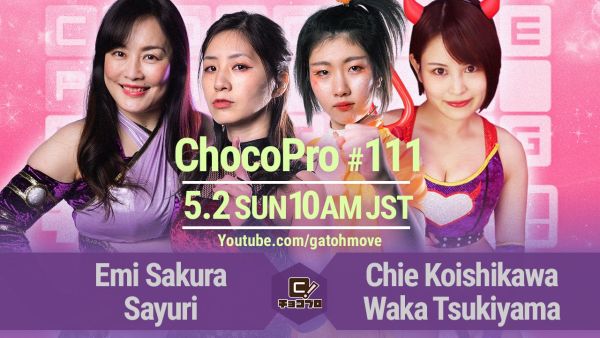 Emi Sakura and Sayuri vs. Chie Koishikawa and Waka Tsukiyama

On episode #107 of ChocoPro, an energetic force faced a devilish opponent. Chie Koishikawa battled Waka Tsukiyama, for the first time, within the confines of Ichigaya Chocolate Square. This match ended with Koishikawa besting the AWG star, picking up her first singles victory in the process. It was clear that respect had developed between the two stars since then. In fact, it may be said respect that leads them to victory in Tsukiyama’s return to Ichigaya.

Koishikawa and Tsukiyama will battle the combined forces of Emi Sakura and Sayuri. For Sakura, this will be a vital match, especially given the loss that Pencil Army suffered on the previous episode of ChocoPro. Meanwhile, Sayuri has more momentum behind her; on episode #109, she teamed with Koishikawa and Sayaka in a winning effort over Pencil Army’s own Sakura and Lulu Pencil. Can Gatoh Move Pro Wrestling‘s founder and “Kunoichi” pick up the victory over their colorful, exuberant opponents? 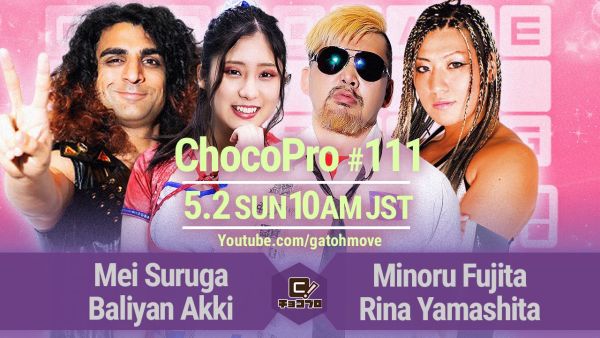 On the previous episode of ChocoPro, Best Bros teamed with Egg Tarts, the duo of Chie Koishikawa and Hagane Shinnou, in a winning effort over the Pencil Army quartet. To say that this was a fierce battle would be an understatement. Ultimately, like most of their tag team encounters, Mei Suruga and Baliyan Akki emerged victorious. However, on this upcoming episode, they will face a formidable pair in the form of the current Super Asia Champion and a star making her first-ever Gatoh Move appearance.

Minoru Fujita is the current Super Asia Champion, an accolade he won by defeating Akki on Day 2 of ChocoPro #100. Though his success as a Pencil Army member may leave something to be desired, on his own, there are few that are as formidable. This begs the question: who will be the wrestler to ultimately dethrone him for the Super Asia Championship? For the time being, such a query must be cast by the wayside.

This match will see Fujita team with Rina Yamashita, who fans of Japanese independent wrestling will be familiar with. Having debuted in 2013, Yamashita has gone on to work for multiple joshi promotions ranging from Pro Wrestling WAVE to SEAdLINNNG to PURE-J and beyond. It’s also worth noting that, in Pro Wrestling FREEDOMS, she is one-half of the King of FREEDOM Tag Team Champions alongside the title-hunter himself, Fujita. In this battle of tag team titleholders from separate promotions, only one can win.