It’s almost time for the season seven premiere of ChocoPro! Season six was full of exciting matches and thrilling surprises. These ranged from showdowns for championship gold to property damage being caused to the grief of dojo owners. Simply put, Gatoh Move Pro Wrestling pulled out all the stops last season. As anyone who has watched ChocoPro at length will attest, season seven should be no different. Here is a rundown of the action to expect as the Gatoh Move crew prepares to write a new chapter in their story. 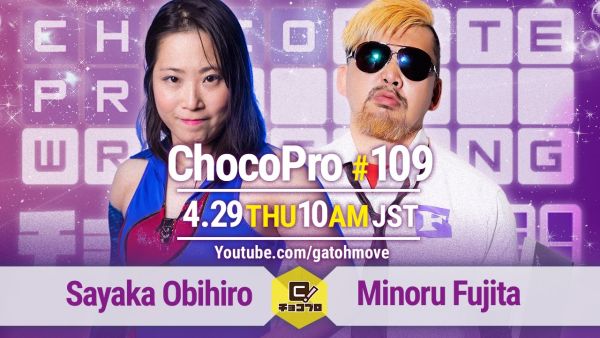 This will be an important match in the extensive career of Sayaka Obihiro. For those that have been following Gatoh Move on Twitter, this is Obihiro’s 11th-anniversary match. The “Blue Heart” of Gatoh Move began her professional wrestling career in 2010, training under Emi Sakura in Ice Ribbon. Over the years, Obihiro would pick up multiple tag team accolades. These included the International Ribbon Tag Team Championship, which she won alongside Aoi Kizuki and Kyoko Kimura on separate occasions. Obihiro would also become one of the pillars of Gatoh Move during its early years, helping build it to what it has become today. In her anniversary match, she will take on Minoru Fujita, the current Super Asia Champion. This will be a non-title encounter, though the title won’t be the focal point. Rather, it will be Obihiro herself. Celebrate her career on ChocoPro #109. 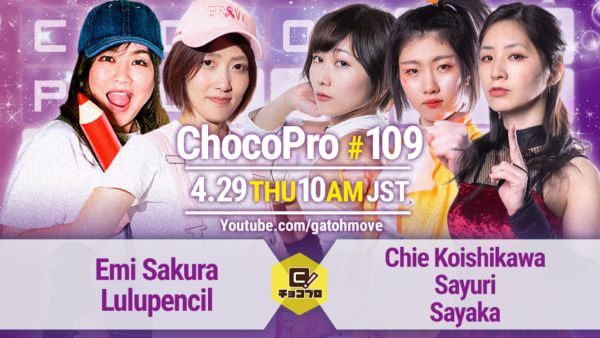 The second match set for ChocoPro #109 will fit two Pencil Army representatives against three fourth-generation Gatoh Move stars. Long-time ChocoPro viewers will attest to the fact that while Emi Sakura and Lulu Pencil fight valiantly, as Pencil Army, their rate of success has left something to be desired. In fact, Lulu Pencil has recently come under fire by fellow teammate Chris Brookes, who said that they better win the next time they team up. On this upcoming show, Sakura and Lulu Pencil will challenge the trio of Chie Koishikawa, Sayuri, and Sayaka in a 2-on-3 handicap match. One could make the argument that this puts the underdog tandem at that much more of a disadvantage. However, given the wily nature of Sakura and the sheer determination of Lulu Pencil, perhaps this is where their luck will take a turn for the better. 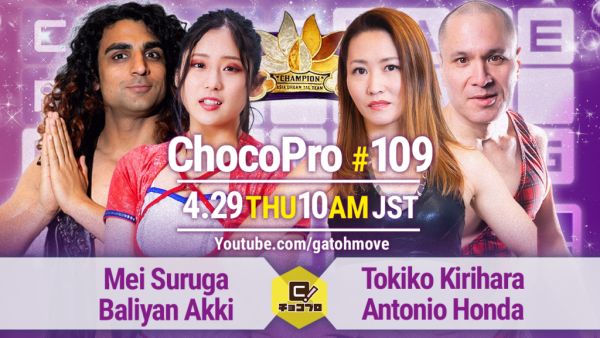 Wrapping up the premiere episode of ChocoPro season seven will be an Asia Dream Tag Team Championship match. In the main event of the season six finale, Best Bros defended their titles against the grungey, underhanded duo of PSYCHO and CHANGO. This was perhaps the biggest challenge Mei Suruga and Baliyan Akki faced to date; they had to use their wits, athleticism, and teamwork to overcome the nefarious antics of their challengers. Ultimately, following a brutal contest, Best Bros came out victorious. In the proverbial shadows, however, lurked future challengers.

Black Comaneci, the duo of Tokiko Kirihara and Antonio Honda, has proven to be a force in season six. In fact, the past three matches they teamed up in, which were on episodes #100, #104, and #107, Kirihara and Honda emerged victorious. This team has been beneficial to Kirihara, as “Otoki-san” has been on a winning streak with Honda by her side. Meanwhile, Honda, who wrestling fans may know for his various appearances in DDT Pro, has found himself a trusted, hard-hitting ally. Due to their success on ChocoPro, it only made sense for them to challenge for the Asia Dream Tag Team Championship, even at the reluctance of Emi Sakura.

The first main event of ChocoPro season seven has tremendous stakes. A successful defense would be invaluable for Best Bros, as they will be able to start the season on a high note. Furthermore, there have been few duos as successful as Suruga and Akki on the show. However, Black Comaneci coming away with the titles may be even greater. This is especially true for Kirihara; if she wins, alongside Honda, she will be the first fourth-generation Gatoh Move star to win championship gold. For those that may have been on the fence about tuning into YouTube for this show, the stakes in question should be enough to convince you to check it out.