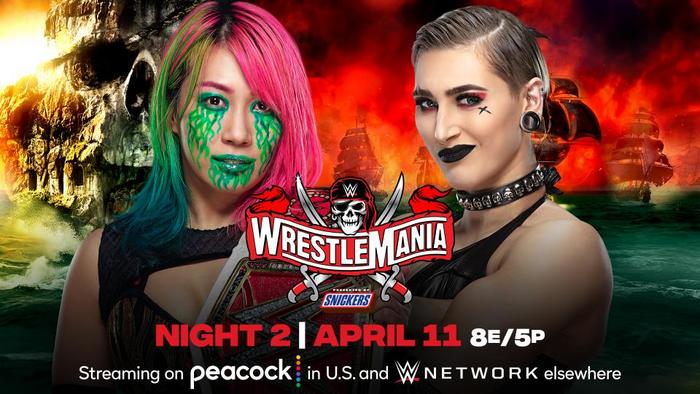 It felt like there was a year that went by that WWE was teasing the Raw debut of Rhea Ripley, but on the first night she showed up, she laid down the perfect challenge for Asuka and the Raw Women’s Championship. The build wasn’t something that got an immense amount of time but you know the caliber of the two athletes would promise a fantastic encounter for the gold. And that’s what they gave you on Sunday night.

From the moment the match started, Asuka and Ripley tore it up, almost having no time to waste in hopes of stopping each other. At one point during the match, the two women were on the apron and Asuka hit a stunning DDT on Ripley to the floor that would have stopped any woman. But the challenger would not be denied bringing her brutality and winning the Raw Women’s Championship.

Asuka attempted to put an end to Ripley once and for all, but the young challenger reversed a kick into the Riptide, allowing Ripley to get the final fall and to win the Raw Women’s Championship. Asuka did everything in her power to raise the division of Raw, but this is Ripley’s time and many of us have to believe it’s just the beginning for the champion.

What should be known is this. All four women on both nights delivered and showed that the women’s division is in great hands moving forward as two new champions were made stars on “The Grandest Stage of Them All.” 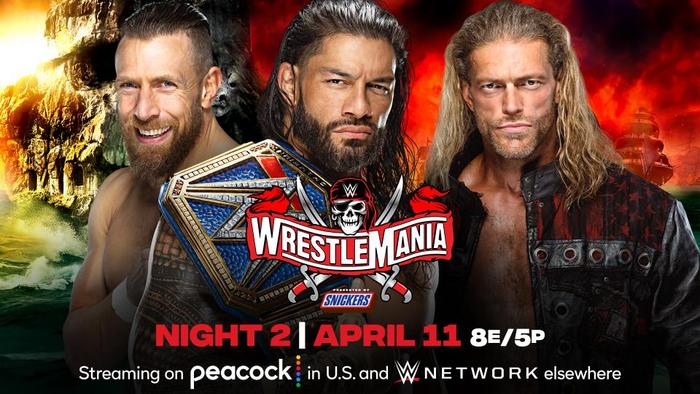 The story that brought WWE to the main event of WrestleMania 37‘s night two is what shows that when it comes down to it, they can still be among the best in all of wrestling. Edge won the Royal Rumble, Roman Reigns continued his dominance on top of the WWE, and Daniel Bryan wanted one more shot in the main event of WrestleMania. It ended up bringing the best out of all three men in an effort to put on the best match possible and that’s exactly what it did.

All three men embraced the return of the crowd when they made their way to the ring, but it was quick to remember the bad blood between all of them. What went down after the excitement of having fans back was one of the best triple threats in WrestleMania history. Remembering what all these three went through to get to this stage only enhances the match, bringing great emotion for wrestlers and fans alike.

The three styles of the men are vastly different, but they managed to show the greatness of each one which made it better. Early in the match, Jey Uso played a major factor as he would take out both Edge and Bryan with superkicks. It eventually led to Edge having enough, laying out the 2021 Andre The Giant Battle Royal winner with a DDT on the steel steps. Paul Heyman‘s face told the story when this happened, as the help for “The Tribal Chief” was gone for the time being and it would be down to the champion to try and retain. Daniel Bryan managed to get both men into the Yes! Lock at one point, but it proved to not be enough.

This match had everything you would ask for in a triple threat — plunder, technical prowess, and just some great professional wrestling. The closing sequence saw Edge smash Bryan’s skull in a con-chair-to with an aim to do the same to the champion. This is when Uso would make the save, stopping Edge long enough for “The Head of the Table” to get his composure and hit a devastating Spear on Edge. “The Rated R Superstar” got what was coming to him, as Reigns paid him back with a con-chair-to of his own before pinning both Edge and Bryan in the middle of the ring following an epic match.

It was yet another instance where the right match went on last, being the best of the night and seeing Reigns stand tall above all to end the show.

Night one opened up so beautifully, seeing Bobby Lashley and Drew McIntyre go to war. And while night two went on without a hitch like night one, Randy Orton’s long-awaited match with “The Fiend” was not able to match the quality that the first-night opener did. It didn’t come close really, as the red light of “The Fiend” returned and fans were simply not connected. The biggest plus was the Luke Harper / Brodie Lee tribute from Bray Wyatt. In the end, it was Alexa Bliss in a new character who screwed over “The Fiend,” causing distraction and allowing Orton to hit the RKO for the win. It’s rather mind-boggling to think what could be next for “The Fiend” and Bliss but fans are clearly over it.

Next up was the WWE Women’s Tag Team Championship match, which was made official last night when Natalya and Tamina survived Tag Team Turmoil to secure their spot. While this match was better than the opener, it was nothing to write home about as the result didn’t surprise when Nia Jax and Shayna Baszler survived. Just a tough opening to the night, but meant the highly anticipated matches made for a strong rest of the night.

Kevin Owens versus Sami Zayn at WrestleMania seemed like a pipe dream for fans. But this year, the fans got exactly that. And while a lot of it had to do with the conspiracy that Zayn believed in and even had Logan Paul involved, these two men did exactly what you would hope for — deliver. It felt as though it was a vintage night for Zayn, who hasn’t been the master wrestler he has in his current role as “The Great Liberator,” and it was as though he and Owens turned back the clock to when they first came to WWE or even before. These two told a story worthy of WrestleMania. Ultimately, Owens walked out with the win via Stunner and hit Paul with one for good measure as well. A great match to get WrestleMania on track.

While Sheamus’s challenge for Riddle’s United States Championship wasn’t made until the last few weeks, but they wrestled as if they were feuding for months upon months. The ability they showed in their match to hit each other with everything in their arsenals made for the best match of the night to this point. It was very on character for Sheamus, who seems to have been going 110% since he returned from injury. The finish came when Riddle went for a springboard moonsault and was met with a devastating Brogue Kick, seeing Sheamus win his first singles title since 2015. A very much deserving one at that considering the hardworking he has been putting in. Exactly what you would expect from these two.

The story that Big E and Apollo Crews developed was deserving of a match at WrestleMania with the Intercontinental Championship on the line. The animosity between the two felt worthy of the biggest stage and they even went to a stipulation as the first-ever Nigerian Drum Fight would be underway. Big E and Crews started the match off swinging for the fences with kendo sticks, making any fan wince in pain. The drums that surround the ring rarely came into play, but rather these two just brought it all night long. The only shame of it all is that the finish saw a run in as the former Dabba-Kato from Raw Underground laid out Big E, aligning with Crews and giving him the win. Interesting enough, this was the theme for The New Day this weekend.

If you read above already, you understand how great Asuka and Rhea Ripley was. It was the second straight night where WWE went against the grain of recent years and made new stars in the women’s division with Ripley winning the championship. “The Nightmare” joined Bianca Belair by turning the future into the present with the win. Perhaps the best part of it all was that Ripley went toe-to-toe with Asuka in physicality, something few women can really do. The next steps for Ripley will be interesting, as challengers are likely to line up with a certain “Queen” being first in line after last year’s events.

And finally, the main event. Roman Reigns’ current run on top is becoming an all-time run ladies and gentlemen. The ability to have fans all in on the story at hand no matter what is of the highest caliber, while being able to also show up in his matches. If you look at the landscape of professional wrestling today and especially WWE, there are only a few that are able to do that so consistently. But all the credit for the beautiful main event doesn’t just go to Reigns but Edge and Daniel Bryan as well. Without the addition of Bryan, this almost would have never managed to be this great. It was a case of fulfilling in the biggest spot of the year and for that, WWE should kick off their new year of sorts at a high they haven’t been at in over a year. That makes WrestleMania 37 the show that anyone could have hoped for.