Alex Colon attaches his name to a show that will pay tribute to deathmatch wrestling as Planet Death helps to round out The Collective.  This show will feature a tribute match for Danny Havoc who passed away last year as well as Jimmy Lloyd and G-Raver colliding to continue their very personal cross-promotional rivalry.

American deathmatch legend Mad Man Pondo steps into the ring with a man who has become synonymous with the style.  Throughout his 20+ year-long career, Pondo has competed in some of the top deathmatch companies in the world including Japan’s Big Japan Pro-Wrestling (BJW) and was a long-time regular for IWA Mid-South. If you can name a deathmatch icon then Pondo probably wrestled them.  Pondo will need to put all of his experience to use against Justice.  Justice has made a name for himself outside of the deathmatch world, namely in Absolute Intense Wrestling, but has also competed in some brutal deathmatches for some of the premiere deathmatch companies today.

With a combined roughly 35 years of experience in the ring, you can be sure that both Ryan and MASADA know how to inflict hurt on their opponents.  Ryan won the 2020 King Of The Deathmatch tournament, a tournament MASADA won in 2009.  In addition to the KOTD tournament, MASADA has won multiple Tournament Of Deaths in Combat Zone Wrestling (CZW) as well as the Nick Gage Invitational and Texas Death Match Massacre tournaments in the past.  Eric Ryan is very much still the present of deathmatch wrestling and MASADA will be out to prove that his best days aren’t behind him.

Jason Gory and Brandon Kirk may not know what they’re in for with this match as it promises to be a war between Lloyd and Raver.  G-Raver suffered an injury in 2019 that put him on the shelf for 14 months.  It was Jimmy Lloyd who inadvertently caused that injury but Raver never forgot, and upon his return, he didn’t wait long to go right after Lloyd.  Things only got more heated from there with the two competing in a No Rope Barbed Wire match just last month at GCW Take Kare.  With their chosen tag team partners added to the mix, this one is sure to ramp up the insanity that this feud has brought. 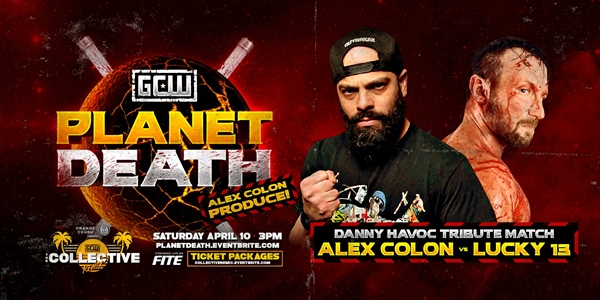 At Planet Death we will see Alex Colon take on Lucky 13 in a match paying tribute to Danny Havoc.  There may not be two better performers to pick for such a match as both men have long and storied histories with Havoc.  Lucky 13 wrestled alongside Havoc in the Nation Of Intoxication faction and even held the CZW tag titles with him through the Freebird rule. Before teaming together Havoc and Lucky 13 competed with one another often on the deathmatch circuit.  While Lucky 13 was used to teaming with Havoc, Colon was often his enemy.  Colon twice went to war with the Nation Of Intoxication and had a number of major single matches with Danny Havoc throughout the years.  Before Havoc’s passing, he and Colon had begun teaming together including during GCW’s tour in Japan.  These two veterans will no doubt put it all on the line to showcase the beauty of deathmatch wrestling in honor of Havoc.

You can watch EFFY’s Big Gay Brunch live or on-demand as part of GCW’s The Collective on FITE. You can purchase the event individually or as part of the Collective bundle.