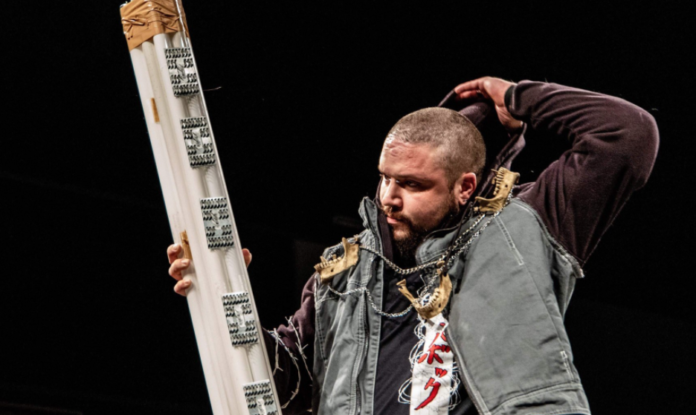 Sad news on Sunday night as the hardcore wrestling community suffers the loss of one of its biggest pioneers of the 2000s, as news broke that Danny Havoc had passed away. No cause of death was given. Its tragedy is even sadder coupled with the recent passing of his wife, Brianne Berkland, only a few weeks ago on April 4.

With a broken heart, the GCW family mourns the loss of Grant Berkland aka Danny Havoc.

Grant Berkland grew up in Iowa a lifelong fan of professional wrestling, backyard wrestling with his highschool friends. In 2005, after attending Combat Zone Wrestling (CZW) Cage of Death 6, he traveled to Philadelphia to find work with the company. His passion won the company over and he began training with CZW, making his debut that June at CZW Tournament of Death 4. In 2007, he won his first title in CZW, the CZW Junior Heavyweight Championship.

While he was near synonymous with CZW for over a decade, he also competed for other hardcore promotions, such as IWA Mid-South, and internationally with companies like Big Japan Wrestling (BJW), KAIENTAI, and DDT Pro in Japan, plus Mexico’s Desastre Total Ultraviolento (DTU) and Germany’s Westside Xtreme Wrestling (wXw).

In 2015, he made his debut with the rebooted Game Changer Wrestling (GCW, formerly Jersey Championship Wrestling) and a year later debuted with Matt Tremont‘s Hardcore Hustle Organization (H2O). But in 2017, In 2017, he stepped away from the ring. A 12-year pioneer of American deathmatches in the 2000s, mounting injuries forced Havoc to walk away from the business. Danny Havoc retired a 2x CZW Tournament of Death winner (2008, 2013), a former 2x CZW Ultraviolent Underground Champion, CZW World Junior Heavyweight Champion, and 2x CZW World Tag Team Champion, and the 2016 winner of the GCW Tournament of Survival. He was also an IWA M-S Deathmatch Champion and H2O Tag Team Champion.

In October of 2019, Havoc returned to the ring with H2O for a charity event, but the one-off turned into a return to active duty. He returned to GCW for four events in early 2020, including as part of their tour of Japan, where he not only competed for GCW but Pro Wrestling FREEDOMS. He was also featured in the Deathmatch episode of the VICE series, “The Wrestlers”.

Last Word on Pro Wrestling sends its deepest condolences to the Berkland family and Danny Havoc’s friends, peers, and fans around the world. Stay tuned to the Last Word on Pro Wrestling for more on this and other stories from around the world of wrestling, as they develop. You can always count on LWOPW to be on top of the major news in the wrestling world, as well as to provide you with analysis, previews, videos, interviews, and editorials on the wrestling world.

This cuts too deep. Grant "Danny Havoc" Berkland. He was an inspiration to so many and a friend to all and our hearts go out to his family and loved ones.
We can take a small comfort in knowing the entire wrestling community are sharing the same grief right now.#RIPDannyHavoc pic.twitter.com/2AbDxYRb6I

I kept thinking how I wanted to see grant after all this ended, so I can give him a big hug. Now. I can’t.

We love you grant.

Wrestling lost an amazing human being.

The Pro Wrestling & Deathmatch world lost another one of the greats! You have touched us all Danny Havoc. Rest Easy ? pic.twitter.com/8AXRxNiFyu

Love you so much pic.twitter.com/YvJQWSJP7n

I don’t know what to say.

I can’t believe I typed that.

Such a sweet and intelligent person.

I love you, & will never forget you Grant!!

Wrestling fans around their world will never forget you, & the wrestlers you paved the way 4 will never b able to thank u enough.

Words can not express how heartbroken I am. Danny Havoc was my rival, my friend, my family. We have bled together and loved this business together. You are more then just a brother. Grant i love you and will miss you. #ripdannyhavoc pic.twitter.com/BXVIs1WP3p

Danny Havoc always extended kindness to me and welcomed me into the CZW family. My heart hurts for his friends and loved ones.

I met Danny the first time I went to H20. He was so incredibly nice to me. What I didn't realize at the time is that I was in the presence of a deathmatch legend. I was super new to the business but grateful someone showed me such kindness #RIPDannyHavoc

Came close to wresting Danny once. Many years ago, I was booked for a death match tournament. It was scheduled to end with Me vs Danny. He approached me excited months in advance that we were doing it. Didn’t happen though. Wish it did.

I can't put it into words right now…I'm just too heartbroken and devestated. I love you Grant… I'm gonna miss you so much brother ???#RIPDannyHavoc pic.twitter.com/b3ZMv4cJM8

see you next time in another world… love you,

Waking up to this has absolutely broken me.

Grant was an absolute treasure to be around and know. I have such fond memories of each time I was able to spend with him and our lengthy emails back and forth.

I'm gonna miss you so much, mate.

I wouldn’t be who I am today without Danny Havoc.

Absolute genius who never got the credit he deserved.

Im beyond privileged to been able to travel the world with him.

Reach out to your loved one. Life is so short.