H20 Wrestling make their way to WrestleMania week 2021 as part of IWTV’s Showcase Of The Independents.  H20 will not be running a live show in their slot instead they are going to air volume 9 of Subterranean Violence which was taped in their home venue on March 28th.  Let’s take a look at the card for the event.

How far are you willing to go?

Marcus Mathers is set to have a big weekend in florida as he competed for Game Changer Wrestling (GCW) at Jimmy Lloyd’s D-Generaton F in a marquee match..  Before that though we will see the premiere of his mind games deathmatch with ANTHRAXX.  ANTHRAXX seems to be the king of crazed combatant that will be right at home in something called a mind games deathmatch.  While Mathers can get violent and knows many ways to severely damage an opponent i the ring he’ll need to be on his game against ANTHRAXX in such a unique contest. 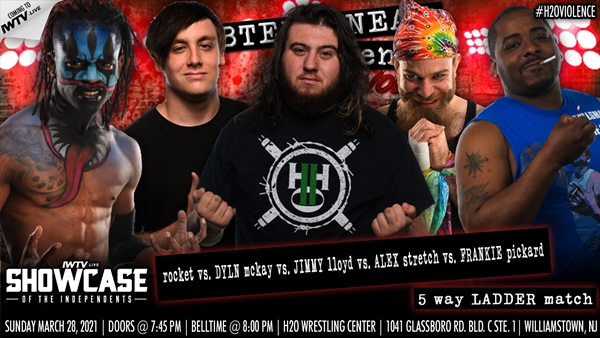 In a match that is sure to steal the show, Jimmy Lloyd joins some of H20’s best for a 5-way ladder match that is sure to be one of the craziest matches we see during WrestleMania Week.  Lloyd is in there with an interesting collection of names including Frankie Pickard who recently returned to GCW during Fight Forever, Pickard has called H20 home for a couple of years now following an extended run in Combat Zone Wrestling (CZW).  Also in the match is Dyln McKay, McKay got his first shot at the big time at Jimmy Lloyd’s D-Generation F at the 2020 Collective where he teamed with Steve Sanders.  Rocket is an interesting addition to the match given his past interactions with Frankie Pickard, the two have wrestled each other three times in the past year and even teamed up recently.  Alex Stretch is the final entrant in this match and he comes in off the back of two consecutive losses in his first two matches in H20.

Austin Luke has one of the biggest matches of his career as he takes on rising indie star Nolan Edward.  Luke, who has dubbed himself Matt Tremont’s best student is a former tag team champion in H20 and has promised to beat Edward in this no-rules match.  Edward is a name that has been on the rise in companies like ICW: No Holds Barred, GCW, SUP, ACTION Wrestling, and more.  Luke may be trained by the American deathmatch legend but Edward has faced some of the toughest men in the business and won’t hesitate to bring the hurt to the loudmouthed Luke.

Use H20’s code HUSTLE to get a free trial of IWTV.  Subterranean Violence Volume 9 will air on IWTV at 6 pm EDT on April 9th.