On Nov. 15, 2020, Utami Hayashishita defeated Mayu Iwatani to win the World of Stardom Championship. In doing so, Hayashishita had finally taken the mantle of being Stardom’s top champion and top star — something that fans expected ever since she stepped into the company. Since then, she has been nothing less than a dominant and impressive champion. Successful defenses against Queen’s Quest stablemate and friend Momo Watanabe, Donna del Mondo‘s Maika, and her AphroditE partner Saya Kamitani have only bolstered her spot as the champion and seen her blossom as a performer. And at Yokohama Dream Cinderella, she will take on her toughest test yet in former World of Stardom Champion, Oedo Tai‘s Bea Priestley. These are all magnificent points that can only further build Utami Hayashishita as the No. 1 in Stardom. However, her placement on the card says otherwise when it comes to giving her the reigns.

Stardom fans were first alarmed by Utami’s defense against Kamitani, as despite being the world champion, she played second fiddle to the Wonder of Stardom Champion Giulia in her hair vs. hair defense against Tam Nakano at the biggest Stardom show possibly ever, All Star Dream Cinderella. But this was seen as understandable. Hair vs. hair matches are something in Joshi that takes precedence over anything else. It’s simply a match filled with great stakes and pure emotion for both the winner and loser. Add in the fact that Hayashishita was defending in the main event for both her defenses prior, and it seemed to be merely a blip on the radar. But when the lineup was announced for Yokohama Dream Cinderella on April 4, Hayashishita was passed up once again for the main event. This time for a Goddess of Stardom Tag Team Championship match featuring four of five Donna del Mondo stars, including Giulia.

That’s why it’s time to question if Stardom is fully invested in Utami Hayashishita as their top star for the present and future or is it just Giulia’s game no matter what Hayashishita does. The popularity of Giulia and Donna del Mondo is undeniable. Fans in Japan and worldwide are drawn into the confident boss-like demeanor of Donna del Mondo after all. But there’s almost always an unwritten rule in wrestling that no matter the popularity of a group or star, the world championship headlines. And considering the importance of these shows that Hayashishita has been playing second fiddle in, you’d think she’d get to defend her title in the top spotlight over Giulia at least once. Add in the fact that Hayashishita carries plenty of fanfare herself and it becomes rather confusing as to why they keep holding her out of the top spot.

Stardom has put everything into Utami Hayashishita since the moment she stepped into the company. She won her block in the 5STAR Grand Prix in 2018 after having just one match in her career before entering. Her magical run was only ended by “The Icon of Stardom” Mayu Iwatani. Yet, she went on to win the Goddesses of Stardom Tag League with Momo Watanabe and began her run of becoming the belt collector of Stardom. At one point, she held four championships at the same time as the “Super Rookie.” It was clear from the start that she was special and Stardom was going to be behind her moving forward. After all, she got to the championship by winning the 5STAR Grand Prix in 2020. So it’s almost worrying that they are hesitating now that she holds the top championship in Stardom.

Perhaps it comes down to trust with Stardom. Giulia delivered in terms of attendance numbers in her first major show main event. Stardom had over 3,000 in attendance at All Star Dream Cinderella, proving to be a grand success. It’s traditional in any entertainment market to do everything in your power to sell the most tickets possible. With such a hope to fill the Yokohoma Budokan, perhaps that is why Hayashishita takes a back seat once again with Giulia already showing she has the drawing power. In Hayashishita’s one major arena main event at Osaka Dream Cinderella, the announced attendance had only just got over the 1,000 mark. To be fair to the world champion, the All Star Dream Cinderella card was far more packed with top matches, having the Stardom returns of SEAdLINNNG‘s Nanae Takahashi and Yoshiko to really help push tickets, so it wouldn’t be right to fully put it on the two Stardom main eventers in either case. And if that’s what Stardom is going off here, Hayashishita can’t compete with that no matter who she faces. 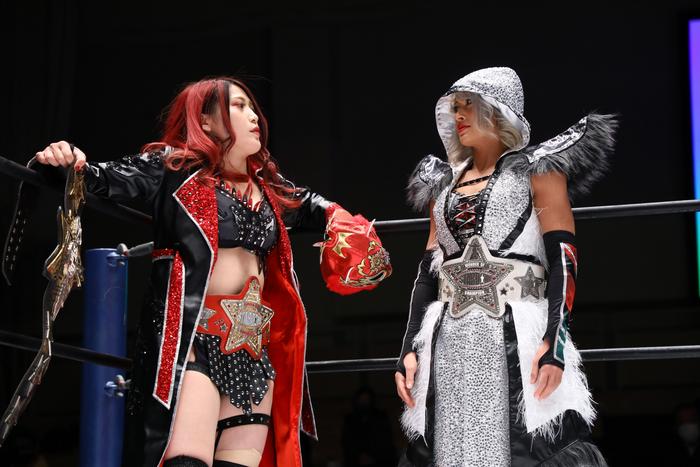 Many believed the reason for Hayashishita’s removal from the main event of the All Star Dream Cinderella came from the hair vs. hair match but also the possibility that Saya Kamitani wasn’t necessarily ready for such a big spot just yet. Those two proved the doubters wrong, having one of the best matches on the entire card and showing the world that they were both ready for that spotlight. Whether it be her match with Watanabe, Maika, or Kamitani, Hayashishita has come out swinging and had some of the best outings of her career in successful defenses. She delivers in the spotlight. Considering that her next challenger is Priestley, a woman who has already held the World of Stardom Championship, it sure feels as though that would be the match made for the main event.

It’s a credit to Hayashishita for continuously proving she is worthy of the spot that she is in through her matches. While some would argue the character must advance from “the future” to “the present,” Hayashishita is doing what she must to be the world champion Stardom wants her to be. Maybe for Hayashishita, it’s continuing to be the performer she has been since the beginning. Being her confident self, “The Red Queen” is powerful and strong in her own way. She just needs to continue to embrace that more and more, showing the world that no one is better and that spot is hers. It’s simply a matter of Stardom going all-in on Hayashishista, something they have already done in the past. Right now, it feels as if it’s the Giulia show and that undermines the world champion, which hurts the prestige and aura that she is trying to build for herself, no matter how hard she tries.

For the fans already “in” on Hayashishita, that is great, but making her feel second rate to Giulia will never allow her to rise to the peak popularity that Hayashishita deserves and Stardom needs in their top champion. Until Stardom is ready to rid themselves of hesitance and fully embrace Utami Hayashishita as their top star, it’s going to hurt her growth as a performer, no matter how hard she tries.