If there’s one thing that Gatoh Move Pro Wrestling has proven over the past year, it’s that everyone is Pencil Army. On this upcoming episode of ChocoPro, deathmatch veteran Minoru Fujita, under the alias of “Mino Pencil,” will reunite with his earnest ally in Lulu Pencil. Can this overlooked yet crafty tandem take home a win as they battle another unorthodox duo? Take a look at the action to come on the official Gatoh Move YouTube channel. 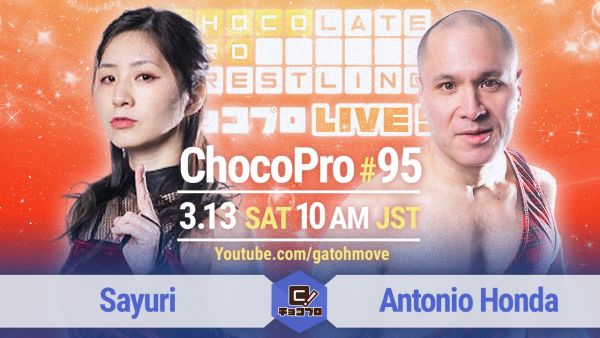 In the opening match of ChocoPro ninety-five, the “Kunoichi” of Gatoh Move will battle one of the wiliest stars to step foot in Ichigaya Chocolate Square. It’s important to note that both Sayuri and Antonio Honda are coming off losses from their most recent appearances. While Sayuri lost a tag team match alongside Chon Shiryu on episode ninety-three, Antonio Honda lost in his own tag encounter the episode after.

It’s also important to note that this is the first time that Sayuri and Honda will meet in singles competition. Sayuri’s ninja-like offense can be deceiving, though it’s safe to assume that Honda won’t come alone, as the equally wily Gon the Fox may be just around the corner. Expect nothing short of shenanigans from this upcoming encounter. 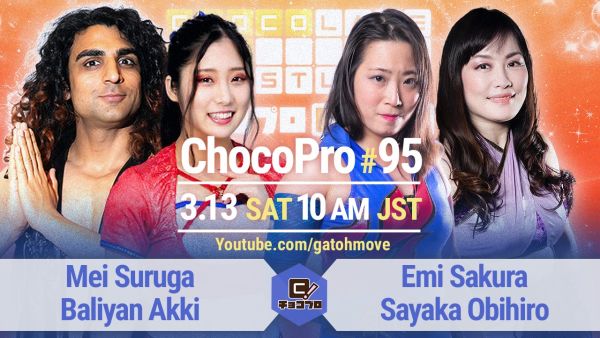 The momentum of Best Bros continues into ChocoPro episode ninety-five. As the reigning Asia Dream Tag Team Champions, Mei Suruga and Baliyan Akki have been nigh unbeatable. Though their singles success has not been as consistent, when Suruga and Akki join forces, there are few teams better. This is especially true in Gatoh Move, as they have battled everyone from TropiCalamari to RESET, coming out victorious in the process.

This upcoming episode will be no different, as Best Bros take on the experienced duo of Emi Sakura and Sayaka Obihiro. These two are no strangers to one another, not only when facing one another but joining forces. Sakura and Obihiro have more experience, which may give them the edge heading into this match against the Asia Dream Tag Team Champions. 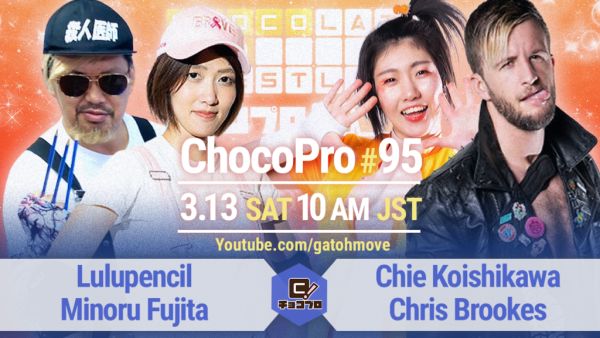 Pencil Army is far from a one-woman show. In addition to Emi Sakura, also known as “Emi Pencil” when donning the overalls, Lulu Pencil has also recruited a deathmatch wrestling veteran. Enter Minoru Fujita, also known as “Mino Pencil,” who has become one of the most unlikely Pencil Arrmy recruits. Japanese wrestling enthusiasts will undoubtedly know of Fujita for his work across various organizations, including Big Japan Pro Wrestling, where he is a former BJW Deathmatch Heavyweight Champion.

This isn’t to say that Fujita is new to ChocoPro, however. In fact, his last appearance on the show took place on episode eighty-two this past January. On this episode, the Pencil Army trio battled Best Bros and Yuna Mizumori in a losing effort. Despite this, “Mino Pencil’s” crafty offense can’t be denied. However, Fujita won’t be the only star making his return to ChocoPro. On the other side of Ichigaya Chocolate Square will stand Chie Koishikawa who, on the previous episode, lost to Kaori Yoneyama in a spirited effort. Looking to get back to her winning ways, Koishikawa has brought in a formidable partner.

Chris Brookes, who is no stranger to Pencil Army’s ranks, will be working alongside Koishikawa to battle Lulu Pencil and Fujita. As a former two-time DDT Universal Champion, Brookes has been one of the most formidable competitors on ChocoPro. His last appearance took place on episode eighty-five, failing to defeat Best Bros for the Asia Dream Tag Team Championship alongside Mizumori. Koishikawa and Brookes teamed up late last year, and while their efforts fell short on episode seventy-four, they plan on getting on the same page to thwart the steadfast Pencil Army duo.