For the first time ever, Gatoh Move Pro Wrestling will hold its first Tuesday morning show; it will be Monday evening for those living on the east coast in the United States. Up until recently, ChocoPro has adhered to a weekend schedule, back-to-back episodes being held on Saturday and Sunday in Japan. Now that Emi Sakura and company have shaken up the formula, what does this crew have in store for fans? Here’s a look at the action to come on what should be a very interesting episode ninety-four. 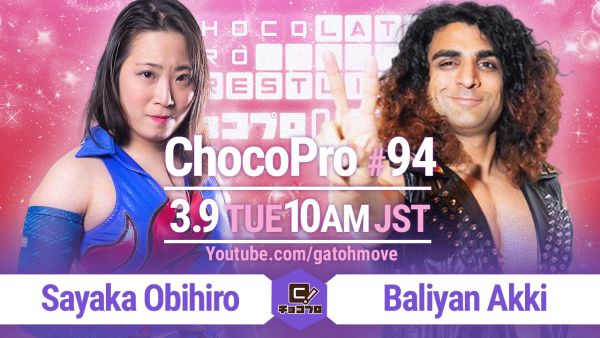 Starting things off will be a singles match between Sayaka Obihiro and Baliyan Akki. The “Blue Heart” of Gatoh Move, Obihiro, made her last ChocoPro appearance on episode ninety-two last month. It was here when she battled the ice-cold Hagane Shinnou in a losing effort. Two episodes later, Obihiro will return to Ichigaya Chocolate Square to battle one half of the Asia Dream Tag Team Champions in Baliyan Akki. This will be the first time that Obihiro and Akki have faced off, one on one, in over ten months. This past May saw them battle it out on the ninth episode of ChocoPro, with the native of India picking up the win. Now, a little under one year later, can Obihiro avenge her loss, or will it be the taller half of Best Bros that picks up yet another singles win? 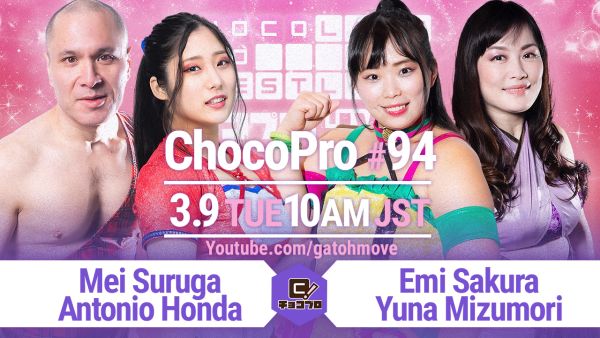 Mei Suruga and Antonio Honda vs. Beauty as Is (Emi Sakura and Yuna Mizumori)

Another match that was set on the previous episode of ChocoPro was the unlikely duo of Mei Suruga and Antonio Honda battling Emi Sakura and Yuna Mizumori, the latter group affectionately known as Beauty as Is. This won’t be the first time that Gatoh Move’s “Apple Girl” has teamed with the Dramatic Dream Team regular; back on episode sixty, this past October, Suruga and Honda teamed up to pick up a win over Mizumori and Chie Koishikawa. Meanwhile, despite their differences in the past, Beauty as Is has proven to be an effective tag team. On the last episode of ChocoPro, they took the fight to Best Bros in what was an early season six best match contender. This upcoming episode will be an opportunity for Sakura and Mizumori to put everything together, potentially picking up a major win as a result. 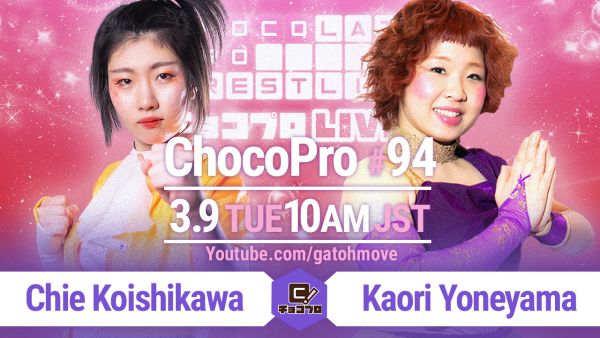 In the main event, “Too Much Energy” Chie Koishikawa will face perhaps the biggest challenge of her young career yet. The ChocoPro episode prior saw Koishikawa earn a much-needed victory, teaming with fellow Gatoh Move fourth generation star Tokiko Kirihara to defeat the team of Sayuri and Chon Shiryu. Recently, Koishikawa has struggled to pick up victories; needless to say, this win will serve as a considerable boost in confidence and momentum alike. Will this momentum come to a screeching halt, however, as she takes on a veteran in the world of Japanese women’s wrestling?

Most joshi puroresu fans will know Kaori Yoneyama better as the clown makeup-wearing Gokigen Death of World Wonder Ring Stardom‘s STARS faction. However, Yoneyama will return to Ichigaya Chocolate Square with a more serious – at least somewhat – approach. Keep in mind that her last ChocoPro appearance took place on episode seventy-six; it was here when she and Emi Sakura, together known as RESET, lost the Asia Dream Tag Team Championship to Best Bros. Since then, Yoneyama has been absent from ChocoPro, working events for the likes of Pro Wrestling WAVE, Diana, and of course, Stardom.

In terms of singles action, Kaori Yoneyama is undefeated in ChocoPro, having picked up wins over Mitsuru Konno, Lulu Pencil, and even both members of Best Bros. However, Chie Koishikawa is determined to emerge as the winner. Since becoming a full-time wrestler last year, Koishikawa has been working hard to improve, not only in terms of her trademark energy but her wrestling game as a whole. Time will tell whether the work she has put in will be enough to take on one of the trickiest, wiliest stars to step foot in Ichigaya Chocolate Square.