After a week break, MLW FUSION returns with not one but two titles on the line. If that weren’t enough to get you excited, Calvin Tankman will be in action against the always exciting Laredo Kid, and “The One Man Demolition Machine” Parrow returns to action. With all of that in-store, we will be focusing on the MLW World Heavyweight Championship match. Let’s dive in!

Contra Unit’s Jacob Fatu will make yet another title defense in his dominant reign, and he’ll face rising star #Injustice’s, Jordan Oliver. Oliver has been one of MLW’s most consistent stars, especially since their return to weekly events. His profile has seen a steady rise after a series of matches with Fatu’s fellow Contra member, Simon Gotch. It would be quite the feel-good story to see the young upstart dethrone MLW’s longest-reigning World Champion.

Unfortunately, I do not see that happening anytime soon. Fatu is on a mission and made it clear in a recent video he plans to teach “the kid” Oliver a lesson in consequences. “The Samoan Werewolf” is also arguably the most dominant champion in MLW history and is easily one of the most vicious competitors in the business today. My bigger concern would be, how is Contra Unit going to factor in this match? They have been trying to assert dominance over MLW with fear and destruction; I fully expect them to make a statement with this match. You better believe this one is a can’t miss for any MLW fan. 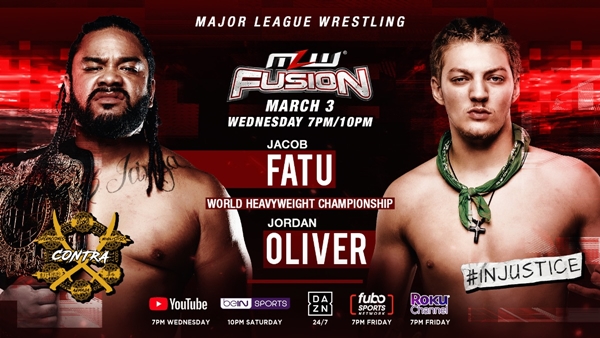