Last Word on Pro Wrestling’s series, War of the Words, explores the art and impact of the promo by looking back through the archives. This series will examine all kinds of promos, from the most memorable or ones that have been overlooked and are underrated, showing the background of the promo, the promo itself, the aftermath of the promo, and what came from it. In this installment, we take a look at John Cena‘s public dismantling of Roman Reigns in the build to their passing of the torch match at No Mercy 2017.

WWE has some of the best storytellers in the history of professional wrestling. And John Cena, for many, is on that list. From his 16 world title reigns to his never-ending ability to drop magic in the promo game, Cena has become an all-time great. And there was always going to be a time where Cena was going to move on and he would need to be replaced as the face of the company. Luckily for WWE, he lasted longer than most as the true franchise. But when Roman Reigns came around, it was only natural that he would be the man to take over down the road. So in this War of the Words, it’s only right we relive the build to the significant match between John Cena and Roman Reigns.

Background: Cena vs. Reigns Set To Be The Official Passing Of The Torch

Passing of the torch. A tale as old as time in professional wrestling. For many years in many companies, especially WWE, there is a passing of the torch moment that allows one man to take over for the next in terms of the face of the company. Rarely, however, do you really get the chance to see those special matches or the new “face” isn’t able to live up to the difficult pressure that comes with being the new top dog. In 2017, WWE was bent on making Roman Reigns go through two legends to establish himself as the one who holds the torch for WWE. When it came to becoming the locker room leader, Reigns defeated the Undertaker at WrestleMania 33. And only a few months later, John Cena was set to be the next one to pass the torch.

A difficult request considering Cena was still on the top of his game, even if he wasn’t able to be in WWE all the time. Unlike the Undertaker at that moment, he could and would run circles around you if given the chance. As these two built for their major match at No Mercy, Cena and Reigns were set for some back and forth. While Reigns was still getting there in terms of promo, “The Franchise” was not just going to hold back to let the kid catch up. And one special night saw Cena inform the world that Reigns cannot fill his shoes no matter the result of their match.

War of the Words: John Cena Makes It Known To The World Roman Reigns Can’t Lace His Shoes, Win Or Lose 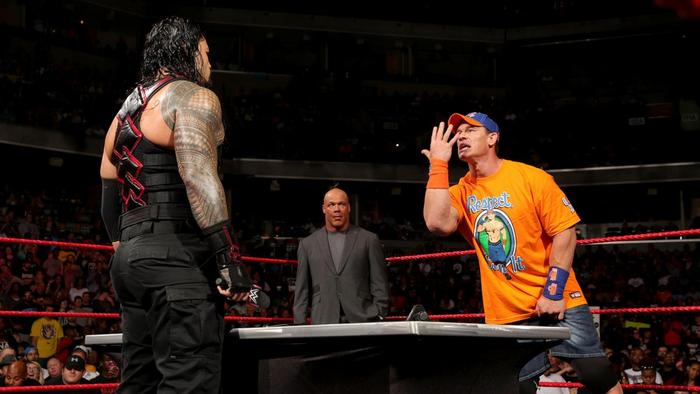 John Cena having an open microphone to take digs at Reigns before even getting to the ring made for a difficult fight on Reigns’ behalf from the jump. It was real. Many questioned if this promo was a “shoot” and it sure felt like it as Cena brought smart terms into the equation.

“Roman Reigns has been the blue-chip prospect that has been protected against anyone and everyone that steps in his path,” Cena said. “And then there’s me. And we’ve been through a whole heck of a lot together and you know me, I know you, and you know I got zero F’s to give and I’m the one dude ain’t no protection from. And that is why I want to fight Roman Reigns because I know that Roman Reigns don’t want to fight me.”

Reigns was done from the start. “The Leader of Cenation” came out guns blazing with no worry in the world that Reigns could get back at him. And what makes it more worrisome is that this was really only the beginning. “The Big Dog” walked down to the ring, gave forth his catchphrases, tried to intimidate Cena, but it was not happening.

“You are the Big Dog,” Cena said. “Everybody back there knows it, everybody out here? Still kinda trying to figure it out. You see Roman, I’m what you would call a polarizing figure. Every week there are people that cheer because they stand for what I believe in. And then there are people that boo because they don’t. And every single week you can audibly hear those people so desperately wanting me to change the content of my character, maybe a little heel turn. But with you it’s different. I don’t know if anyone has ever told you this — They go back and forth with you because when they look at you, they see what I see: A cheap-ass, corporately created John Cena bootleg.”

The crowd erupted into “YES” chants as Reigns simply looked Cena down with nothing to say.

“This chump right here, he ain’t the guy,” Cena continued. “Dude, you’re just a guy. A guy trying so desperately to fill shoes that you never will. Listen carefully young man… I’m not the Undertaker. I’m not a battered veteran at the end of his career with a bad hip. I am the fastest, strongest, and hungriest that I have ever been in my entire life. And the reason you won’t sign that is because you know if you do your Roman Empire… (You can’t see me taunt)”

It was a moment in wrestling where everything felt truly personal. These two weren’t preparing for a match out of respect, no. They were preparing for the match because there was true disdain and doubt from one competitor to the other. Cena doesn’t say things most of the time just because. He says things because he means them. And this was a serious case of him meaning everything that came out of his mouth. Reigns tried to laugh it off but had comebacks that were nothing close to Cena’s words. And then the moment happened when Reigns stopped speaking as it looked like he was trying to find his words.

“It’s called a promo kid and if you want to be ‘The Big Dog’ then you’re gonna have to learn how to do it so go ahead. See ya fourth wall.”

Reigns started to find what he was trying to say, making it very clear that he was in the role that Cena once was. Reigns was the one there every single day while Cena was not and instead going on talk shows and having a grand time in Hollywood. It was almost as though Reigns was trying to dig himself out of the deep hole and brought up the fact Cena was going to bury him much like the other young talent in the past. “The Big Dog” made it clear that this was why he was avoiding him. He could not be buried by Cena. He wanted to be the one and only Roman Reigns, not a new John Cena. And this was where Cena officially shut Reigns down in this War of the Words.

“You done? You done? You see because Roman Reigns is a fool. Roman Reigns is a damn fool. There’s an old saying that its better to keep your mouth shut and have people think you’re stupid than to open it and prove them right. You of all people, you waltz down here and use the same pathetic excuse that every other single person before you has done. You, with all your gifts and all your opportunity, you have the gall to blame me. That’s fine, that’s fine big dog. Congratulations, it took you five years to cut a halfway decent promo but now I’m about to shrink you down to size.

“So everybody back there thinks I have this mystical, golden shovel. That I got these magical powers that I can control everything and keep everybody’s fate. Dude, I can’t tell if you’re blind or stupid. Look and listen: they (the fans) hold the keys. They always have, they always will. But you got to blame me. That’s fine I have been hearing that racket for ten years and I ain’t tired yet. I’m strong enough, I’ve been called a lot worse by a lot tougher. But you actually believe that I’m a shark. That I hold everybody down. That I swim to the top and keep them underwater at any and all costs. I’ma level with you homie, I haven’t main evented WrestleMania in five years. I was the opening match at SummerSlam. I was honored and privileged to earn the United States Title at this stage of my career and use it as a beacon of opportunity to introduce new superstars to the WWE like Kevin Owens and AJ Styles just to name a few. You took the US Title as a demotion. And you stand there and blame me. Fine. I blame you. I’m still here because you can’t do your job. When it comes to this yard, you probably haven’t learned it yet. There’s only one rule: Step up or step aside. And over the years there’s been a few to step up but nobody to ever keep up. And then I finally hear about this one guy. The guy. The Roman Reigns. The one that can keep up. And now I look at you, listen to you. You should be ashamed I’m a part-timer because I can do this part-time better than you can ever do it full time.”

Mic drop. The final promo heard around the world from John Cena that rang more true than ever.

Aftermath: Roman Reigns Defeats John Cena At No Mercy, Solidifying The Official Passing Of The Torch For Years To Come 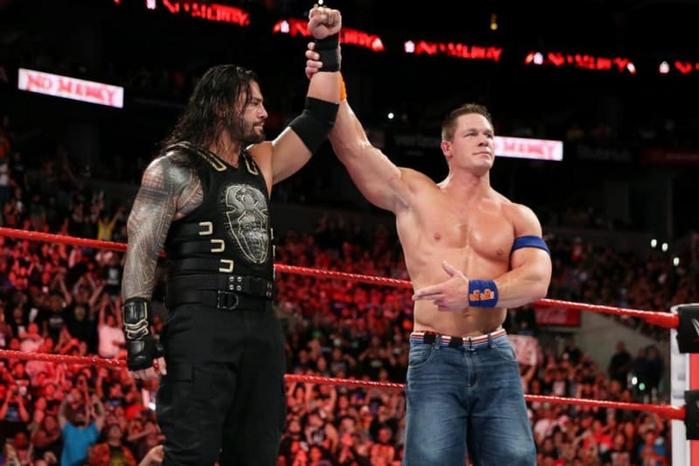 Eventually, these two men did go on to have their match and after more than 20 minutes, it was indeed Roman Reigns who walked out on top and earned the respect of Cena. It was the passing of the torch that WWE wanted, even if Reigns struggled to fully prove it for another few months. As we sit here now in 2021, Reigns is on the top of his game and has become one of the best promos and overall talents in the game. It took three years after this moment for Reigns to fully embrace who he could be as a performer, but many attribute this night that Cena laid into him as the night that helped turn Reigns around as an overall performer.

There is a reason Cena is missed when it comes to WWE. Because as good as Reigns is now, no one can take over in terms of what Cena meant for that company.