When chronicling the most colorful, outspoken characters in professional wrestling, conversation must be made for “The Nature Boy” Ric Flair and “Macho Man” Randy Savage. Between Flair’s elegant robes in tandem with his displays of wealth and Savage’s colorful attires juxtaposed with his raspy promo style, few men in wrestling can boast the personalities they share. They’ve crossed paths multiple times in their career, but for the most part, it’s their work in the World Wrestling Federation that’s remembered. They have also worked in World Championship Wrestling, their steel cage match at WCW SuperBrawl VI being perhaps their most memorable encounter in the organization. 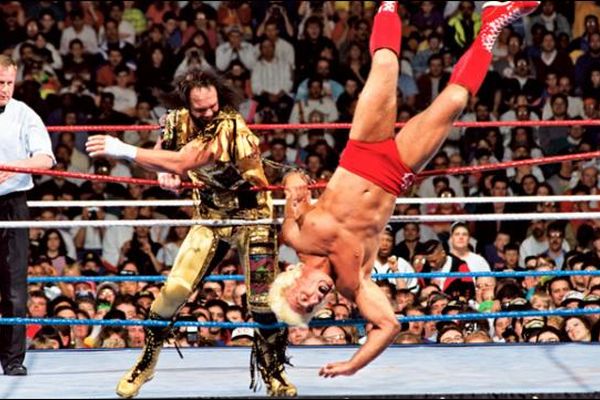 The Lead-Up to WCW SuperBrawl VI

For context as to how this match came to be, one must look back to WCW Starrcade in December of 1995. On this night, Ric Flair defeated Lex Luger and Sting in a three-way match, which earned him an immediate WCW World Heavyweight Championship match against Randy Savage the same night. With help from Arn Anderson, as well as a pair of brass knuckles, Flair pinned Savage for the title. Flair’s latest reign would be short-lived, however, as Savage won back the title the following night on WCW Monday Nitro. To say that these two had a heated feud would be an understatement. As long-time wrestling fans will attest, this wasn’t their first skirmish.

Think back to early 1992, when Ric Flair was the reigning world champion for the World Wrestling Federation. During this period, he sparked a feud with Randy Savage, claiming that he had been with Miss Elizabeth in the past. Flair spoke the infamous words, “Elizabeth was mine before she was yours,” which would help lead to his WWF Championship match against Savage at WrestleMania VIII in April of that year. On that night, the “Macho Man” emerged supreme. The fact that Flair and Savage were brazen personalities in their own respects made their encounters that much more entertaining. However, their upcoming steel cage match at WCW SuperBrawl VI would prove to be their most hard-hitting encounter yet. SuperBrawl VI took place on February 11, 1996 from Bayfront Arena in St. Petersburg, Florida. 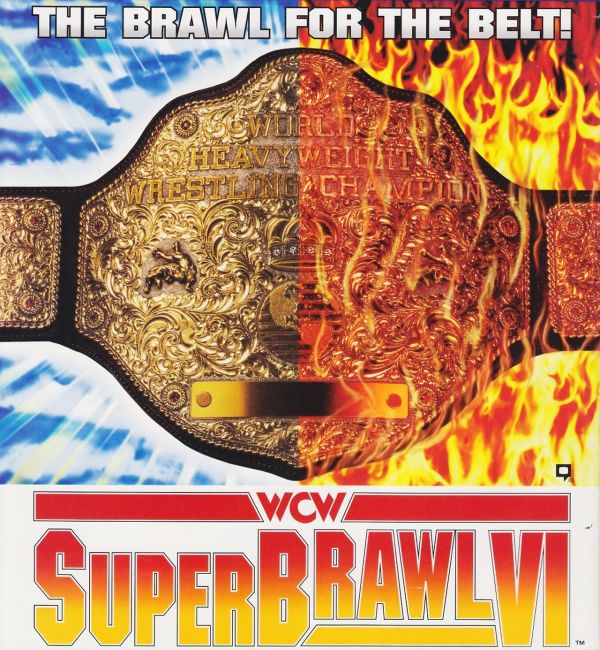 Prior to this WCW World Heavyweight Championship encounter at SuperBrawl VI, “Mean” Gene Okerlund spoke to the participants involved. The first he spoke to was Ric Flair, whose valet at this time was Woman. Her words were simple: “What Woman wants, Woman gets.” Flair’s trademark energy was in full effect, confident that he would best “Macho Man” Randy Savage for the title. He also insinuated that, by the end of the night, he would have Woman on one arm and Miss Elizabeth on the other.

After the steel cage descended from the top of Bayfront Arena, Okerlund spoke to Miss Elizabeth and Savage. Before Elizabeth could barely get three words in, Savage’s undeniable personality took center stage. The WCW World Heavyweight Champion wasn’t short on confidence heading into this match. “Expect the unexpected,” said Savage. “I think it’s going to be complete mental insanity!” His confidence was that much stronger given the reformation of The Mega Powers, as Savage had aligned himself with Hulk Hogan before.

The steel cage match for the WCW World Heavyweight Championship at SuperBrawl VI felt like a grand showdown, complemented by in-ring announcing by Michael Buffer. Flair and Savage made their entrances after. Following Savage’s entrance, Flair remained on the outside, consulting Woman. Savage beckoned him into the cage. Flair, with a mic in hand, had other plans in mind. After all, “The Nature Boy” wasn’t one to let anyone else have the last word.

“Elizabeth, before I got to hurt him real bad,” Flair began. “Send him home in a basket, baby. I’m going to give you one last chance – walk over here and kiss a real man.” Elizabeth was visibly unappreciative of Flair’s advances. Savage confirmed with a raspy declaration of, “Ohh noooo!” Afterward, Flair hesitantly entered the cage, knowing that a game Savage was waiting for him.

The steel cage match began fast, with Savage and Flair trading strikes in the corner. Flair took advantage, slowing down the match as he hit his signature knee drop. It didn’t take long for the cage itself to be used as a weapon; Flair threw Savage into the chain-link steel. “The Nature Boy” even took it upon himself to lay out the WCW official. This would work to Flair’s benefit, as Savage’s backslide attempt wasn’t counted.

Nonetheless, Savage began to mount offense. He even attempted to throw Flair against the cage, but once again, it was the champion that ate the steel. Once again, Flair was in control, using his time-tested chops to keep “Macho Man” on the defensive. Flair made his way to the top, but like it did many times in the past, this failed him. Savage caught him at the pass and applied Flair’s own figure-four leglock on him. All the while, Woman howled from ringside, attempting to rally the challenger.

After failing to pin Flair, Savage made his way to the top of the steel cage. Savage dove from this incredible height, only to be caught on the landing with a strike to the midsection by Flair. “The Nature Boy” followed up with a stalling suplex, though Savage remained in the fight. The WCW World Heavyweight Champion was becoming more fatigued, especially as Flair continued to send him into the steel. Flair would cinch in the figure four leglock, even using the ropes as leverage.

Slowly but surely, however, Savage mounted a comeback, finally sending Flair against the steel for a cage. At this point, both men were becoming physically spent. Flair attempted to escape the cage, only for Savage to halt his progress. Flair’s tactics as “The Dirtiest Player in the Game” came into play, as he hit Savage with a low blow before proceeding to choke him. Flair tried for another escape; once again, Savage cut him off. The WCW World Heavyweight Championship wasn’t about to lose his title easily.

Woman would soon become physically involved in the match, producing a powdery substance. She attempted to throw it into Savage’s face, only for him to duck the maneuver. Meanwhile, in a shocking turn of events, Elizabeth passed her shoe to Flair. This allowed Flair to strike Savage in the head with the foreign object. One pinfall later and Flair would become the new WCW World Heavyweight Champion.

As a gleeful Elizabeth escaped ringside with Woman, an irate Hulk Hogan rushed the ring. Keep in mind that Hogan was set to face The Giant in their own steel cage match in the main event. With a steel chair in hand, Hogan scared off Flair and fellow Horseman Arn Anderson. Hogan attempted to dispute the title change. Despite the nefarious tactics employed, the official’s decision stood. Flair was the new WCW World Heavyweight Champion. 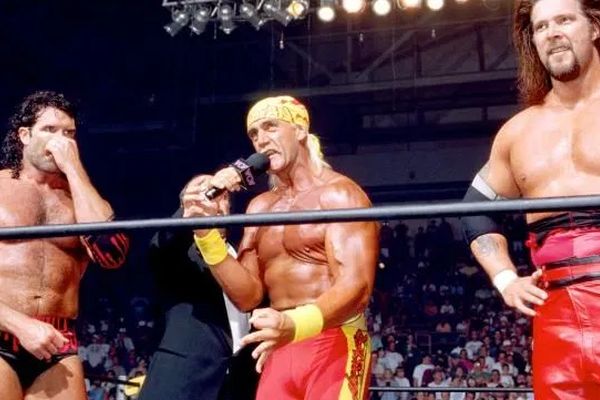 Though Flair winning another world title was big, it would soon be eclipsed by a more pivotal moment in wrestling during the summer. In July of 1996, at WCW Bash at the Beach, renegades Scott Hall and Kevin Nash found a new ally in the form of Hulk Hogan. The once-beloved hero dropped a series of Atomic Legdrops on his long-time friend, Savage, before declaring his allegiance to Hall and Nash. This moment signaled the formation of the New World Order, a game-changer in the world of wrestling.

For a period of time, Savage battled the New World Order alongside other fan favorites including Lex Luger and Sting. Savage left WCW following Halloween Havoc in October due to contract disputes. However, by 1997, Savage returned and went on to join the nWo. The former fan favorite traded his vibrant colors for the signature black and white of the group in question. Furthermore, he would reunite with Miss Elizabeth; this time, they would serve as a heel tandem.

As one of the stalwarts of World Championship Wrestling, Ric Flair never joined the New World Order. Instead, as a result of this storyline, Flair became a babyface, fighting for the honor of the company against the nefarious group. In fact, the nWo was such a dominant faction that Flair, alongside his fellow Horsemen, found himself working with men he had been at odds with in the past. Flair may not have imagined himself working with Sting, for example, but it illustrated just how dominant the nWo had become.

As stated earlier, Ric Flair and Randy Savage are among the most colorful, outspoken personalities in professional wrestling. Thus, when they crossed paths, it was almost as if they were at odds to one-up the other. Who could be louder? Who would be the more boisterous of the two? Which one could better capture an audience’s attention? Regardless, they knew how to make magic together. Their steel cage encounter at WCW SuperBrawl VI is one for the record books.