On February 11th, TJPW will run their first big show of the month at Korakuen Hall in Tokyo, Japan. TJPW Positive Chain will be streaming live on WRESTLE UNIVERSE. Here is what viewers should expect.

The Positive Chain opener features four of the young, lesser experienced women in the company. All of them, though, have been given big opportunities recently on TJPW’s last PPV show. Additionally, Marika Kobashi received the opportunity to be featured on DDT. This will be a typical TJPW light opener that gives the fans a chance to get to know the silly characters the company has to offer but won’t be one to skip.

Yuna Manase once again returns to TJPW in this six-woman tag match at Positive Chain. Yuna has been playing the veteran role really well in the company in the sporadic appearances since leaving and is always a delight to see back in the ring for them. She has some good partners, fighting alongside Raku who had a great showing at the 1.30 PPV, and Noa Kakuta, who has been on the winning side of the majority of her matches since joining TJPW in November. Hikari Noa and Sena Shiori will team up once again; the real-life best friends have great team chemistry together which is always exciting to watch. Recently, Mahiro Kiryu had an opportunity at the tag titles which puts her in good spirits. This will be a typical six-woman tag where anyone could win.

Yuka Sakazaki and Mizuki vs. Suzume and Arisu Endo

The Magical Sugar Rabbits take on the rookies once again in what should be a great match up. Arisu and Suzume have been impressive this year. Suzume was Arisu’s first-ever match back in January and they picked up a victory together in a six-woman tag match alongside Yuki Kamifuku. Yuka was recently announced as one of the participants in AEW’s women’s tournament; with all of this added attention, she will be looking to impress international audiences. Mizuki has been doing great in tag action with Yuka and has been featured in DDT recently. It’s expected that the veteran team will be taking the win in this one. 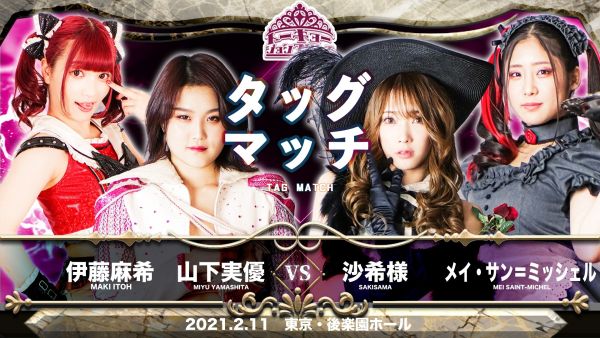 Miyu Yamashita and Maki Itoh vs. Sakisama and Mei Saint-Michel

After gaining her respect at the January 4th Show, Maki Itoh has been teaming up with Miyu Yamashita and the odd pairing has actually been making the team function really well. With the upcoming tag tournament, it is likely that we will see these two pairing up more frequently. The newest recruit to NEO Biishiki Gun, Mei Saint-Michel, has been picking up a handful of victories since debuting in early December. With Sakisama’s eyes set on a bigger prize, these two will want to continue the momentum they’ve picked up for themselves. 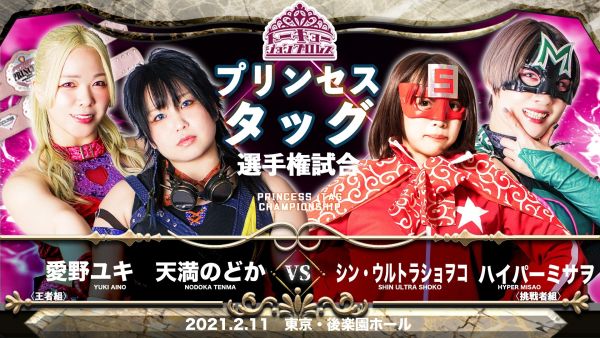 The first title match of the night is the BAKURETSU Sisters’ second defense. They have won two of their three matches this year including their first successful defense against Yuki Kamifuku and Mahiro Kiryu. This defense is no easy task, though, as the superhero team of Shin Ultra Shoko and Hyper Misao are as unpredictable as they come in TJPW. They already have a good number of wins as a team this year, which plays well into their favor, but can they get it done against the champions or will they have to earn another shot during the tag tournament?

Yuki Kamifuku is proving herself as a champion for the second time against Mirai Maiumi. After defeating Hikari Noa in the International Princess Tournament back in November, and having a successful defense against Mahiro Kiryu, who she teamed with in a failed attempt to win the tag titles, she has an opportunity to defend her title against Maiumi.

The latter has been getting better and better with every match. Maiumi has already got a few wins in tag action against Kamiyu and might possibly be her strongest opponent yet after going toe to toe with joshi legend Aja Kong and holding her own. Kamiyu recently announced that she has officially retired her Old McDonald theme and will be debuting a new song, much to the disappointment of fans. It will be interesting to see what she comes out to. It is difficult to place a winner on this but if Kamiyu comes out the victor, she could have quite a lengthy reign as champion. 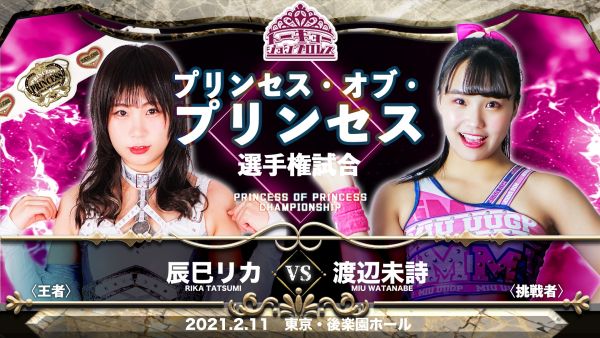 In another first-time defense, Rika Tatsumi takes on Up Up Girls‘ Miu Watanabe at Positive Chain. It’s important to note they were recently tag team champions. After what people touted as a match of the year for the company back in January, when Rika won the title from Yuka Sakazaki, she has big expectations to live up to in her first defense. This will be an uphill battle as Rika takes against Miu, who has been quietly rising up through the ranks and getting into great shape. It will be an interesting match-up since they are incredibly familiar with one another given their recent history; this could create some incredible moments. This is shaping up to be a great main event with an excellent story behind. There’s hope Rika will pull off the win.