If you were wishing for more incredible women’s wrestling to enjoy, then Mission Pro Wrestling is here with your Wishes Granted! There are several debuts in-store, such as Skye Blue, Masha Slamovitch, and Black Widow. Shaul Guerrero will also be making her in-ring debut for MPW. La Rosa Negra will defend her championship against Miss Reality, Madi Wrenkowski. Thunder Rosa and Allysin Kay will face off for a third time, in a cage in the hopes to settle their rivalry. There is limited fan attendance due to social distancing requirements, so if you are unable to attend in person, it will stream live on the Title Match Wrestling Network.

This Friday, February 6th, my return to @MissionProWres will be 3 words: Fab-u-lous. Smooches, @KenziePaige_1.💋

As noted earlier, both Masha Slamovitch and Black Widow are making their MPW debuts at Wishes Granted. Slamovitch has just returned from an extended excursion in Japan. She spent the better part of a year working on her craft in the joshi scene, working for Marvelous, Pro Wrestling WAVE, and Sendai Girls. Now that the Russian Dynamite is back on US soil, in Texas she looks to make an explosive impact. Promise Braxton is your current reigning and defending Reality of Wrestling Diamonds Division champion. She defeated both Hyan and Rok-C in December on The Diamonds Division episode of ROW. Braxton is a diamond in the rough herself, just starting to break out and shine. Black Widow is from El Paso, TX, and has been in wrestling for about six years. She’s the wildcard in this match, as not much is known about this luchadora yet. However, like her arachnid namesake, she will be poised to strike at Wishes Granted.

No cuts. No fancy edits. Just an AK with something to say.

In a grudge match over a year in the making, the only thing that could hold both Allysin Kay and Thunder Rosa is a cage. First, Rosa took the NWA World Women’s Championship away from the AK47 at NWA Hard Times. Rosa then retained the title in the rematch on an episode of NWA Powerrr. The tension between these two warriors has been building in the months since. Inside the cold and unyielding steel at Wishes Granted, perhaps the only wish that will be granted is the promise of suffering. 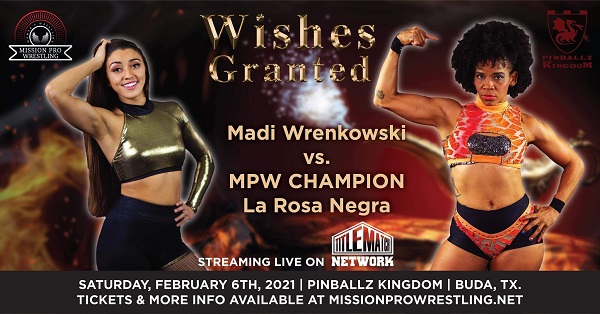 In her road to becoming the first MPW Champion, La Rosa Negra defeated Miss Reality, Madi Wrenkowski in the tournament semi-finals. Since then, Wrenkowski has been on the upswing, successfully defending her PPW Women’s Championship at Run It Back and appearing on AEW DARK three times. Comparing their careers, perhaps the only metric Wrenkowski outweighs the veteran champion is attitude. La Abusadora is not worried by the latest young upstart threatening her throne. Only one of them will walk out MPW Champion after Wishes Granted. 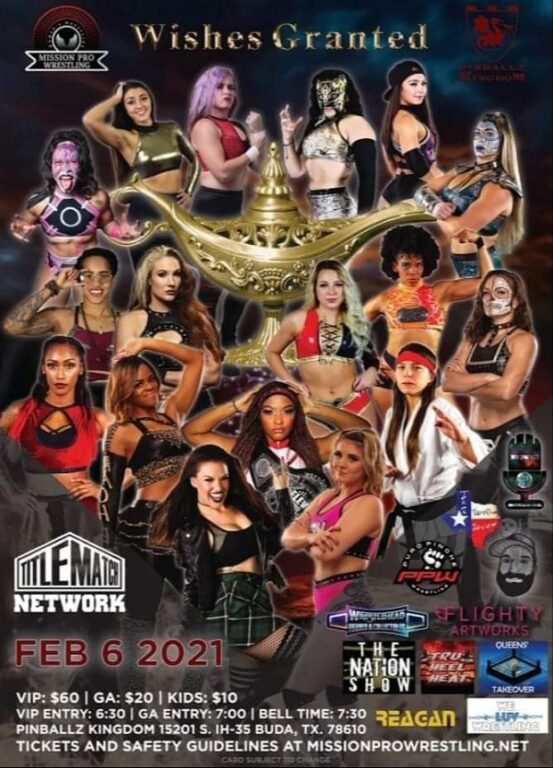 Wishes Granted will be live on Saturday, February 6th with a bell time of 7:30 PM Eastern Time. It will be available streaming and later on-demand from the Title Match Wrestling Network.

Stay tuned to Last Word on Pro Wrestling for more on this and other stories from around the world of wrestling, as they develop. You can always count on LWOPW to be on top of the major news in the wrestling world, as well as to provide you with analysis, previews, videos, interviews, and editorials on the wrestling world. Looking to talk wrestling, pro football, or any number of sports? Head on over to the LWOS Boards to engage in conversation with fellow fans!