Tokyo Joshi Pro Wrestling will holding their second PPV – TJPW PPV Show 2 ～Starting Point～ –  on OPENREC.tv on Jan 30th in Akihabara, Japan.  Currently, the first-ever TJPW PPV on OPENREC.tv is available for free until the PPV airs. For those that want to watch, Miyu Yamashita made her debut. ～Starting Point～ will take place in the same venue in Akihabara where the first-ever TJPW show took place eight years ago. Since the venue is so small and there are rules with capacity during the pandemic, there won’t be any fans at the event. Instead of the usual ring, matches will be done on a mat, similar to the matches fans of ChocoPro are used to. The PPV will also feature musical performances by Up Up Girls (Puroresu), Maki Itoh and Rika Tatsumi. 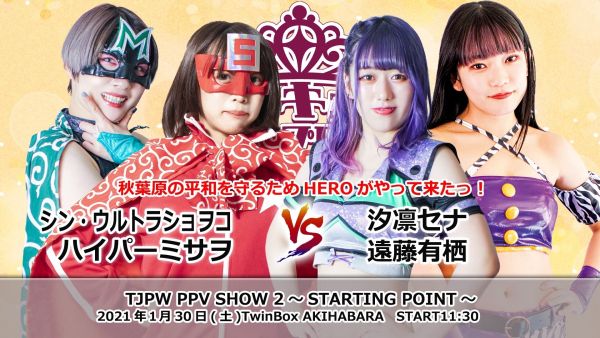 The dynamic superhero duo team up once again in the TJPW PPV Show 2 ～Starting Point～ opener. This won’t be an opener to miss, though; with the lack of ring, it means even more chaos for Hyper Misao to tap into. It’s likely that a bike and maybe some kaiju toys will be brought out for some added support as well. Rookie Arisu Endo has been doing great so far and having no ring to work in will be a true test of her skills. It’s quite clear to pin the winners for this one down as Shin Ultra Shoko and Hyper Misao. 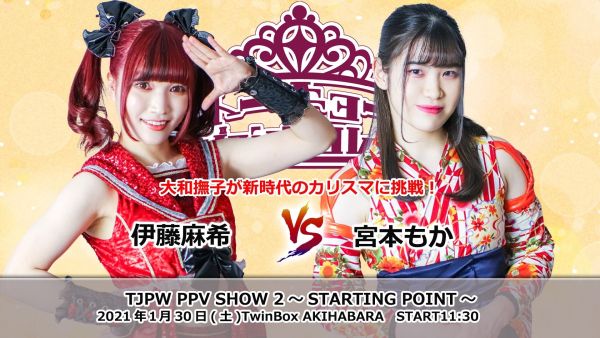 Maki Itoh will be pulling double duty with her musical performance as well as her match at TJPW PPV Show 2 ～Starting Point～. This is the first of two singles matches on the card so all eyes will be on them. Maki has proven to excel well when it comes to unusual out of the ring match types evident in what she’s done for DDT. With Miyamoto still being quite fresh, it will be interesting to see what she can bring in this environment. This is the first-ever singles match between them, but there’s a good chance Maki will walk out of this with a victory. 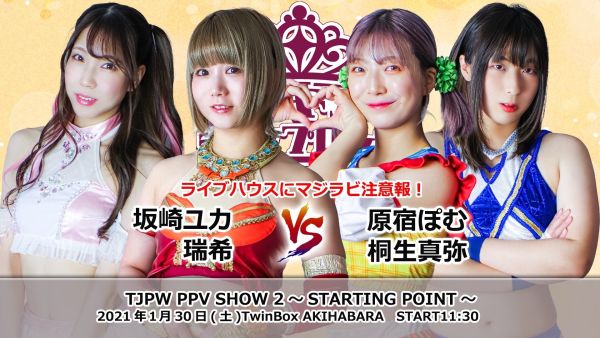 Yuka Sakazaki and Mizuki vs. Pom Harajuku and Mahiro Kiryu

The Magical Sugar Rabbits take on Pom Harajuku and Mahiro Kiryu. Both of these teams have been having fun and exciting matches, whether in singles or tag competition. This is another match on the card that represents the past and future of the company as a whole. There’s definitely a chance for Pom Harajuku to shine during this show. After all, the lack of a ring could be a great way to show off her clown gimmick. This could be one of the most exciting matches on the card with all the potential for chaos and fun. The veteran team of Yuka and Mizuki could easily get the win. 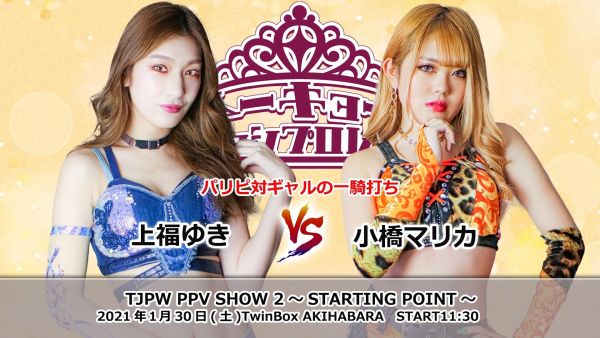 Marika Kobashi gets a singles match against the current International Princess Champion Yuki Kamifuku which in itself is quite a big deal let alone with this being one of two singles matches on the PPV. Both women in this have the opportunity to shine in this one in comparison to the tags that they have been featured in recently. Although this isn’t a title match, Marika will be looking to impress and take down the champion. This one is hard to call but Kamiyu will want to continue her strong run going into her title defense in February. 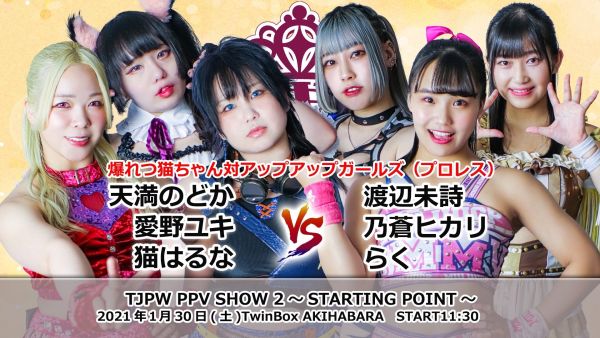 The Up Up Girls will be taking on the familiar team of the BAKURETSU Sisters with Haruna Neko. At the 1.16 show, Neko teamed with the BAKURETSU Sisters and picked up a victory that might give them a little edge. Since UUG have yet to get a win as a unit this year, they will want to get back to winning ways, especially with Miu’s big match coming up at Positive Chain. With so many competitors in this match, in such a small space, who knows what will happen?

Rika Tatsumi and Suzume vs. Miyu Yamashita and Mirai Maiumi

Miyu Yamashita was in the first ever TJPW show. Eight years later, she teams with one of the bright young stars of the company, Mirai Maiumi. While this is quite the pairing, both have been excelling as of late and are going to be one tough force to go up against. The Princess of Princess Champion Rika Tatsumi is another name that has been in the company since the early days and she teams with another young star Suzume. This is truly a battle of the past, present, and future of the company and is a great showing of how far the company has come since Miyu made her debut on the first TJPW show. This match is gearing up to be the best of the night. With all of this incredible talent, it is too close to call.