This weekend Ohio Wrestling Alliance runs one of the best looking indie shows of the year so far with Good Trouble.  Jonathan Gresham, Trish Adora, Myron Reed, and Lee Moriarty are just some of the names set to be featured on this show.  Let’s run down the action!

In one of the most high-profile matches on the night the Pure Wrestling Champion Jonathan Gresham takes on the high-flying Myron Reed.  Reed’s greatest success has come from his high flying abilities but against Gresham, he is likely to be grounded and left relying on his pure wrestling skills.  The old saying is styles make fights and that’s exactly what we have here as the USA’s best technical wrestler takes on one of its best high flyers.

Poor Lee Moriarty has his work cut out for him as he takes on the Big Bad Kaiju O’Shay Edwards.  Moriarty emerged as one of the top indie stars of 2020 after a breakout performance for Game Changer Wrestling and his performances have warranted this as he has consistently put on great matches.  Moriarty is a skilled, fast competitor and he will need to use these talents if he wants to emerge victorious here.

Biggest Match Of His Career 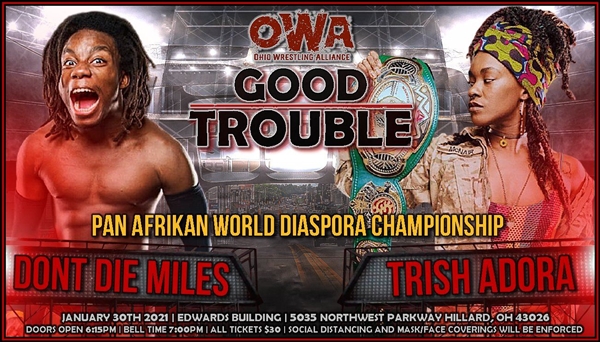 Don’t Die Miles has the biggest match of his young career as he challenges for the Pan Afrikan World Diaspora Championship.  The title is currently held by Trish Adora who has fended off challengers of any gender to hold on to the title.  Her lariat Tubman has put down bigger and better competitors than Miles, but Miles hasn’t become one of the top prospects on the indies for no reason.  He has earned the moniker Don’t Die Miles and he will no doubt give his all against Adora to win the prestigious championship.

Where To Watch Good Trouble

The event will premiere on IWTV on February 11th at 8 pm EST.  Use the promo code OWA when signing up!