AEW’s Women’s World Championship Eliminator Tournament is set to crown a number one contender for Hikaru Shida.  The picture used for the graphic has led to speculation that we will see a number of Japanese women compete in the tournament, possibly in matches taped in Japan.  We decided to take a look at some women we could see take part in the AEW Women’s tournament. 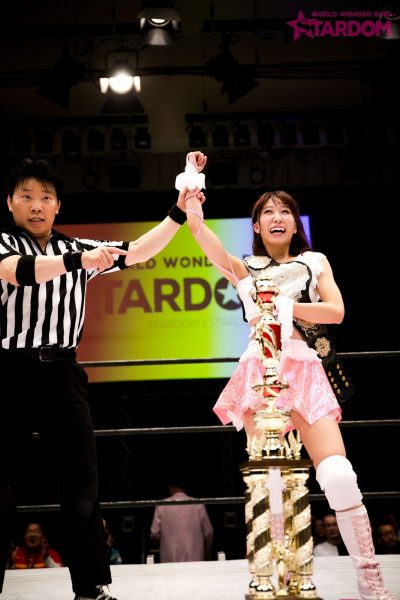 With rumors that she has finished up with Stardom and could be heading back to the USA soon this tournament could mark the return of Riho.  The first-ever AEW Women’s World Champion has not competed in AEW since March of 2020 due to the pandemic but her in-ring abilities and veteran presence have been missed.  Riho winning the tournament and setting up a rematch with Hikaru Shida at Revolution would be one of the best matches this division can do in terms of in-ring ability.

Ryo Mizunami took part in the first Joshi match in AEW at Double Or Nothing.  Mizunami has not yet returned to AEW but she is now a free agent and would be free to compete in an AEW tournament.  Her infectious personality and hard-hitting strikes would make for a popular addition to the tournament.

The AYAYAYAYAYAYAYAYAY girl Yuka Sakazaki won over a lot of fans during her initial matches in AEW.  Her high flying style and adorable personality instantly made her a fan favorite.  Due to her commitments to Tokyo Joshi Pro Wrestling she was not able to follow up on that AEW success but she has dropped the Princess Of Princess Championships and would be a good candidate to have in this tournament.

If not for COVID-19 there’s no doubt we would have seen Miyu Yamashita in AEW by now.  The ruthless striker has been one fo TJPW’s top performers for some time now and definitely impressed Kenny omega at Ultimate Party when she fought Omega and Riho in mixed tag action.  Yamashita would be a fresh addition to the tournament and would take part in some of the best women’s matches in AEW.

Time for Emi Sakura to have another Title Match, #AEW Women’s Champions is coming to home with me this time. #chocopro https://t.co/ofRvNL2CiD

Based on her tweet it would seem Emi Sakura is aiming to win this tournament and earn another shot at the AEW World Women’s Championship.  Much like Riho, Sakura has not been in AEW in some time due to the pandemic but if there is a way for some Japanese talent to take part in this tournament they’d be silly not to go with a veteran like Sakura.  If this side of the bracket is indeed being taped in Japan then some of Sakura’s Gatoh Move students like Mei Suruga and Yuna Mizumori could also take part.

Last time AEW ran a tournament they called upon Nicole Savoy to team up with Big Swole.  While the Swole family did not get the win in that tournament Savoy more than earned a callback.  While AEW has been loading up on women’s talent none are more ready for the big stage than Savoy who has long been one of the best unsigned wrestlers in the US.

With the AEW/IMPACT partnership alive and well we might see some of IMPACT’s Knockouts take part in the tournament.  Deonna Purrazzo will likely be protected but IMPACT could definitely send former champion Jordynne Grace to take part.  Known for her power-based movset Grace would have a fun time with a new set of opponents, and could even have a great hoss fight with Nyla Rose