Twenty years ago today, the World Wrestling Federation held its fourteenth annual Royal Rumble event. To say that there was excitement heading in would be an understatement. Given the Royal Rumble‘s reputation, even during this period in the company that would later be known as WWE, this should come as no surprise. The 2001 Royal Rumble main event was accompanied by other matches that made the overall show worth watching for any fan.

For starters, Chris Jericho won his fourth Intercontinental Championship; the current “Demo God” of AEW would go on to hold said championship on a record-setting nine occasions. Additionally, Kurt Angle successfully retained his WWF Championship against Triple H in a match stoked with mutual animosity. These were just a few contests that led to the eventual Royal Rumble match. Depending on who’s asked, this may be the best Rumble in its extensive history. Here are a few of the landmark moments of the 2001 Royal Rumble match. 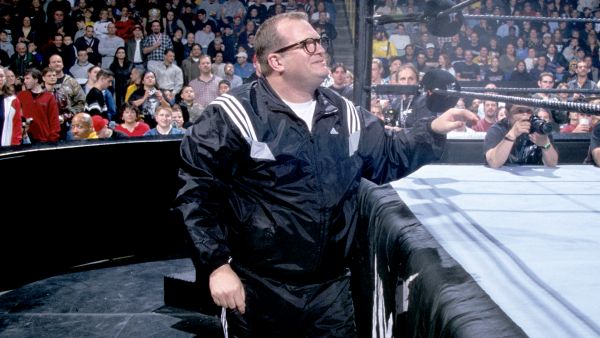 The Royal Rumble match is open to all competitors, some more surprising than others. From established wrestlers such as All Japan Pro Wrestling legend Genichiro Tenryu to long-time WWE announcer Michael Cole, the Royal Rumble has had its share of eclectic entrants. When it comes to celebrity entrants, one name immediately springs to mind. He was the host of Whose Line is it Anyway for almost ten years, not to mention the star of The Drew Carey Show. On that night, however, he simply wished to plug his Improv All-Stars show. Little did the comedic, well-meaning Drew Carey realize that he was in for a horrifying, potentially dangerous night.

Prior to the 2001 Royal Rumble match, Carey approached Vince McMahon for advice on how to promote his comedy show. During this, Carey struck up a conversation with Trish Stratus, who was romantically linked to McMahon during this period. Misunderstanding the situation, a spiteful McMahon decided to enter Carey into the Royal Rumble match. Carey regarded this as a fun opportunity, even when he came face-to-face with the intimidating Kane backstage. The danger of the Royal Rumble match didn’t even set in for Carey once he entered at number four.

As the Whose Line host entered the ring, The Hardy Boyz inadvertently eliminated each other. Carey stood in the ring, soaking in the response from the New Orleans crowd. Once the buzzer sounded, and the familiar flames arose from the stage, Carey’s demeanor shifted from adulation to fear. Kane approached the ring, once again summoning fire as he was known to do. Carey attempted to save his skin, even offering the masked powerhouse money as a peace offering. Kane wasn’t interested in collecting capital, but rather, causing carnage.

Kane wrapped his hand around the throat of Carey, readying the Improv All-Stars promoter for his patented chokeslam. Before Kane could execute the move, he was struck from behind with a kendo stick by Raven, the reigning Hardcore Champion at the time. With Kane’s attention diverted, Carey quickly escaped, eliminating himself. While Carey may not have gone on to main event WrestleMania X-Seven, he left with his life; a worthwhile commodity all its own. It wouldn’t be all bad for Drew Carey, though, as he would enter the WWE Hall of Fame, largely due to this performance, a decade later. 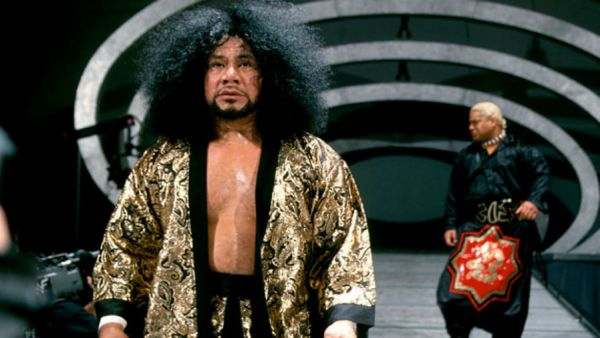 Another staple of the Royal Rumble is the cavalcade of returning stars from the past. Whether they’ve been away due to injury or have worked for other organizations, when these familiar faces return, reactions are all but guaranteed. For proof, one needn’t look far. In last year’s Royal Rumble, Edge made his WWE return, having been inactive for nearly a decade due to neck concerns. In 2016, AJ Styles confirmed all rumors, at the time, when he appeared in that year’s Royal Rumble. Wrestling fans love a good surprise, for which the Royal Rumble is the perfect catalyst.

In the 2001 Royal Rumble match, fans saw a unique return in the form of Haku. From the late 80s to the early 90s, he was a regular competitor for the World Wrestling Federation. In addition to being one half of The Islanders, alongside Tama aka The Tonga Kid, he became “King Haku” with the blessing of Harley Race, and even held the Tag Team Championship alongside Andre the Giant for a spell. Haku would leave the company in early 1992. Roughly nine years later, Haku returned in the 2001 Royal Rumble match.

Granted, Haku’s second stint with the World Wrestling Federation was brief. He would depart in early 2002 and did little of note aside from creating a brief team with Rikishi. However, Haku’s return was unexpected. At this point, he had become a recognizable star in not just the Federation, but WCW, Super World of Sports and elsewhere. Additionally, Haku’s reputation as one of the toughest men in wrestling became the stuff of legend in recent years. His legacy in wrestling lives on, too; his three sons compete in New Japan Pro Wrestling. Hikuleo, one of Haku’s sons, regularly appears on NJPW STRONG. Meanwhile, Tama Tonga and Tanga Loa, the Guerrillas of Destiny, are the IWGP Tag Team Champions currently in their seventh reign. 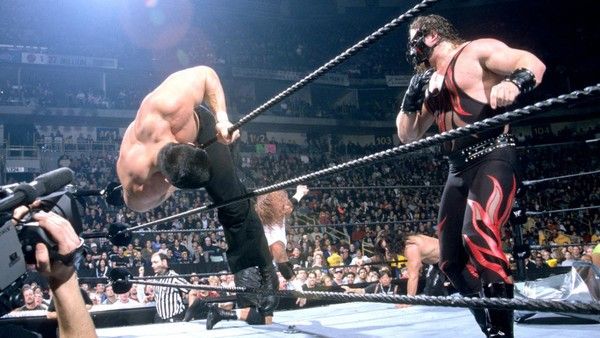 Kane Sets a Record in the 2001 Royal Rumble

Kane’s work in the 2001 Royal Rumble match didn’t end with instilling fear in Drew Carey. At this point, “The Big Red Machine” was one of the most feared, dominant competitors in the World Wrestling Federation. As stated earlier, he entered this match with the goal of causing carnage. Not only did he succeed in his venture, but he managed to do so while setting a record in the process. It was a record so great, in fact, that it wouldn’t be broken for well over a decade.

Kane’s show of dominance began with Grand Master Sexay, who entered the match at number eleven. From there, Kane did away with Steve Blackman, Al Snow, Raven, and others. Throughout the match, other stars such as Tazz, Crash Holly, and Albert fell to “The Big Red Machine.” It seemed like Kane was a force of nature, unable to be moved by mere human forces. If there was any one match where he truly looked like the monster the company hyped him as, it would be the 2001 Royal Rumble. In fact, it took a steel chair and sheer grit from the eventual winner to ultimately topple the masked monster.

In the 2001 Royal Rumble match, Kane lasted for a total of 53 minutes and 46 seconds; this was the longest stretch of any competitor that year by far. His record, however, came in the form of eliminations. Kane ended up eliminating a total of 11 competitors in a single Rumble, breaking the previous record of 10 matched by Hulk Hogan and “Stone Cold” Steve Austin. Kane would hold this record until 2014, when Roman Reigns scored 12 eliminations in that year’s match. As the years progressed, Kane would end up amassing the greatest total eliminations in cumulative Rumble matches at 43. This particular record has yet to be broken or even matched.

Kane’s career can best be described as unique. He has portrayed everything from a vicious, unfeeling monster to a comedic presence that effortlessly made others laugh. Regardless, he has consistently been portrayed as a threat come the Royal Rumble. The records discussed here are a collective reason why. 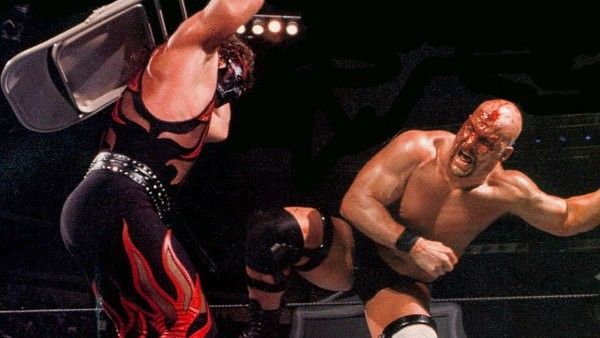 The Rattlesnake Strikes for a Third Time

The adage is that good, great, or wonderful things “come in threes.” In professional wrestling, if there’s one area where this rings truest, it would be the Royal Rumble. Winning the Royal Rumble match is an accomplishment, to say the least, even if one were to emerge victorious once. Throughout the years, a select few have emerged successful numerous times. While names including Hogan, Shawn Michaels, Triple H, and John Cena have two Rumble wins each, only one has claimed the three-peat: “Stone Cold” Steve Austin.

In the months leading to the 2001 Royal Rumble, Austin had been on a tear. Keep in mind that, from November of 1999 to mid-to-late 2000, “The Texas Rattlesnake” was absent after undergoing neck surgery. In storyline, Austin had been run down by an unknown assailant; after an extensive investigation by Mick Foley, who served as the company’s commissioner, it was revealed the Rikishi carried out the hit. From there, Austin exacted revenge on not just Rikishi but the mastermind behind said hit: Triple H. Along the way, Austin made history in his own right.

Austin entered the 2001 Royal Rumble at the lucky number of 27. Earlier in the night, Austin cost Triple H his title match against Angle. As Austin made his way down the aisle, he was attacked by a vindictive Triple H, who beat the “Rattlesnake” to a bloody pulp. From there, it looked like Austin’s chances of a Royal Rumble victory were dashed. However, through sheer determination, Austin made it back into the ring. He took Haku and Billy Gunn out of the match and, by the end, he was left standing with the dominant Kane. It took Austin a Stone Cold Stunner, as well as three chair shots and a defiant clothesline, to finally eliminate Kane. Crimson mask and all, Austin punched his ticket to the main event of WrestleMania X-Seven.

From 1997 to 1998 to 2001, Steve Austin remains the only man to win the Royal Rumble match three times. For more statistics, over the 6 Rumble matches he participated in, Austin eliminated a total of 36 competitors; the only three competitors that surpassed him, in this respect, have been Kane, Michaels, and The Undertaker. Will another competitor make it to the exclusive club of multi-time Royal Rumble winners this year? Until then, Austin remains in a class all his own.