William Regal is considered one of the best technical magicians the wrestling business has ever seen. Influential to many, he had an illustrious career filled with masterpieces only a maestro of his craft could cultivate. Systematically dissecting opponents throughout his illustrious decades-long career, Regal is a pioneer. A trailblazer in many respects, Regal would even innovate wrestling maneuvers such as the “Regal-Plex” and his devastating hold known as the “Regal Stretch”. He paved the way and inspired many technically-gifted athletes the likes of Daniel Bryan, Cesaro, and other countless performers. A British wrestling Icon, William Regal kicked the doors down for many UK-born wrestlers like Pete Dunne, Zack Sabre Jr., Wade Barrett, and many other British-born stars.  The Blackpool bruiser scratched and clawed his way to carve out an everlasting legacy many would only dream to have.

William Regal began his wrestling journey in England. An aspiring wrestler filled with big dreams of showcasing his skills on the largest stage possible. At age 15 he started his wrestling career regularly competing in carnivals and various small events in the UK wrestling scene all throughout the ’80s. His name started picking up steam because of his “catch style” British wrestling style which mixed submission holds and transition moves to get the upper-hand on one’s opponent. The style would be instrumental not only in professional wrestling as a whole but in the world of mixed martial arts. Regal also regularly teamed with his good friend, current trainer & producer for NXT, Robbie Brookside.

Regal then ventured onto bigger things when he decided to move to the United States. In 1992, World Championship Wrestling hired him and he spent most of his time as a mainstay in the WCW World Television Championship division. He defeated Ricky “The Dragon” Steamboat to win his first World TV Title, defending the gold against legends the likes of Ric Flair, Antonio Inoki, among many others. He won the World Television Championship three more times in his stay with the promotion. Regal was also instrumental in the early career of a young up and comer then known as “Jean-Paul Lévesque,” who fans would eventually know best as Triple H. They teamed up for a short period in an early incarnation of “The Blue Bloods”.

He spent his remaining time in the company battling the likes of Fit Finlay, “Hacksaw” Jim Duggan, and many more that stood in his way. In an infamous match, before he ended his first run with WCW, Regal battled a green youngster by the name of Bill Goldberg and would show everyone his supreme wrestling ability by educating the new star in the art of professional wrestling. He made a second and final return to the promotion in 1999. 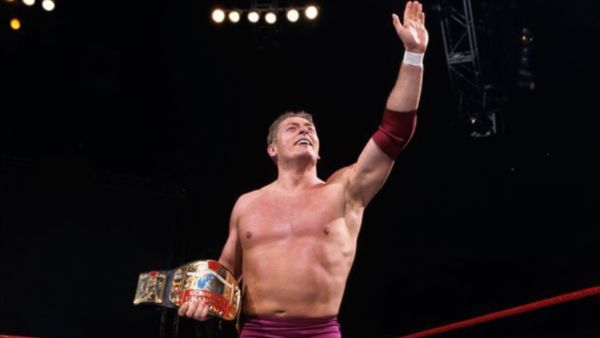 A Royal Time in WWE for William Regal

Regal made a career-changing move when he decided to join World Wrestling Entertainment in 2000. During this time, Regal showed his range by serving as the on-screen Commissioner for WWE. This endeared him to fans because of his comedic timing and a memorable segment with Chris Jericho. In the company, he won multiples singles championships such as the Intercontinental, European, and Hardcore Titles. Along with these solo accolades was a myriad of World Tag Team Championships runs with the likes of Tajiri, Lance Storm, and Eugene.

The late 2000s was a pivotal time for William Regal. Some would consider this the best run of his career. He showed a darker and more brutal persona in this stretch. William won the King of the Ring tournament while also assuming the General Manager role for RAW. Fans saw a tyrannical side of him with vicious assaults and contests with the likes of CM Punk. Regal was threading towards a main event run because of his outstanding portrayal as the King of RAW. He also reclaimed the Intercontinental Championship at the time. Reports years later stated that he really impressed management. In fact, they were considering pulling the trigger on a world title reign for him. However, out-of-ring issues would ultimately prevent that from ever materializing.

He soon found himself in WWE’s version of ECW, flirting with the opportunity to be ECW World Champion facing off against Christian. Regal also led a heel stable known as the “The Ruthless Roundtable” with Vladimir Kozlov and Ezekiel Jackson. Unfortunately, he never won ECW’s top prize. Shortly soon after, WWE’s revival of the promotion soon vanished, leaving Regal without a world title reign. He soon ended his in-ring career. Regal now serves as trainer and producer as well as the on-screen General Manager for NXT.

William Regal will forever be remembered as a legendary technician in between the ropes. He inspired so many to learn the craft and perfect it, mixing the artistry of technical wrestling and brawling no-nonsense style wrestlers followed closely. Never jaded, Regal continued his contribution to the industry by scouting talent. In fact, his current role with WWE is proof of how he has a magnificent eye for spotting stars. His love of professional wrestling extends outside of the ring as he molds the next generation of superstars in NXT.

Triple H, Robbie Brookside, Finlay, and various superstars sang the praises of the British star in an interview with WWE.com. They referred to Regal as a gentleman who gave more than he took from the business and a willing performer that evolved with the times. Even in the twilight of his career as a grizzled veteran, he showed he can still do it. This is evidenced by his bouts with protégé Daniel Bryan on an episode of WWE Superstars and a hard-hitting affair with Cesaro in NXT. His match with Cesaro would turn out to be the last of his outstanding career.

Regal made the most out of everything given to him. He worked hard and gave everything he had to this business. Regal holds a place in the hearts of his fans and peers alike. His work ethic and great wrestling prowess were second to none. With countless achievements and an impact that will be felt for many years to come, Wiliam Regal’s career was simply excellent. His eventual induction into the WWE Hall of Fame will immortalize the life’s work of A Real Wrestler’s Wrestler.