On October 24, 2020, at IMPACT Bound for Glory, Madison Rayne revealed the return of the IMPACT Knockouts Tag Team Championships (something we here at Last Word on Pro Wrestling anticipated back in June). In November, a tournament began to crown the brand new IMPACT Knockouts Tag Team Champions, featuring IMPACT tandems and some top names from the US indies. This coming Sunday, at IMPACT Hard To Kill, the finals between Tasha Steelz & Keira Hogan vs. Jessicka Havok & Nevaeh will take place, with the 10th holders of the titles being established to carry on the lineage of the titles.

The titles – originally started as the TNA Knockouts Tag Team Championships – were launched in 2009 until they were finally deactivated in 2013. In total, nine different teams held the titles over the years, and now a new generation of Knockouts will carry on the tradition of having tag team titles to chase in IMPACT’s deep Knockouts division. Here’s a look at the nine teams that have previously held the IMPACT Knockouts Tag Team titles in the company’s history. 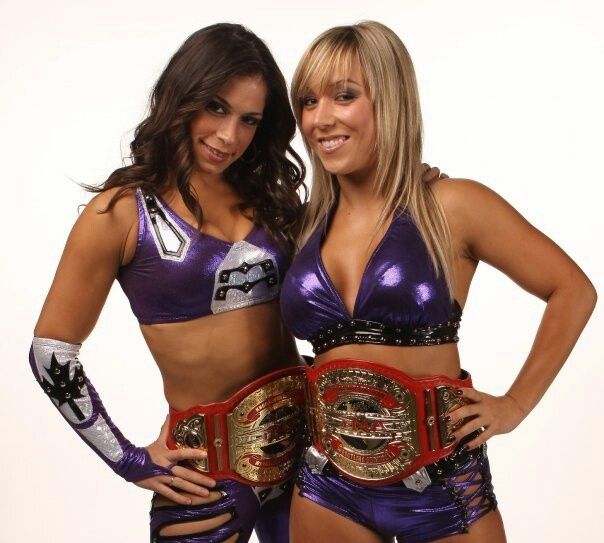 In the end, the finals at TNA No Surrender on September 20, 2009, came down to the teams of Taylor Wilde & Sarita (Sarah Stock) facing The Beautiful People (Angelina Love & Velvet Sky), with the Canadian duo of Wilde and Sarita winning the belts. They would hold the titles for 106-days, defending them at TNA Bound for Glory ’09 (against ODB & Tara) and again at TNA Turning Point ’09 (against the Beautiful People), before losing them in January of 2010 to Awesome Kong and her new partner, Hamada. 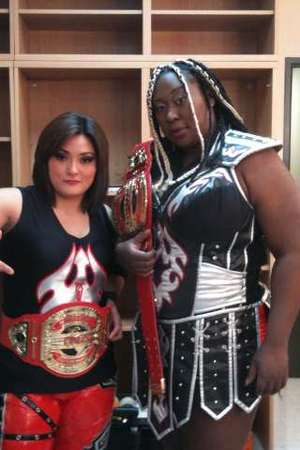 Awesome Kong and Hamada abandoned their original partners from the Knockouts Tag Team Tournament. Together,the two united as a new force in December of 2009. Kong was already a 2x TNA Knockouts Champion at this point (and a former NWA World Women’s Champion), while Hamada – the daughter of lucha legend Gran Hamada – was a 2x WWWA World Champion from All Japan Women’s Pro-Wrestling (AJW). Together they were a unit of decorated champions, both of whom had spent extensive time in Japan prior to arriving in TNA. Sadly, their reign only lasted 63-days, as Awesome Kong left TNA in March of 2010 while still champion, due to monetary reasons and the change in management with the company (the arrival of Hulk Hogan and Eric Bischoff). 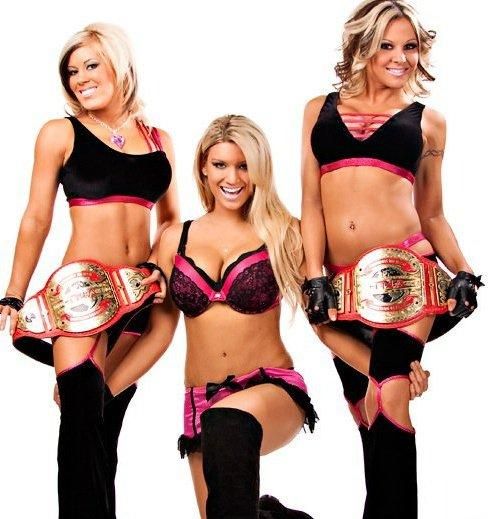 With titles vacated, on March 8, 2010, TNA officials made a match to crown new champions. A three-way tag team contest was held, featuring Taylor Wilde & Sarita, Angelina Love & Tara, and the new Beautiful People duo of Velvet Sky & Madison Rayne. The Beautiful People finally won the titles that night and held the titles for 141-days (a record that stood until the final title holders in 2013) and invoked the “Freebird Rule”, in that any combination of the trio – which also included Lacey Von Erich – could defend the titles.

Rayne & Sky defended the titles against former teammate Angelina Love and Tara at TNA Lockdown ’10 and in various television matches, until July 27, 2010, when the team of Von Erich Sky lost the belts to Taylor Wilde & Hamada on IMPACT! Wrestling. During this reign, Madison Rayne won the TNA Knockouts Championship twice, making her the first Knockout to be a double champion simultaneously (a feat she achieved twice during this tag team title reign). 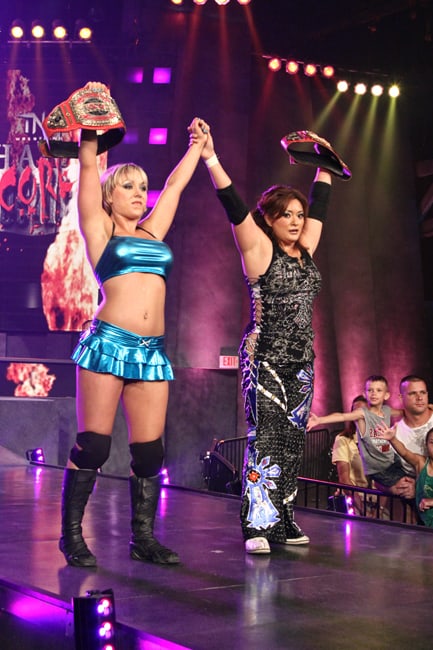 On June 27, both Taylor Wilde and Hamada became 2x Knockouts Tag Team Champions, when the two former champions united together to take out the Beautiful People. While they held the titles for 132-days, the team only made three title defenses (all against the Beautiful People), perhaps a sad realization that the new management in TNA was losing interest in the Knockouts Tag Team division. The reign ended much like Hamada’s previous reign did, although this time it was due to Hamada herself being released by TNA in December (although she had requested her release in October due to her lack of use by the company). Three days after Hamada was released, Taylor Wilde also revealed that she too had left the company, as her TNA contract had expired. She would retire from pro wrestling two months later, in February of 2011 (although she’s coming back!). 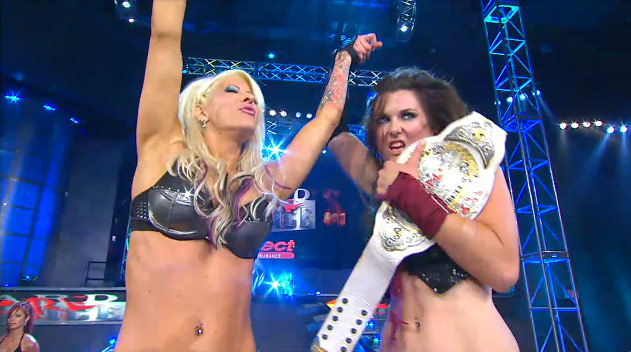 For the second time in a year, TNA found themselves without Knockouts Tag Team Champions due to the release of current title holders. TNA held a four-team tournament to crown new champions (again), featuring Madison Rayne & Tara, Mickie James & Miss Tessmacher (Brooke Adams), Daffney & Sarita, and the reunited Beautiful People team of Angelina Love & Velvet Sky. Prior to the finals, which was to be the Beautiful People against former member Madison Rayne and her new partner, Tara, Sarita injured Velvet Sky.

Winter (formerly Katie Lea Burchill in WWE who now competes as Katrina), who had been stalking Love for weeks prior, was chosen as Sky’s replacement for the finals, which saw Love & Winter win the titles. This alliance would undo the Beautiful People reunion of Love and Sky, as Love fell deeper under Winter’s “spell”. The duo only made two title defenses in their 94-day reign, defending once against Madison Rayne & Tara on TV, before losing in their second at TNA Victory Road ’11 in March to the new duo of Rosita (Thea Trinidad, recently Zelina Vega in WWE) and Sarita. 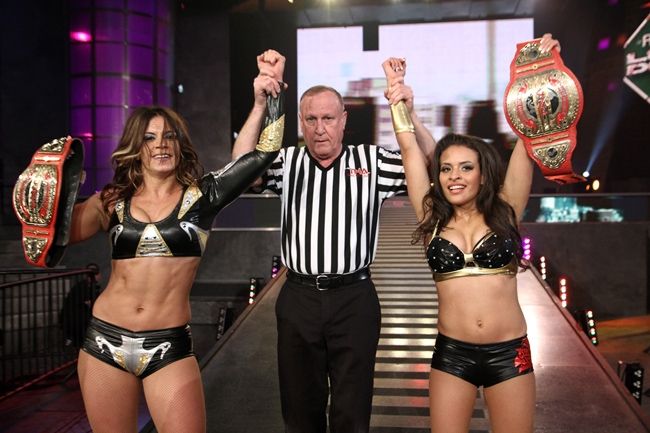 At TNA Victory Road ’11, the new tandem of Rosita & Sarita – who had only begun working together the previous month – captured the Knockouts Tag Team titles and the following week, joined with former LAX member Hernandez and the debuting Anarquia to form Mexican America. They would hold the titles for 121-days, defending against the Beautiful People, Madison Rayne & Tara, and others, before finally losing them to Miss Tessmacher & Tara in July. 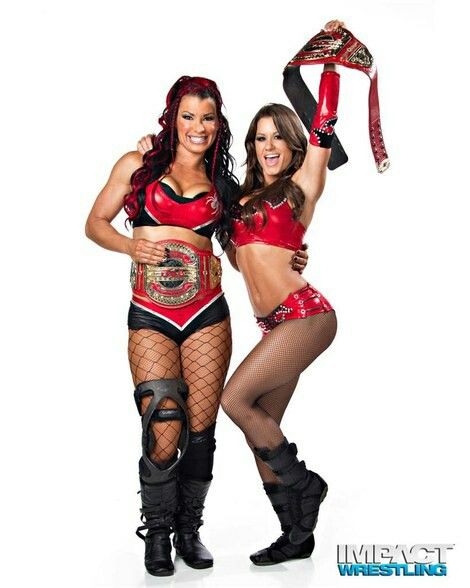 After failing multiple times to win the Knockouts Tag Team Titles with Madison Rayne or other partners, in May of 2011, Tara joined up with Miss Tessmacher to form the tandem known as TnT. In July, in their first attempt at the Knockouts tag team titles, they emerged victoriously, and would successfully retain them in a rematch against Rosita & Sarita at TNA Hardcore Justice in August. Like all the tag teams during the new era of TNA, they saw little action unfortunately in title defenses. Their third defense came in October (against Angelina Love & Winter), before losing them on October 26, 2011, to Gail Kim & Madison Rayne. 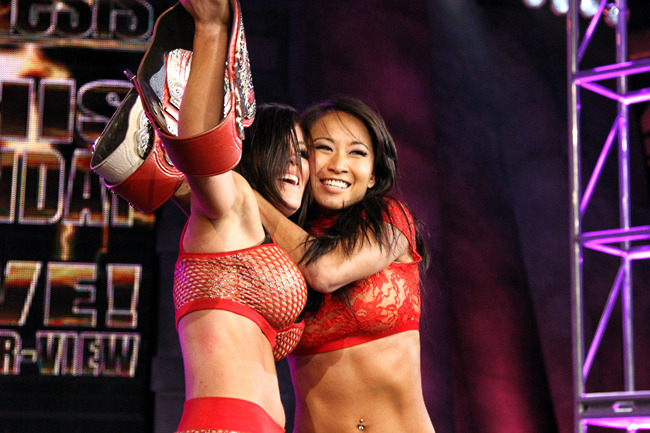 Madison Rayne was a 3x Knockouts Champion, while Gail Kim had just returned from her second stint in WWE, when the two united to form a tag team. Gail Kim had only been back in TNA a week, having defeated Tara in singles competition the previous week on television. The two proved to be quick and efficient, defeating TnT for the tag team titles, adding more hardware to their trophy cases.

Only a few weeks after winning the tag titles with Madison Rayne, Gail Kim defeated Velvet Sky at TNA Turning Point ’11 for her second Knockouts Championship, joining her tag partner Rayne as the only other Knockout to hold two belts simultaneously. Her Knockouts Title reign would last much longer than her run as tag champ though – despite it being for 125-days, Rayne and Kim only had three title defenses in their four-month reign, losing them on their third outing to the unlikeliest of teams in February of 2012. 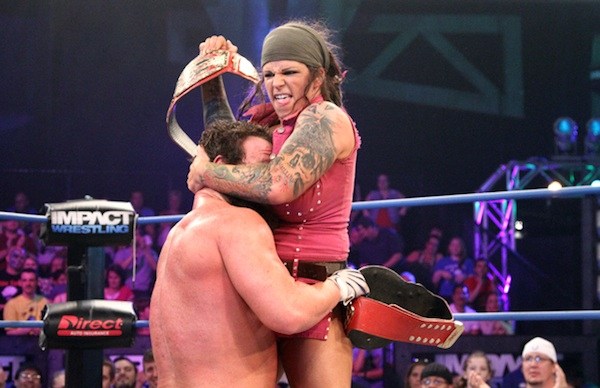 At the very end of 2011, 3x Knockouts Champion ODB began courting Eric Young and the two soon became inseparable, not just as a romantic couple but as a tag team. In mid-January of 2012, the duo began working together as a tag team, first taking down Angelina Love & Winter. They would continue to team on multiple TNA Live Events, before challenging Knockouts Tag Team Champions Gail Kim & Madison Rayne to a match at the end of February. Shockingly, the intergender duo won the titles, who would go on to defend the titles twice against Rosita & Sarita, including a decisive win at TNA Lockdown ’12 in April.

But after that title defense, ODB shifted her focus to the Knockouts title, and the TNA Knockouts Tag Team Titles were never defended again in TNA. It wasn’t until June of 2013, however, that TNA official Brooke Hogan finally stripped the duo of their titles – after not defending them for the past 431 days – due to them apparently only then deciding Young couldn’t hold them because he was a male. Despite only defending the titles for 47 days, TNA recognizes their full reign of 478-days as the record-setting reign for the titles. After being stripped from ODB & Young, the titles were quietly deactivated until the announcement by Madison Rayne in October of 2020 of their return to the company, with the winners of the final match this Sunday becoming the 10th team to wear the IMPACT Knockouts Tag Team belts.

Stay tuned to Last Word on Pro Wrestling for more on this and other stories from around the world of wrestling, as they develop. You can always count on LWOPW to be on top of the major news in the wrestling world, as well as to provide you with analysis, previews, videos, interviews, and editorials on the wrestling world.  Make sure to check out IMPACT on their  IMPACT plus!  service.