Arisu Endo has her third professional match against Maki Ito. This match will more than likely be under five minutes but Endo has been doing great work so far. Expectations of Maki is a lot of pandering to the crowd with her wild personality. Fans will be waiting a while before Endo gets her first rookie win though. 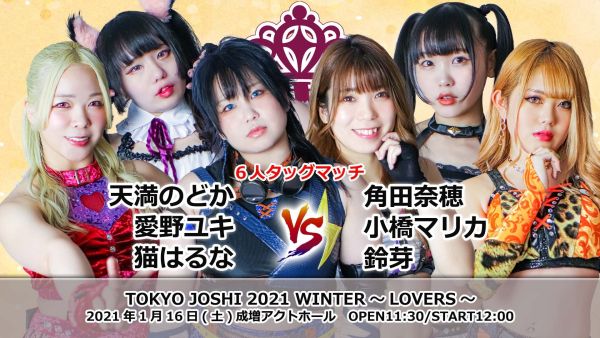 This match marks Marika Kobashi’s return after missing the January 4th show. Since coming back after her hiatus, she has been getting back into the swing of things nicely. Her partners, Nao Kakuta and Suzume, have been stepping up their game as of late as well which makes this team an interesting mix. The Princess Tag Team Champions, Nodoka Tenma and Yuki Aino, will team with Haruna Neko in this match. Neko and Tenma lost their tag match on the January 10th show to Hyper Misao and Shin Ultra Shoko, so hopefully, the champions can get back to winning ways in this one. 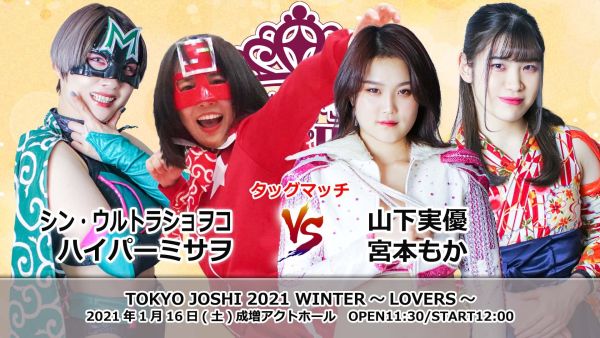 After defeating her at the January 4th show, Hyper Misao turned Shoko Nakajima into her superhero partner ‘Shin Ultra Shoko’. Already picking up a win at the January 10th show, these two have proven that they can work well together as a team. However, Miyu Yamashita is no easy opponent as she has yet to lose in 2021. While Moka Miyamoto only recently debuted, this will give her plenty of experience working with three of the stronger wrestlers in the company. This match at the Tokyo Joshi 2021 Winter～Lovers～ show could go either way but we could see Misao and Shoko pick up another victory. 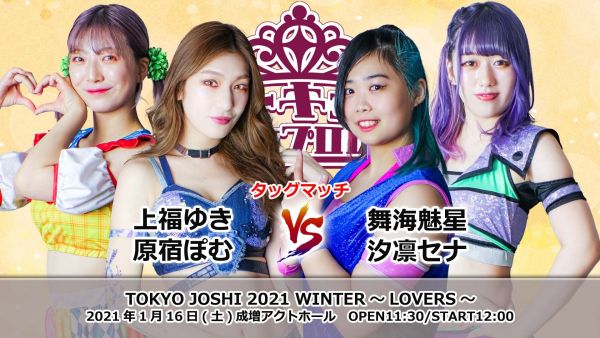 This serves as the preview match for Mirai Maiumi and Yuki Kamifuku’s big International Princess Championship match in February. Kamifuku has a lot to prove in this match-up as Mirai has been on a roll lately which got her the title shot. For their upcoming match, they may only give the fans a small taste of what’s to come to build up enough interest. Fans shouldn’t count out Pom Harajuku and Sena Shinori; they have been having good matches despite being on the losing end. Again, this is a match that is hard to call but don’t expect either Kamiyu or Mirai to be taking the pin. 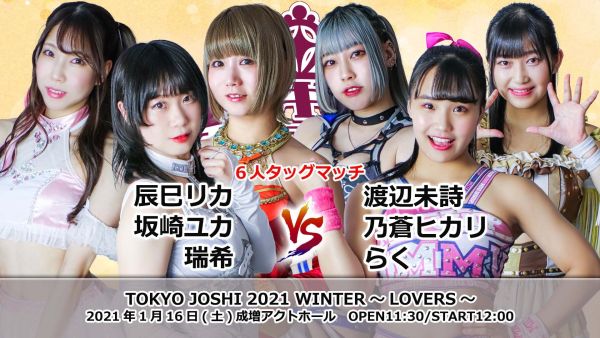 Rika Tatsumi, Yuka Sakazaki, and Mizuki vs. Up Up Girls

The main event also sees a preview match with Princess of Princess Champion Rika Tatsumi and Miu Watanabe of the Up Up Girls. This can easily be the match of the night with all of the star power and great wrestling skill. Of UUG, Hikari Noa and Miu have been the most impressive in both singles and tag competition. However, Hikari did lose to Yuka and Mizuki in tag action at the last show, giving Magical Sugar Rabbits confidence. Rika, so far, has proven herself against Miu in tag action. With their title match getting closer, Miu could step up in this one. While Raku hasn’t won since mid-December, she could easily be the dark horse, so keep an eye on her. Everyone involved has great chemistry together so a fun, fast-paced match at the Tokyo Joshi 2021 Winter～Lovers～ show will be the outcome. A lot is on the line next month so getting the edge will be vital.