2020 has been an interesting and challenging year for many wrestling companies. As one of the companies that found themselves needing to pivot, Ring of Honor’s Final Battle, normally the last PPV of the year, will end up being both the first and the last PPV for the company this year.

This year’s Final Battle, which will air on December 18th but was recorded on December 10th (below is a SPOILER FREE preview) is a culmination of a year that saw ROH undergo many changes both good and bad. Perhaps the biggest change was one that saw the company return its Pure Championship to action, removing the title from vacant for the first time in nearly 15 years. That title will be on the line at Final Battle for the first time since Jonathan Gresham won the championship at TV tapings in October. Also in action will be the returning Mike Bennett, who has re-aligned with his former Kingdom running-mate and IWGP tag team championship-winning partner, Matt Taven. RUSH will defend his title against a game Brody King and Danhausen will also have a match, and it’s a big one. If he wins, he gets an ROH contract, something the evil one has spent months lobbying for.

All this and more on this year’s Final Battle. You can view the full 10 match card below as well as some match highlights from what we anticipate will be a show well worth the year-long PPV wait.

With EC3 out of action, @jaybriscoe84 will address the situation on HOUR ONE streaming for FREE!

Brian Johnson vs Danhausen – If Danhausen wins, he will get an ROH contract 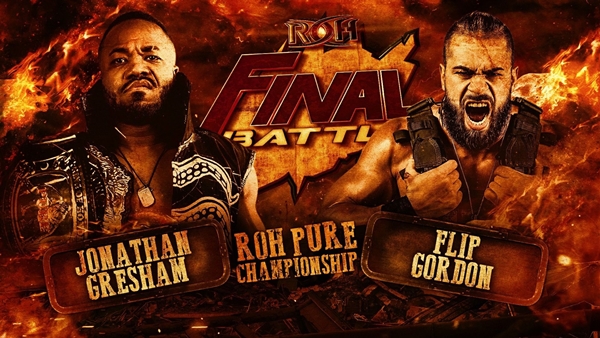 It is pretty rare for a wrestler to do double-duty – excluding battle royals – on a PPV, especially in today’s day and age where rosters are so big. Well, no one told ROH this as they don’t just have one wrestler set for double duty, but two. Likely to be the first match of the night, Tony Deppen, LSG, Dak Draper, and Josh Woods will compete for the right to take on Dragon Lee in a television championship showdown. Lee is approaching his one-year anniversary as champion, having won the title at last year’s Final Battle. He’s only had the opportunity to defend the title two prior times, the most recent of which came against Draper in February. That was Lee’s most recent match as well as the young star has been out of action since the pandemic forced wrestling companies to shut down in March. All of Lee’s opponents have seen a lot more in-ring action in 2020. But the good news for Lee is while there may be some ring rust, he’ll take on a wrestler who will have already gotten more than a little beat up by having to work two matches just to win the title.

Also in double-duty action is one of ROH’s biggest stars and the man who currently possesses what he calls the company’s top championship. That would be Jonathan Gresham, who has been on a huge roll lately and is certainly one of ROH’s MVPs of the pandemic era. Gresham was the star of the Pure Championship tournament, and it was no surprise when he ultimately won the final. And while the outcome was almost known from before the title began as Gresham is the perfect fit to advance the Pure brand into the future, what happened after his win was a little more unexpected. Gresham proclaimed himself the top champ in ROH and formed a faction through which he would bring pure rules and technical wrestling to the forefront. Gresham united with tag team partner Jay Lethal, Tracy Williams, and most recently Rhett Titus, to form the Foundation. And much like Gresham, the Foundation will have a huge presence on the Final Battle card. Titus and Williams will be in action taking on Fred Yehi and Wheeler Yuta in a rare pure rules tag team match, while Gresham will team with Lethal to defend their tag titles against Mark Briscoe and PCO. This will be one of two matches for Gresham on the night. He’s a double champion after all and on a card where all titles are being defended, Gresham will also be in action in a pure rules title defense of his newly won belt. This will be Gresham’s first such title defense and he’ll do so against Flip Gordon. There may not be a bigger star in ROH right now, so it is more than likely that Gresham will leave the night as he entered it – as a double champ.

After a big win vs Bateman, Matt Taven was down and out at the hands of the Righteous when Mike Bennett made his return to ROH to even the odds!

When Adam Cole and Mike Bennett left Ring of Honor, an injured Matt Taven promised that upon his return to the ring, he would rebuild the Kingdom in his own image. And Taven did just that, bringing longtime friend Vinny Marseglia and TK O’Ryan into the fold. Taven’s Kingdom was successful, becoming the first three-time trios champs in ROH, holding the titles for a combined 304 days over a three-year span. Taven also found singles success while leading the Kingdom, winning the ROH world title in 2019 in front of a sold-out Madison Square Garden crowd. Taven’s run on top was good for him, but not so much for the Kingdom, which was starting to show cracks. Ultimately, those cracks erupted as Marseglia, who changed his name to Vincent, left Taven lying in a pool of his own blood in an absolutely brutal beatdown. Taven was out for revenge so nearly a year ago to the day, the two former friends met in a grudge match at Final Battle 2019.

Their animosities never died down however and Vincent, alongside his partner Tyler Bateman in the Righteous, continued to torment Taven, who was constantly at the mercy of the numbers game. That was until a few weeks ago when Taven was joined by Bennett, who promised to have his friend’s back. Bennett was returning home where he belonged and right by Taven’s side. He debuted to stop Vincent and Bateman and made his in-ring return shortly after, defeating Vincent in his first match back in ROH in five years. Now, Bennett is set to team up with Taven for the first time in just as long as the OGK is set to ride again. Bennett announced he is here to stay in ROH so this match should no doubt be the first of many that sets the OGK into position to chase the tag titles for a second time.

Is Danhausen Headed for a Contracthausen?

While COVID-19 threw a curveball into things for ROH, thanks to the power of Twitter, one wrestler continued his quest to get a contract with the company. For the better part of the last year, Danhausen’s campaign to get hired by ROH has continued in earnest with promo videos, Cameos, and even official company merch. But through it all, Danhausen still wasn’t full able to convince the powers that be. But now he has a match where the stakes couldn’t be higher. Danhausen’s ROH PPV debut will determine his future with the company. While Danhausen did report to having signed with ROH in October, his expected victory at Final Battle will make things official.

You can read more about Danhausen’s quest for a contact and background information on the young wrestler, here.

Stay tuned to the Last Word on Pro Wrestling for more on this and other stories from around the world of wrestling, as they develop. You can always count on LWOPW to be on top of the major news in the wrestling world, as well as to provide you with analysis, previews, videos, interviews, and editorials on the wrestling world. Fans of Ring of Honor can check out more ROH on the Honor Club and can tune into Final Battle tonight at 7 PM ET (hour one is FREE).