After a long week of DDT Events, the tides have settled and new champions have been crowned. Now, as things go back to normal, DDT moves toward the annual D-ou Grand Prix; this will determine Tetsuya Endo‘s next challenger. DDT TV Show #12 is here to shake out some of the final loose ends and build up some anticipation for the beginning matches.

Two members of Junretsu face off against each other. Both have put on impressive performances recently. However, the rookie member of the roster will have an uphill battle as he faces a veteran. At the same time, Hideki Okatani has been taking to the teachings of Jun Akiyama very well, so this could be a major upset. This will be a match where Makoto Oishi hopes to stop Okatani as he tries to gather momentum for his first appearance in the D-Ou Grand Prix. 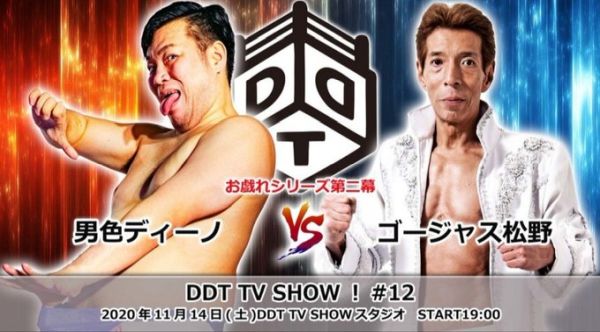 At DDT TV Show #11, Gorgeous Matsuno failed to defend the O-40 Title against Toru Owashi in its first defense since January. After the match, Matsuno demanded another shot at the title, prompting Danshoku Dieno to come out. Dieno didn’t challenge for the title. Instead, he tried to talk Matsuno out of the match, proclaiming he was obsessed with the title. During the argument, Owashi was able to walk away without a resolution to the conflict. This enraged Matsuno to the point where Dieno was the one who was challenged. As this is part of the Danshoku playfulness series, this one is going to be interesting, to say the least.

DAMNATION is back together at full strength! The two main leaders, Daisuke Sasaki and Current KO-D Openweight Champion Tetsuya Endo, will be taking on Antonio Honda and Keigo Nakamura. Nakamura is another rookie in the DDT system who has been praised for his ability to adapt to any situation they have thrown them in, even if it meant being paired with Antonio Honda. DAMNATION is in for some real tough mind games.

Takeshita and Co are known as the DDT SAUNA CLUB due to their bonding and live-tweeting their adventures in saunas. The team they have been put up against is a tough one, filled with former champions and one current champion in Toru Owashi. This one will be intense as almost all of these men are in the D-Ou Grand Prix. Additionally, many of them have had intense matchups with each other in the past. Will the Sauna Club come out on top, or will their momentum be put to a stop? 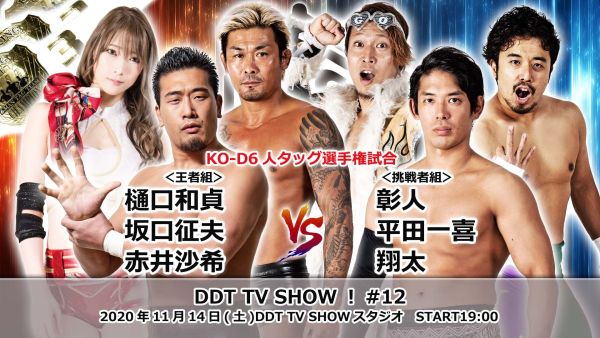 Eruption stands as the rulers of the tag division, holding both sets of tag titles. They stood open to any challenger at Ultimate Party 2020. Challengers stood forth, as Shota took the microphone and challenged them alongside Akito and Hirata. The match was quickly made for DDT TV Show #12 to not interfere with the Grand Prix. This marks Kazuki Hirata’s second title shot against Eruption so he is no stranger to them. Akito is always a strong contender being a former Six-Man Champion himself. The only wildcard here is Shota. This brings an interesting dynamic to the match. Will it be enough to overcome the dominant faction for the titles?