The Fallout from Full Gear will be felt tonight on AEW Dynamite. This past Saturday, AEW crowned new champions, new contenders, and new narratives that will shake up Dynamite. While this year almost a month away from being over, AEW will look to keep the pace in the ratings. Tonight will see some of AEW’s underrated talent headline in the aftermath of Full Gear. In a rematch from the World Title Eliminator Tournament, Penta El Zero M will wrestle Rey Fenix. Brian Cage will face Matt Sydal. Tay Conti takes on Red Velvet. MJF‘s induction into the Inner Circle. We will hear from Cody Rhodes after losing the TNT Championship this past Saturday. Finally, The Butcher and The Blade challenges the Natural Nightmares to a Bunkhouse Match. 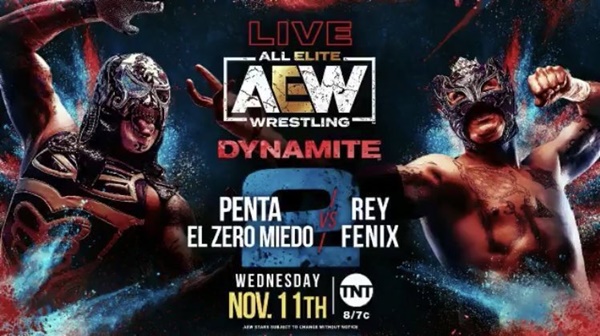 As tensions continue to mount, Penta El Zero M and Rey Fenix will look to settle their differences. Three weeks ago, in the World Title Eliminator Tournament, Fenix defeated Penta. Due to a neck injury, Fenix relinquished his spot to his brother. Penta would go on to lose to eventual tournament winner, Kenny Omega. Now the Lucha Bros will fight once more. Eddie Kingston and his Family have become prominent targets on AEW Dynamite. With Lance Archer gunning for them, this wrecking crew will try to remain unified against Eddie’s enemies in AEW. Given Eddie’s loss to Moxley, he will want to keep his family together and refocus. After losing to Fenix, Penta refused to shake his brother’s hand and was visibly upset. Will Mr. Ciero Miedo and the War Bird solve remain together? 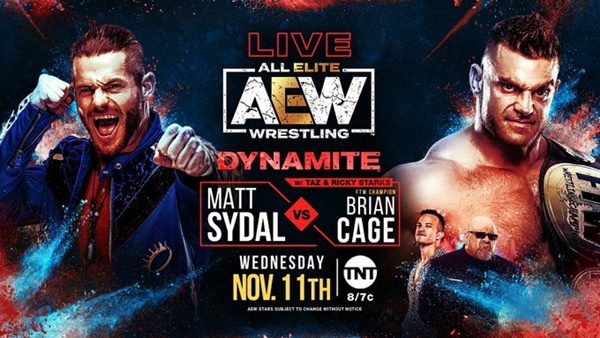 Two former X-Division Champions face off for the first time. The FTW Champion Brian Cage and the rest of Team Taz were none too happy about not having title matches on the Full Gear card. Now the Weapon X will look to take his aggression out on the Aerial Artist that is Matt Sydal. The former Evan Bourne has won 5 of his past 6 matches. An upset win could move him up the rankings and a possible shot at the FTW title. The Machine has dominated over on Dark and it’s clear both him and Ricky Starks will be coming for the TNT Championship.

Tomorrow night on Dynamite, @TayConti_ is back in singles competition as she steps up to Red Velvet (@theeredvelvett) Which wrestler comes out on top?
WATCH #AEWDynamite LIVE on @TNTDrama at 8e/7c. pic.twitter.com/K6W16VF0cu

After losing to Nyla Rose last week, Red Velvet will try to get back on track as she faces off against Tay Conti. Red Velvet has formed a partnership with Brandi Rhodes and the duo won a tag match together over on Dark. Meanwhile, Tay will be accompanied by her Women’s Tag Team Cup Tournament partner Anna Jay. After signing with AEW, Tay has received an offer to join both the Dark Order and Jurassic Express. Anna would love nothing more than for her friend to join the dark alliance. Meanwhile, Brandi and Anna have unfinished business after Brodie Lee‘s decimation over the Nightmare Family two months ago. Tensions will pick up as these two wrestlers are caught in the crossfires.

MJF is Inducted into The Inner Circle

It's a monumental moment!
Tomorrow on Dynamite, the induction of @The_MJF into the Inner Circle will take place LIVE!
WATCH #AEWDynamite on @TNTDrama at 8e/7c. pic.twitter.com/ufcupTVlua

With his victory over Chris Jericho at Full Gear, MJF will finally join the Inner Circle. Alongside Wardlow, The Salt of the Earth is going to become a member of AEW’s resident faction. For two months now, MJF has been adamant in joining the group to much resistance. Animosity will certainly brew between the members least of all Wardlow and Jake Hager. With Sammy Guevara‘s loss to Matt Hardy, he will be none too pleased this Wednesday night. MJF has earned Jericho’s respect and their new partnership will be very intriguing to watch going forward.

Natural Nightmares vs The Butcher & The Blade: Bunkhouse Match 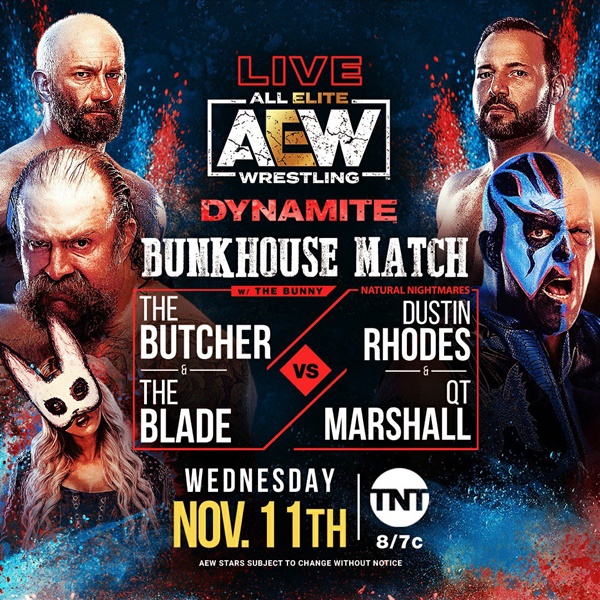 After getting his heart broken, and credit cards maxed out, by Allie, QT Marshall look for revenge against Butcher & Blade. The Bunny infiltrated the Nightmare Family, for some reason, and teamed with Brandi for months before turning her back on them on Dark. Now the two teams will settle the score in AEW’s first Bunkhouse Match. The Bunkhouse Stampede was a tournament held by Jim Crockett Promotions in the 80s. All four outings were won by the late great Dusty Rhodes. In 1987, Dusty and Big Bubba Rogers faced off in the finals of a Bunkhouse Match in which one wrestler had to throw the opponent outside of a steel cage. Now Dustin Rhodes looks to take inspiration from his father to lay the Smackdown. It’s unclear what the rules will be for AEW’s version of the match as of now. It will most likely be a hard-hitting fight that gets down and dirty.

Clarity & perspective.
Tomorrow on Dynamite, we will hear from the former TNT champion, 'The American Nightmare' @CodyRhodes.

On Saturday, Cody got his last name back after four long years. However, he lost the TNT Championship to Darby Allin. Afterward, Team Taz attacked both Cody and Darby to make their intentions known for the TNT Title. Cody Rhodes took on challenger after challenger to make the TNT Title the most important belt in AEW. Darby Allin finally bested his rival after a year and a half of their series. Team Taz is not happy about their lack of opportunities on AEW Dynamite and made an example out of Darby and Cody until Will Hobbs came to make the save. What will Cody have to say after losing his prized possession?