With big, beautiful eyes and a bubbly personality, An Chamu possesses a valiant fighting spirit. Recently, she’s returned to her stomping grounds of Gatoh Move Pro Wrestling, appearing on multiple episodes of ChocoPro. However, she has been with the company, as well as other organizations, long before then. From modeling to martial arts to professional wrestling, An Chamu has a story that’s nothing short of intriguing.

An Chamu was first exposed to wrestling at fourteen years old. According to her interview on The Joshi Pod, she didn’t initially believe the path of a wrestler was for her. Nonetheless, she enjoyed watching wrestling, especially Dragon Gate and one of its rising stars, Shingo Takagi. Prior to becoming a wrestler, An Chamu was a gravure idol; gravure is a type of artistic modeling that showcases idols in such attire as swimwear, lingerie, and costumes. For a time, An Chamu’s focus wasn’t on wrestling, but rather modeling.

This changed, however, when An Chamu met Emi Sakura, the founder of Gatoh Move Pro Wrestling. Sakura invited the young model to train under her. An Chamu had taken up martial arts principles such a kickboxing and Muy Thai in the past, so the transition to wrestling was apropos. An Chamu entered Gatoh Move in 2018 in the same generation as Mei Suruga; the latter would go on to become one of the top stars in the purple-and-yellow promotion. In addition to Ichigaya Chocolate Square, where most Gatoh Move events took place, An Chamu also learned at Pro Wrestling HEAT UP, headed by TAMURA.

An Chamu trained for only two weeks before making her official debut. This took place in July of 2018, when she faced her trainer, Sakura, in a losing effort. From there, An Chamu would go on to build experience through various matches in Gatoh Move. In addition to Sakura, An Chamu battled everyone from Gatoh Move stalwarts including Mitsuru Konno and Yuna Mizumori to other Japanese wrestling stars such as SAKI and Cherry. An Chamu came out on the losing end of her matches in her first year. However, she did earn a 3 Count Wrestling Women’s Championship match against Sakura. Once again, An Chamu’s mentor emerged victorious. An Chamu also made a one-off appearance for Ice Ribbon, Sakura’s previous home promotion, before 2018 came to a close.

During the beginning of 2019, An Chamu continued to ply her craft in Gatoh Move. Her battles against such opponents as Riho, who would go on to become the first AEW Women’s World Champion, showed tremendous potential, even when she came out on the losing end. In April, she made her first appearance for Pro Wrestling Society, based in Seoul, South Korea, where she battled Hibiscus Mii in a losing effort, The following May, An Chamu debuted for Japanese promotions Kirakira Taiyo Project and Pro Wrestling ZERO1. The young model turned wrestler was building her name not only in Japan but around the world.

In June, An Chamu picked up her first Gatoh Move victory when, alongside Riho and Baliyan Akki, she bested the team of Suruga, Sakura, and Masahiro Takanashi. In the months that followed, other promotions such as Actwres girl’Z began to feature An Chamu. She also worked a few matches in WRESTLE-1 against fellow idol Reika Saiki. The year of 2019 was a period of growth for An Chamu, as a wrestler, though 2020 would change the landscape of the industry around the world.

An Chamu’s last traditional Gatoh Move event took place this past March when she battled Suruga in the opening match. However, around the same time, the world had been shaken due to the COVID-19 pandemic. Due to this, many wrestling organizations were forced to cancel their future shows, Gatoh Move included. However, the organization used this as an opportunity to launch a new concept. Enter ChocoPro, Gatoh Move’s wrestling show on their official YouTube channel.

An Chamu made her ChocoPro debut on episode two, where she battled Sakura. Afterward, she took an extended break from Gatoh Move as well as most wrestling organizations in general. She made a one-off appearance for Dramatic Dream Team in August, teaming with Mizuki Watase and Akito in a winning effort over the trio of Super Sasadango Machine, Keigo Nakamura, and Yuna Manase. That same month, she announced that she would be taking a break to receive cervical cancer treatment. Fortunately, the procedure was successful. 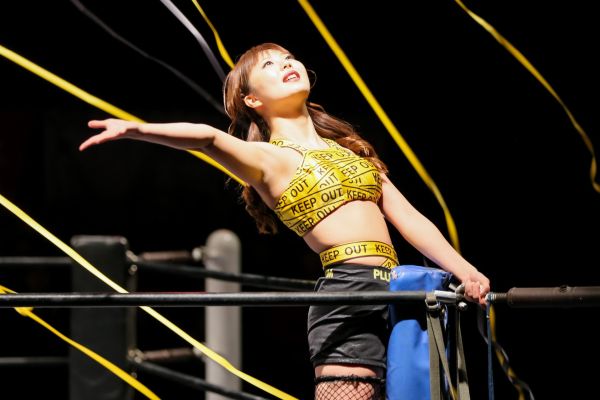 Earlier this month, An Chamu made her grand Gatoh Move return on episode sixty of ChocoPro. During her pre-match promo, she announced she was healthy again. An Chamu battled Sakura, the same woman that she had locked horns with multiple times in the past. Though An Chamu came out on the losing end, the match in question showed that her fighting spirit hadn’t waned. She would return for episode sixty-one, this time teaming with Suruga to defeat Pencil Army, the duo of Sakura and Lulu Pencil. Finally, An Chamu scored a victory over her mentor.

To say that An Chamu is a deceptively efficient wrestler would be an understatement. Her background as a model shouldn’t detract from the reality of her fighting prowess. Due to her martial arts training, she’s just as able to lock on a triangle hold or cross armbreaker as she is to strike a pose mid-match. What waits in the future of An Chamu, in terms of wrestling, remains to be seen. However, it’s safe to say that she will approach it with the same cheer and determination as she always has.

Check out past Joshi Watches and discover more stars from Japan!