Following on from last night’s NXT Halloween Havoc, NXT UK will hope to keep the momentum going as they host what looks like their strongest episode of the year, all thanks to that huge NXT UK Championship main event.

6️⃣ months in the making. 1️⃣ week to go. @WalterAUT vs. @UNBESIEGBAR_ZAR for the #NXTUK Championship.

It’s the match over six months in the making. The reigning NXT UK Champion, WALTER. The challenger, Ilja Dragunov. Dragunov has been waiting eagerly to challenge ‘The Ring General’ since the beginning of April, where he came out victorious in a Battle Royal to earn the right to challenge the Imperium man at NXT UK TakeOver: Dublin, which had originally been scheduled for the end of that month. With that event now postponed to next summer, however, the two rivals will now collide tonight, but of course, this isn’t the first time the duo have squared off. In Germany’s westside Xtreme wrestling (wXw), the pair have waged war a handful of times, while also holding the wXw World Tag Team Championships together, a reign that ended just over a year ago. It was here recently on NXT UK where Dragunov became the first person on the brand to pin the mammoth Austrian, giving him that extra boost of confidence he needs ahead of this title bout. Can ‘The Mad Russian’ continue that wave of momentum for this title match?

Having not been seen since the normal NXT UK shows stopped, Jordan Devlin recently returned to the brand by way of a vignette, issuing a warning to Santos Escobar. Of course, ‘The Irish Ace’ is still technically the NXT Cruiserweight Champion after winning the title from Angel Garza at Worlds Collide, with Escobar having become the interim champion over the summer due to Devlin’s absence. While his opponent hasn’t yet been announced, it’s been confirmed that Jordan will be returning to in-ring competition on this week’s edition of NXT UK. The official Cruiserweight Champion is looking to prove a point in his comeback, and whoever his opponent ends up being (we’re looking at you, Jack Starz) will be in for a rough night.

As well as Jordan Devlin, it’s also been announced that Joe Coffey will be making his return to NXT UK in the near future. The Gallus member was once an important part of the brand, having challenged for the NXT UK Championship in both of the NXT UK TakeOver: Blackpool main events, albeit unsuccessfully. It had been reported that ‘The Iron King’ had been suspended from the brand, pending an investigation into the allegations made against him over the summer, however, now that he’s on his way, it appears as if Coffey will be starting from the ground up once he shows his face. No word yet on whether he’ll remain associated with Mark Coffey and Wolfgang, who have only appeared once since the show returned to its usual format.

Following her win over Amale on last week’s show, Nina Samuels stated her next intentions – she’s coming for Piper Niven. To say Nina’s NXT UK run thus far has been subpar would be an understatement. She continuously makes out that she’s one of the biggest stars in the brand’s women’s division, yet fails to make any sort of real impact. However, by targeting ‘The Vixen of Violence’, one of the division’s pioneers, it gives her the chance she needs to put her name in the hat to challenge Kay Lee Ray further down the line. KLR has seen off all comers, so building up someone like Nina to be her next challenger seems like the most obvious option here. 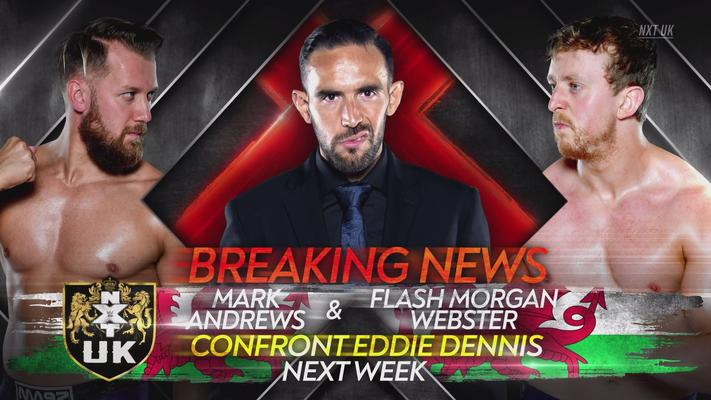 A few weeks ago, Flash Morgan Webster was found laid out backstage, with the culprit remaining unknown at the time of writing. However, there’s one man who firmly believes he knows the attacker’s identity, that man being Eddie Dennis. ‘The Pride of Wales’ returned to competition last week as he decimated Oliver Carter, before going on to blame Webster’s tag partner Mark Andrews for the assault. Outside of NXT UK, Dennis and Andrews are no strangers to one another, having been the inaugural PROGRESS Wrestling Tag Team Champions in their FSU partnership. While Dennis has recently been negotiating with Pretty Deadly (Sam Stoker and Lewis Howley), having he and Andrews form an alliance in NXT UK would be pretty deadly in itself.