In what was a year in the making (due to injury), the AEW World Heavyweight Champion, Jon Moxley, returned to Josh Barnett’s BloodSport 3 and in the main event defeated Chris Dickinson in what was a hellacious fight with so much back and forth that Mox could barely walk after the win. Mox won the fight via a submission choke.

After the match, Mox got on the mic and talked to the fans in attendance about the importance and power of Independent Pro Wrestling and how it needs to continue to grow for the betterment of the entire pro wrestling business. Jon Moxley then embraced Chris Dickinson as the fans applauded both for their outing and Dickinson for his efforts. 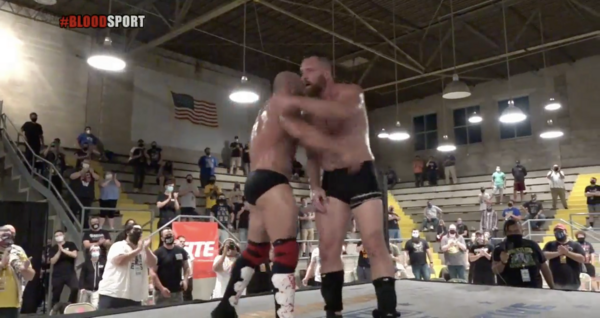 The rest of the card was a fantastic one all around. The night started with Simon Grimm taking on Matt Makowski. Makowski, no stranger to MMA coming into BloodSport with a 6-2-0 record lost the fight with Grimm by knockout after being hit with a half and half suplex.

The night continued with the women’s tournament and in the semi-finals saw former NXT UK performer Killer Kelly face off against the NWA’s Allysin Kay. An intense fight with strikes from both from beginning to end, but in the end, Allysin Kay won with a submission with a variation of the triangle choke to Kelly.

The next fight was the other semi-finals fight with Leyla Hirsch against Lindsay Snow in another brutal match up by both women. Hirsch who gave up the size on Snow still held her own but submitted to a heel hook applied by Snow. Snow advanced to the finals against Allysin Kay later on in the night.

The next fight of the night pinned Calvin Tankman defeating Alexander James by knockout. This was both men’s debut in BloodSport with Tankman having a little experience while James came out of WXW’s school and is trained by WALTER. The knockout came when both men had a striking exchange and Tankman rocked James with a powerful right hand, ending the fight then and there.

The next fight had Erik Hammer defeating “Grizzly” Kal Jak by submission. Hammer, who is the top student of Josh Barnett, came equipped with all the tools to successfully come out with a victory. And that is just what happened when Hammer caught Kal Jak with a double wristlock to win the fight.

The night got even more interesting when we saw one of the marquee matchups between “Filthy” Tom Lawlor fight Homicide. A great physical encounter with both men just give their all. Strikes, submissions, aggression throughout the entire fight. At the end of the fight, Homicide tried going for the Cop Killer finishing move when Lawlor then escaped and was able to counter with a seated half crab on Homicide, making Homicide tap out for the victory.

The next fight seemed like a one-sided fight as IMPACT Wrestlings Josh Alexander went up against MLW’s Davey Boy Smith Jr. who has come into BloodSport with a 3-0 record winning all of his previous fight in convincing fashion. As luck would have it, this fight would be no different as Davey Boy Smith won the fight by knockout when Smith hit Alexander with two stiff forearms to the jaw, a kick to the gut and then followed that up with a devasting Liger Bomb, leaving Alexander laying in the ring motionless.

In the co-main event, Lindsay Snow went up against Allysin Kay in the finals of the Women’s tournament. The was by far the match spent mostly on the mat with grappling and wrestling. A very scientific match that essentially ended in a submission finish when Lindsay Snow was able to catch Allysin Kay with the heel hook resulting in the tap out by Allysin Kay. Snow becomes the first BloodSport women’s tournament champion. At the end of the fight, Josh Barnett came out to thank both women and award Snow with a trophy.

This was an overall excellent card with what looked like a much bigger crowd despite the social distancing regulations. Everyone in attendance wore their masks and the crowd was extremely lively throughout the entire night. Here’s looking to another installment of Josh Barnett’s BloodSport.

For all other wrestling related news and stories from the major companies and Indy Pro Wrestling please visit the Hamin Media Group on podbean where you’ll get expert analysis, feedback, news from names in the business such as former OVW talents such as Bin Hamin, WWE former talent Stevie Richards, OVW’s Ted McNaler, ROH producer Michael Jargo, A Bill Apter protege in Big-Ray Hernandez, Ric Vickrey and more.

Stay tuned to the Last Word on Pro Wrestling for more on this and other stories from around the world of wrestling, as they develop. You can always count on LWOPW to be on top of the major news in the wrestling world, as well as to provide you with analysis, previews, videos, interviews, and editorials on the wrestling world. GCW Josh Barnett’s Bloodsport can be seen on FITE.tv. Looking to talk wrestling, pro football, or any number of sports? Head on over to the LWOS Boards to engage in conversation with fellow fans!