While regular NXT has the upcoming Halloween Havoc special to look forward to on October 28th, NXT UK rolls on with the Heritage Cup Tournament this week, as another first round contest has been scheduled. 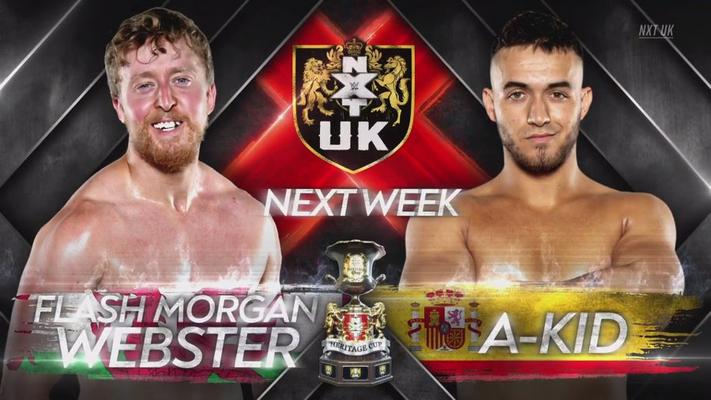 Following Noam Dar advancing to the semifinals of the Heritage Cup Tournament over Alexander Wolfe in last week’s main event, we’ll determine his next round opponent this week as A-Kid battles former NXT UK Tag Team Champion, Flash Morgan Webster, in what is sure to be a tournament-stealing contest. We haven’t really seen too much of the Welshman as a singles performer in NXT UK, as his South Wales Subculture pairing with Mark Andrews has dominated his career for the past two years. In fact, his most recent singles match on the brand – not including the Battle Royal from this past April – was last August as he defeated Mark Coffey, so he doesn’t exactly have the smoothest transition back into singles competition. A-Kid isn’t to be taken lightly, as he’s proven each and every time since he joined the brand. Impressive showings against the likes of Joseph Conners, Ilja Dragunov, and The Brian Kendrick have landed him a spot in the field of eight. 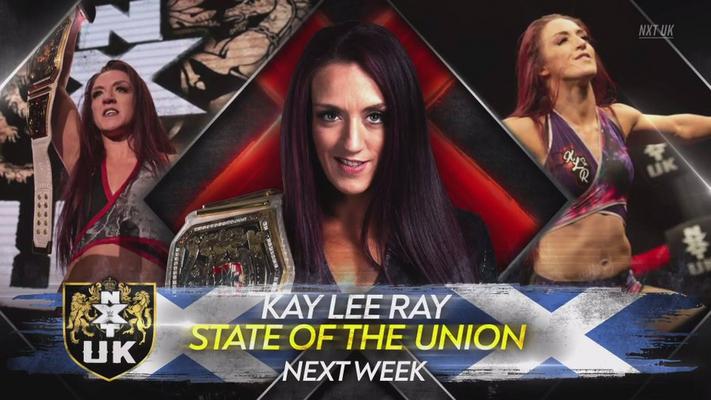 When it was announced that Kay Lee Ray would be putting her NXT UK Women’s Championship up for grabs against Piper Niven, many fans jumped to the conclusion that ‘The Vixen of Violence’ would be the one to end KLR’s reign of terror over the women’s division. However, another successful defence would further cement ‘The Queen of Insanity’s’ legacy within NXT UK, leading us to her State of the Union address this week. It’s near enough a given that we’ll get a glimpse at her next challenger here. With Piper Niven again being unsuccessful, and Toni Storm officially departing for regular NXT, it’s time for a new challenger to step up to the plate. Both Xia Brookside and newcomer Aoife Valkyrie have been proving themselves so don’t be surprised to see either of them interrupt Kay Lee, however, it was last week when Jinny put the women’s division on notice. The reigning PROGRESS Wrestling Women’s Champion is all about the nice things in life, but could we be set to see ‘The Fashionista’ add the NXT UK Women’s Championship to her wardrobe?

When the NXT UK Heritage Cup Tournament was announced, all but one spot was confirmed, with a Triple Threat Wild Card Match removing the vacant spot last week. That bout saw Kenny Williams victorious over both his tag team partner Amir Jordan, as well as Ashton Smith, to earn the final spot in the bracket. This means he will now face Trent Seven in the opening round at a to be determined date, with either Dave Mastiff or Joseph Conners awaiting the winner of that bout in the semifinals. It’s not exactly the easiest road to the finals for Kenny Williams, but if there’s anyone who can make it happen, it’s certainly ‘The Lucky Yin’.

The brilliant @EddieDennis1986 sees quite a bit of potential in PRETTY DEADLY it seems…#NXTUK pic.twitter.com/U97Ra5CiqP

Two weeks ago, Pretty Deadly (Sam Stoker and Lewis Howley) were successful in their contest against The Hunt (Wild Boar and Primate), as they edge closer to challenging Gallus (Mark Coffey and Wolfgang) for the NXT UK Tag Team Championships. After the bout, however, they were joined on the stage by one Eddie Dennis, with ‘The Pride of Wales’ having some sort of discussion with one of the brand’s fastest-rising tandems. Dennis himself is no stranger to tag team success, being one half of the inaugural PROGRESS Tag Team Champions alongside Mark Andrews. Perhaps Eddie Dennis is the key to success for Pretty Deadly.

#AndNEW: Cody Recaptures The TNT Title
Preview: FLAWLESS Wrestling — A League Of Their Own (10/10/20)