Game Changer Wrestling is set to have the most prominent presence during The Collective. Perhaps the most important event in this showcase is For The Culture. This event is designed to showcase various wrestlers of color across the independent scene. Not only will GCW bring in talents on the rise, but names from the past that long-time fans may be surprised to see. GCW For The Culture was originally set to take place this past April. As well as many other events, it was canceled due to COVID-19. Though it is now an autumn event, its importance hasn’t diminished. Here are the scheduled matches that fans can look forward to. 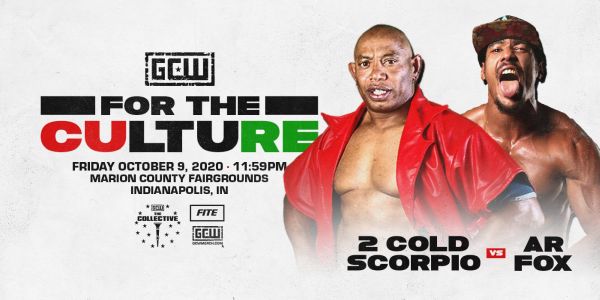 The first name from the past announced for GCW For The Culture was 2 Cold Scorpio. This high-flying legend made his name across various promotions, including World Wrestling Entertainment and Extreme Championship Wrestling. He enjoyed various accolades, including 4 separate runs with the ECW World Television Championship. What may intrigue fans is that he still works events to this day. For The Culture marks his first show since COVID-19 and to say that he will return to a challenge would be an understatement.

Not unlike 2 Cold Scorpio, AR Fox has made a name for himself as one of the most high-flying, death-defying stars in wrestling. He’s also been in previous GCW events. These include Tournament of Survival 5 in August, where he won the six-man Scramble Match. Even outside of GCW, Fox has been incredibly successful, especially in promotions including EVOLVE Wrestling and Combat Zone Wrestling where he’s been a titleholder. This upcoming match against 2 Cold Scorpio will be one of the greatest challenges in Fox’s career and should make for a match to remember. 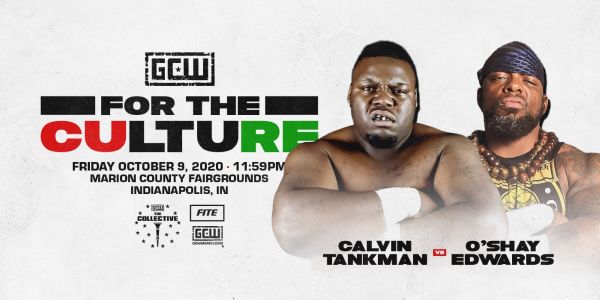 From Black Label Pro to GCW and beyond, Calvin Tankman brings with him incredible fan support. The “Indestructible” indie star from Indiana has amassed popularity in relatively short order. This has been due to his hard-hitting affairs with the likes of Erick Stevens and Tony Deppen, just to name a few. For The Culture will prove to be yet another platform where this powerhouse will make a name for himself. Furthermore, he will go up against an opponent that has enjoyed his own recent burst of popularity.

Originally, Tankman was set to face All Elite Wrestling star Will Hobbs. However, due to various circumstances, Hobbs was pulled. GCW went on to announce Jon Davis as Tankman’s new opponent, only for Davis to be removed due to knee issues. Tankman wasn’t without an opponent, though, as GCW announced he would instead face reigning Prime Time Pro Wrestling Champion, O’Shay Edwards.

Known as “The Big Bad Kaiju,” Edwards brings his own brand of brawling to For The Culture. Originally from Rex, Georgia, Edwards began his training in 2015 under the legendary Ricky Morton. Since then, Edwards has not only made his mark in his home state but other regional organizations, including the South in Southern Honor Wrestling and ACTION Wrestling. He even spent time plying his craft in Ring of Honor. Simply put, Tankman has a sizable challenge ahead of him. 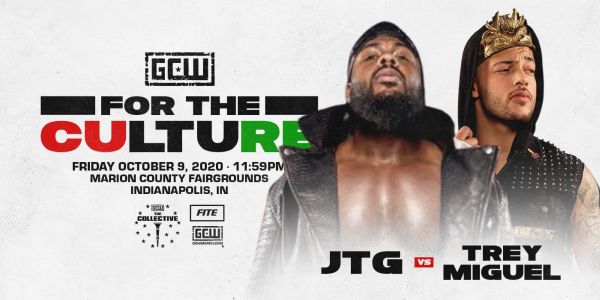 Another name from the past that wrestling fans may be familiar with is JTG. He’s best known for his time in WWE, where he teamed with the late Shad Gaspard as Cryme Tyme, entertaining fans around the world. Following his release, JTG worked with Gaspard across the independent scene, including Bar Wrestling and GCW. Following the passing of Gaspard, JTG returned to the independents this past August, where he faced Brian Cage at the Violence X Suffering event, No Justice, No Peace.

At For The Culture, which marks JTG’s first GCW appearance in over a year and a half, he takes on the fast-paced star in Trey Miguel. The high-flying “Fresh Prince of Mid-Air” has been especially prominent in IMPACT Wrestling as of late. He was even world title contendership against larger opponents including Moose. Miguel has also been successful independently, including in Rockstar Pro Wrestling where he held the company’s top title twice. Miguel will make his GCW debut at For The Culture and it’s set to be a night to remember.

“Rich Homie Juice” AJ Gray is no stranger to GCW. At last month’s Bring Em Out event, he defeated Mance Warner in a ferocious contest. This year alone saw Gray defeat Chris Bey, KTB, and Lucky 13 in separate matches within the promotion. As a former GCW World Champion, Gray isn’t shy about exercising his power or speed. Gray will be up against a formidable challenge at For The Culture, though, when he takes on Dezmond Xavier.

Currently, Dezmond Xavier is seeing success in IMPACT as a remember of The Rascalz, which also includes Miguel, Zachary Wentz, and Myron Reed. Together with Wentz, Xavier held tag team gold across numerous promotions, including CZW, Southside Wrestling Entertainment, and Pro Wrestling Guerrilla. At For The Culture, Xavier will have to work solo as he challenges Gray. Expect this match to be a showcase of strength and agility alike.

In yet another match that will feature stars taking to the skies, For The Culture shifts its focus to ACH and Lee Moriarty. Known largely for his work in Ring of Honor, “Super” ACH has been wowing audiences across various promotions. Wrestling fans can catch him on NJPW Strong, where he’s a semi-regular competitor. Given his success in GCW, including a DDT Ironman Heavymetalweight Championship victory at Keep in Touch earlier this year, defeating ACH won’t be an easy task.

Nonetheless, Lee Moriarty is up for the challenge. Dubbed “The Apex of Combat,” Moriarty isn’t shy about exercising aerial offense. This Pittsburgh native has been successful in Pro Wrestling eXpress, Ryse Wrestling, and elsewhere. However, his recent luck in GCW hasn’t been the best. Case and point, Moriarty and Tre Lamar failed to defeat Ironbeast at Bring Em Out. Can Moriarty right the proverbial ship with a huge victory over ACH? Tune into For The Culture to find out.

This four-way match can best be described as a showcase of colorful personalities. The “plus-sized Pam Grier” Faye Jackson has been featured in promotions ranging from Ring of Honor to Pro Wrestling Magic, the latter where she is the current Women’s Champion. Devon Monroe, who is set to deliver “Black SEXcellence” at For The Culture, has been steadily rising through the ranks. It’s also worth noting that Jackson and Monroe faced off at this past September’s Black Wrestlers Matter event, with the latter picking up the win.

Another star featured in this four-way contest is Marti Belle, known for her time in the National Wrestling Alliance, IMPACT Wrestling, and elsewhere. She is also one half of the current SHINE Tag Team Champions, which is yet another example of her experience. Finally, Willow Nightingale will have her place to flourish at For The Culture. Nightingale got her start wrestling in New York, her home state, as well as Northeast at large. She is also a three-time NYWC Starlet Champion, being the only wrestler to accomplish such an accolade. This is a four-way match brimming with talent and all the more reason to tune into For The Culture. 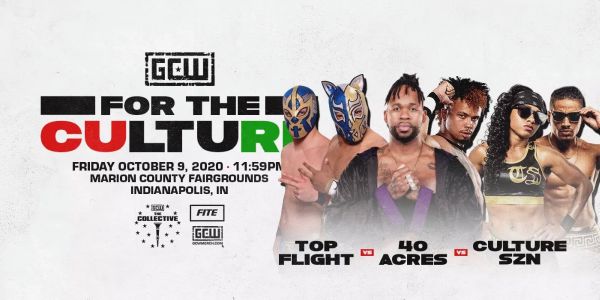 No major event is complete without tag team action. At GCW For The Culture, this trio of tandems will tangle. Top Flight is the duo comprised of Angel Dorado and Air Wolf, both of whom are known for their high-flying offense. Together, they teamed in organizations including Preston City Wrestling and Warrior Wrestling. With each match, they have wowed more viewers with their aerial offense.

Representing 40 Acres will be the duo of PB Smooth and Tre Lamar. Smooth and Lamar are a strong contrast, pairing the former’s powerful offense with the latter’s high-flying skill set. 40 Acres became prominent in Absolute Intense Wrestling, but at For The Culture, this group intends to make their mark on GCW soil and take the victory, no matter the cost.

Last, but not least, Culture Szn will have its presence at For The Culture. Individually, they are Tasha Steelz and Christian Casanova, making them the sole intergender team of this match. They made their tandem debut in Beyond Wrestling this past August, facing Jordan Oliver and Myron Reed of Injustice. Can Culture Szn seize victory at For The Culture as their team momentum builds?

Trish Adora is nothing short of decorated. In addition to being the current GCW Women’s Champion, she is the proud holder of the Pan-Afrikan World Diaspora Wrestling Championship. The latter title represents her culture; thus, her role as champion is one she takes with great pride. This former United States Army servicewoman has become incredibly popular on the independent scene, both in GCW and elsewhere. At For The Culture, she defends the green strap against a viral sensation in his own right.

Known as “Pineapple Pete” to AEW fans, Suge D enjoyed considerable attention in the aforementioned promotion. A combination of witty commentary by Chris Jericho and several matches on AEW Dark bolstered his popularity. This isn’t to say that he lacks experience. He went pro in 2003, wowing audiences in CZW, EVOLVE, and CHIKARA, just to name a few organizations. At For The Culture, Suge D has the chance to become the next PAWD Championship. Regardless of the outcome, this match will add to the title’s young yet promising legacy.

GCW For The Culture will take place at Marion County Fairgrounds in Indianapolis, Indiana, on October 9th, 2020.

Tickets for the events are on sale now. For those that are unable to attend live, For The Culture will air live on FITE.tv; further details can be found below. GCW For The Culture is part of a larger project known as The Collective. Be sure to check out other events during this block and support independent wrestling!

Stay tuned to the Last Word on Pro Wrestling for more on this and other stories from around the world of wrestling, as they develop. You can always count on LWOPW to be on top of the major news in the wrestling world, as well as to provide you with analysis, previews, videos, interviews, and editorials on the wrestling world. GCW For The Culture airs on Friday night at 11:59 PM EST live on FITE.tv. Looking to talk wrestling, pro football, or any number of sports? Head on over to the LWOS Boards to engage in conversation with fellow fans!