This Sunday, from Williamstown, New Jersey, Violence X Suffering presents Legends Never Die! The New Jersey-based promotion, featuring an eclectic group of competitors, has a stacked card lined up. For those that are attending live, the excitement is undeniable. However, for those that are unable to see the show in person, details on how to watch can be found below. There will be some firsts, as well as a notable farewell. Without any delay, let’s get into the action confirmed to take place at VXS: Legends Never Die. 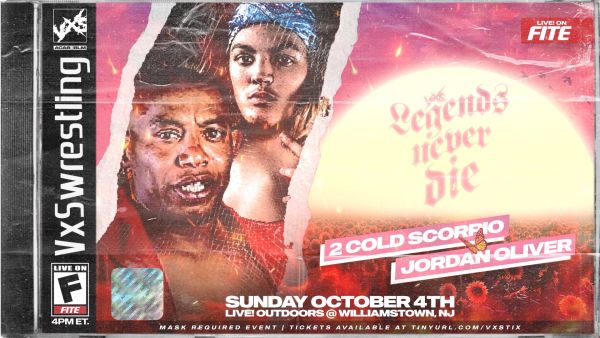 To say that 2 Cold Scorpio has an eventful month would be an understatement. This wrestling legend will also take part in GCW For The Culture less than a week following this event. Anyone familiar with the world of 2 Cold Scorpio will attest to his high-flying offense, which has been on display everywhere from Extreme Championship Wrestling to World Wrestling Entertainment and beyond.

On this night, he’s set to face off against Jordan Oliver, a confident, high-flying star in his own right. Despite his loudmouthed demeanor, he’s nothing short of capable from bell to bell. The 21-year-old New Yorker is still making a name for himself, and at Legends Never Die, he intends to do so at the expense of 2 Cold Scorpio. 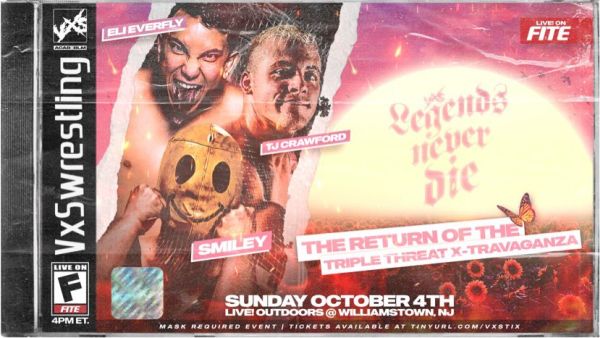 It’s time for the Triple Threat X-Travaganza and what a match this promises to be. Eli Everfly is a name that many independent wrestling fans should be familiar with. “The Fly” has been a consistent presence in not just VXS, but GCW, Bar Wrestling, and beyond. He took part in last month’s three-way match, though he came up short in the encounter. He plans to make Legends Never Die a win, though one of his obstacles will be TJ Crawford.

Hailing from Chicago, Illinois, Crawford is no stranger to VXS, either. However, he’s worked in other promotions including Synergy Pro Wrestling, where he is the current Cruiserweight Crown Champion. Smiley can best be described as the wildcard of this match. This high-flyer from Maine features a mask that, despite its trademark smile, could be considered unsettling to some. Smiley has participated in numerous VXS events in 2019, though this will be his first VSW showing of 2020. Can he pull out a win at Legends Never Die? 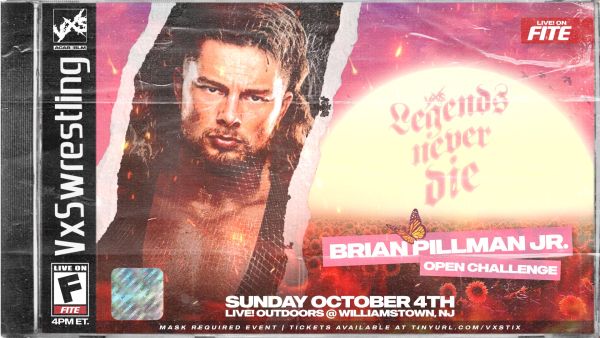 VXS: Legends Never Die will also be a platform for a young star to issue an open platform. Recently, Brian Pillman Jr. has been regularly appearing in All Elite Wrestling, especially AEW Dark. Before then, he’s worked across numerous independent promotions, including Warrior Wrestling, where he became the promotion’s top champion earlier this year.

At Legends Never Die, however, he is set to issue an open challenge to anyone looking to compete. Open challenges are seldom dull, as anyone can respond. Will the young Pillman’s challenge be answered by a VXS veteran? Will an individual making their debut for the promotion in question step up to the plate? Viewers will have to tune in this Sunday to find out. 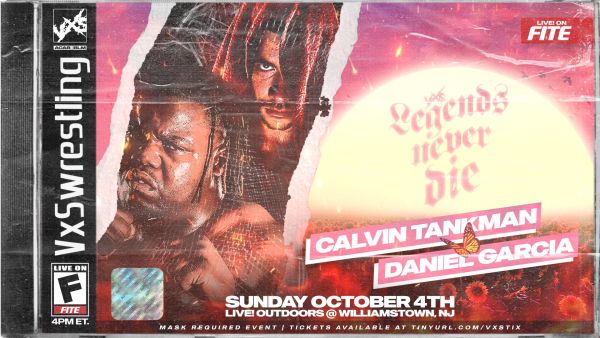 In one of the first-time encounters at VXS: Legends Never Die, “Heavyweight Hustle” will be met with “Red Death.” Another star that will be participating at For The Culture, Calvin Tankman is, at the risk of sounding forced, a tank of a man. Despite his strength-based offense, he isn’t shy about engaging in hand-to-hand combat or even flying through the skies. His unique breed of offense has made him a popular name in the independent scene, but at Legends Never Die, he meets an up-and-coming star in the form of Daniel Garcia.

Most recently, Garcia been appearing on AEW Dark, but his work across various organizations speaks for itself. Limitless Wrestling and Beyond Wrestling are just a few locations where viewers have been exposed to the young wrestler from Buffalo, New York. Can he continue to build his name with a victory over Tankman at Legends Never Die? 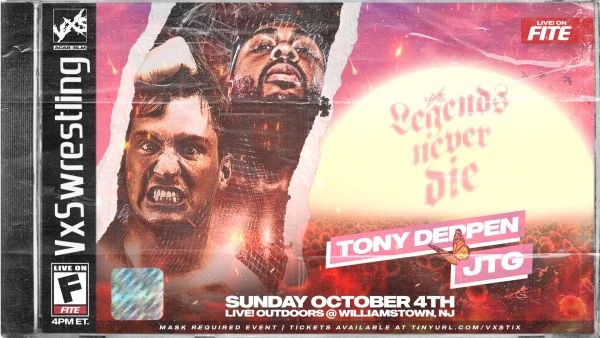 Another first-time encounter to take place at VXS: Legends Never Die will be Tony Deppen versus JTG. Deppen is among the most seasoned independent wrestlers today, possessing a technical mindset and the ability to captivate a crowd through words. His success over the years, especially in promotions such as CHIKARA and GCW where he’s been a titleholder, cannot be overlooked.

On this night, he will encounter the man known as JTG. Wrestling fans will be immediately familiar with the name due to his time in WWE, where he teamed with the late Shad Gaspard as the charismatic Cryme Tyme. However, JTG has been able to branch off into singles competition. In fact, he returned after several months of inactivity at VXS’ previous event, No Justice, No Peace, where he battled current FTW Champion Brian Cage. Keep in mind that JTG is another star that will be competing at For The Culture; this fighter has a packed month, to say the least. 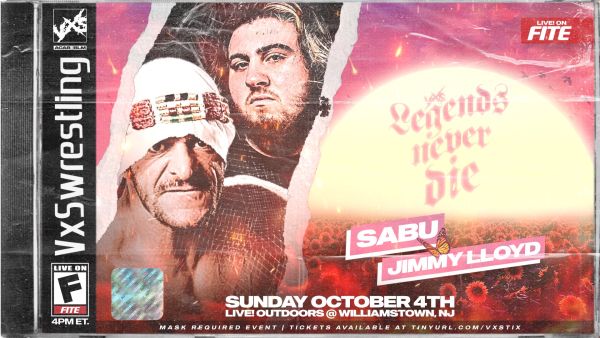 Not only will this be yet another match to take place for the first time, but it will be one where caution is likely to be thrown to the wind. To say that Jimmy Lloyd is a risktaker would be an understatement. From setting himself on fire to his utilization of various weapons, Lloyd’s moniker as the “Different Boy” is well-earned. Furthermore, he’s been successful in VXS in the past, as evidenced by his victory over AR Fox at No Justice, No Peace.

To secure a victory at Legends Never Die, however, he will have to overcome a “Homicidal, Suicidal, Genocidal” challenge. Enter Sabu, the hardcore legend best known for his time in ECW. During his time in said promotion, he’s became a two-time World Heavyweight Champion, battling the likes of Taz and Terry Funk along the way. Legends Never Die marks Sabu’s first wrestling match since February, and with an opponent like Lloyd, the legendary star will have to pull out all the stops to win. 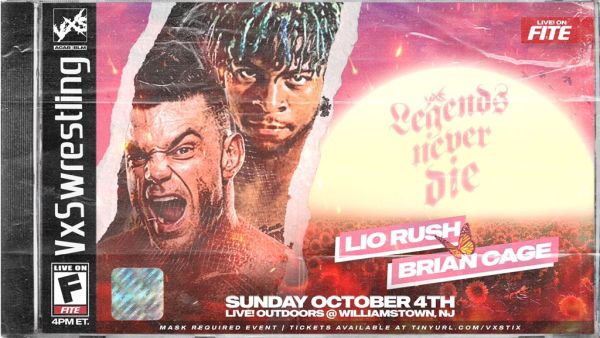 Originally, Brian Cage was set to face Blake Christian at VXS: Legends Never Die. However, due to various circumstances, Christian was pulled. This wasn’t to say that the FTW Champion was fresh out of challengers. It’s fair to say that Cage has had a successful 2020 thus far, from signing with AEW to aligning himself to Taz to holding the very title his manager introduced in 1998. Who will be the next wrestler to stand in “The Path of Cage?”

None other than the 25-year-old “Piece of Gold” himself, Lio Rush. This past July, Rush returned to the independent scene at GCW Homecoming Weekend, facing Joey Janela in what many considered the best match of night two. Rush’s high-flying offense has led him to various accolades throughout his career, but at Legends Never Die, he will play David opposite Cage’s Goliath. Who will emerge victorious in this contest pitting speed against power? 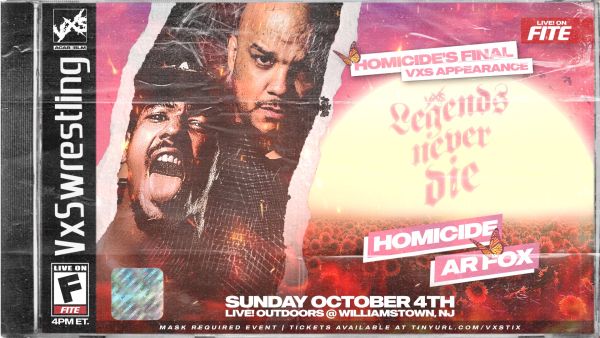 VXS: Legends Never Die will be significant in that it marks Homicide’s final appearance for the promotion. To say that this took VXS fans by surprise would be underselling the response. Consider that he has made multiple appearances for the promotion in the past, most recently at No Justice, No Peace, where he battled Tankman. He’s also been involved in a Street Fight with Nick Gage last year. Simply put, Homicide’s farewell will be an event to witness.

VXS chose an incredible opponent for him as well. Enter AR Fox, whose aerial offense has made him one of the premier stars of independent wrestling. It was this style that led Fox to multiple accolades in Combat Zone Wrestling and EVOLVE Wrestling, among other organizations. To be chosen as the last VXS opponent for Homicide is an honor. Needless to say, this will be a match not to miss.

VXS: Legends Never Die is set to take place at the H2O Wrestling Centre, in Williamstown, New Jersey, this Sunday.

The doors open at 3 PM EST, bell time is set for 4 PM EST. Tickets are still on sale and can be purchased via Eventbrite. The event will also be streamed live on FITE.tv. For fans that will be attendance, keep in mind that the event will be held with outdoor seating and limited capacity. It will also be managed on a first come, first served basis, so arrive ahead of time. Furthermore, masks and face coverings will be required and social distancing will be enforced throughout the event.

Stay tuned to the Last Word on Pro Wrestling for more on this and other stories from around the world of wrestling, as they develop. You can always count on LWOPW to be on top of the major news in the wrestling world, as well as to provide you with analysis, previews, videos, interviews, and editorials on the wrestling world. VXS Legends Never Die airs on Sunday night at 4 PM EST live on FITE.tv. Looking to talk wrestling, pro football, or any number of sports? Head on over to the LWOS Boards to engage in conversation with fellow fans!