Following their return to active competition seven nights ago, NXT UK‘s second episode back sees a monumental title match to cap off the night’s proceedings, as well as the return of an NXT UK icon.

They’ve battled all over the world, from Glasgow’s SSE Hydro to London’s York Hall to Kyoto’s KBS Hall, and now, the storied rivalry between Kay Lee Ray and Piper Niven comes to an NXT UK ring as KLR puts her Women’s Championship up for grabs opposite ‘The Vixen of Violence’. The history between these two dates all the way back to 2012 when the pair shared a ring for the first time in a Rumble Match at a RAD:PRO Wrestling event, and ever since, they’ve battled over the Fierce Females (FF) Scottish Women’s Championship, the World of Sport Wrestling (WOS) Women’s Championship, and the Pro Wrestling: EVE Championship, amongst others. We could go on and on as it pertains to the duo’s backstory, however, their history in NXT UK isn’t exactly new either. Both Piper and former champion Toni Storm challenged ‘The Queen of Insanity’ for the title at NXT UK TakeOver: Blackpool II in unsuccessful fashion, while this match will mark Niven’s first one on one opportunity at the championship. Will she be the one to bring an end to KLR’s record-breaking title reign? 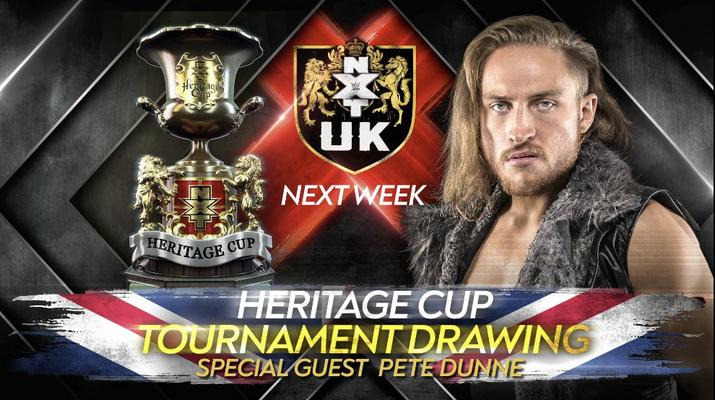 Before the NXT UK Heritage Cup Tournament officially kicks off, the drawing of the tournament brackets will be drawn this week, with former NXT UK Champion, ‘The Bruiserweight’ Pete Dunne making a return to the brand he helped build to assist with the drawing. At the time of writing, Flash Morgan Webster, Noam Dar, Alexander Wolfe, A-Kid, Dave Mastiff, Joseph Conners, and Trent Seven have all been announced for the tournament, with the eighth and final entrant being a wildcard entrant. Dunne’s last official appearance in an NXT UK ring came in June 2019, as ‘The Bruiserweight’ teamed with his British Strong Style partners in a losing effort to Imperium. Of course, Dunne has reached massive success since then, capturing the NXT Tag Team Championships this past February. Who knows, maybe he’ll be the wildcard final entrant.

Following their victory over Kenny Williams and Amir Jordan in last week’s opening match, the reigning NXT UK Tag Team Champions, Gallus (Mark Coffey and Wolfgang) were confronted by a slew of other pairings from NXT UK‘s doubles division. Ashton Smith and Oliver Carter, South Wales Subculture (Mark Andrews and Flash Morgan Webster), The Hunt (Wild Boar and The Primate), and Pretty Deadly (Lewis Howley and Sam Stoker) all surrounded the ringside area, while Imperium (Fabian Aichner and Marcel Barthel) looked on via the video screens. NXT UK‘s tag team division has never exactly been short of talent, and this segment proved it, however, which of these teams has what it takes to be next in line at challenging ‘The Power Forward’ and ‘The Regulator’?