We are on the road to Bound For Glory with an excellent card on show from IMPACT with four matches announced so far and a fifth yet to be determined as we see the X Division title up for grabs.  Let’s dive into the action from IMPACT! On AXS TV.

IMPACT is TOMORROW at 8/7c on @AXSTV! #IMPACTonAXSTV pic.twitter.com/ALMZycYnsi 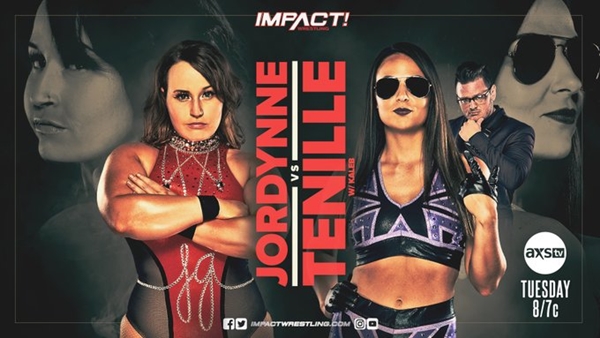 Dashwood returns to the ring for the first time since March as she takes on former tag team partner Jordynne Grace.  Meanwhile, this will be the first return to the ring for Grace in IMPACT since her failed attempt to capture the Knockouts Championship from Deonna Purrazzo in a 30 minute Iron Man match a month ago.  The two last met on IMPACT in November 2019 with Grace coming out the winner.  Can former Knockouts Champion Grace bounce back from her last loss? Will Dashwood suffer from any ring rust as she attempts to assert herself in the Knockouts division?

The #Virtuosa 👁 & The Curator pic.twitter.com/yf85K6e3lv

A follow up from last weeks tag team contest, Susie attempted to befriend Lee during their match with Lee rejecting her advances.  During an intense encounter, we nearly witnessed the return of Susies previous demonic incarnation Su Yung until Kylie Rae was able to calm her down.  Susie was able to get the pin on Lee to claim the win but IMPACTs newest knockout will be seeking retribution this week.  Can Susie make it two wins on the bounce and suppress Su Yung?  Or will Kimber Lee show why IMPACT was so desperate to acquire her services?

The seemingly never-ending rivalry between Sami and RVD rages on, despite Callihan picking up the win over RVD a few weeks ago he suffered a post-match beatdown from Van Dam and his wife Katie Forbes ensuring the rivalry was kept going.  While there has been plenty of back and forth between the duo with Sami ruining Forbes photoshoot reveal and RVD attacking Callihan on a number of occasions, most notably prior to his IMPACT title shot against Eddie Edwards, both sides want the last laugh.  Can Callihan overcome RVD again and put the rivalry to bed?  Or will RVD win out and continue to torture Callihan?

Trey was chasing a title shot on last weeks show with Raju advising him his hands were tied as both TJP and Chris Bey were ahead of him in the pecking order.  Trey then disposed of TJP in a tremendous back and forth matchup putting himself firmly in contention for a title shot.  Raju was then cornered by all three contenders backstage where he offered up a triple threat with the winner getting a shot at the champion.  While it seems to have been worded carefully to hint that it might be a non-title match, IMPACT social media firmly states that it will be for the X Division Championship.  This could be yet another X Division classic to add to the IMPACT library with Bey looking to prove his brief stint as champion wasn’t just a fluke.  Will Raju have a trick up his sleeve as many believe? Can Trey finally get his hands on some gold in IMPACT? Will the experience of TJP come out on top?

What else will we see?

Will more matches for Bound for Glory be made?

Is Moose any closer to EC3?

Can Heath get back on IMPACT again?

Tune in tonight to find out.