While FTR (Dax Harwood and Cash Wheeler) made their AEW debut a few months ago, it wasn’t until last week, under the watchful eye of Arn Anderson, that the duo put pen to paper, officially signing their contracts as All Elite. FTR didn’t seem to ask for much in the way of special provisions, save for one request: tag team appreciation night, set to be held this week on AEW Dynamite.

Considered one of the best tag teams in the world for some time now, it only makes sense that FTR would want tag team wrestling to get a full special on TV and for AEW to have a chance to show why they have the best tag teams in all of wrestling. Set to feature special appearances from legendary tag teams, the Rock N Roll Express and half of the Four Horsemen (Tully Blanchard and Arn Anderson) AKA the Brain Busters, as well as a tag team title match between Hangman Page and Kenny Omega against Jurassic Express, and more, Tag Team Appreciation Night looks to be a fun showcase of some of the best AEW has to offer. 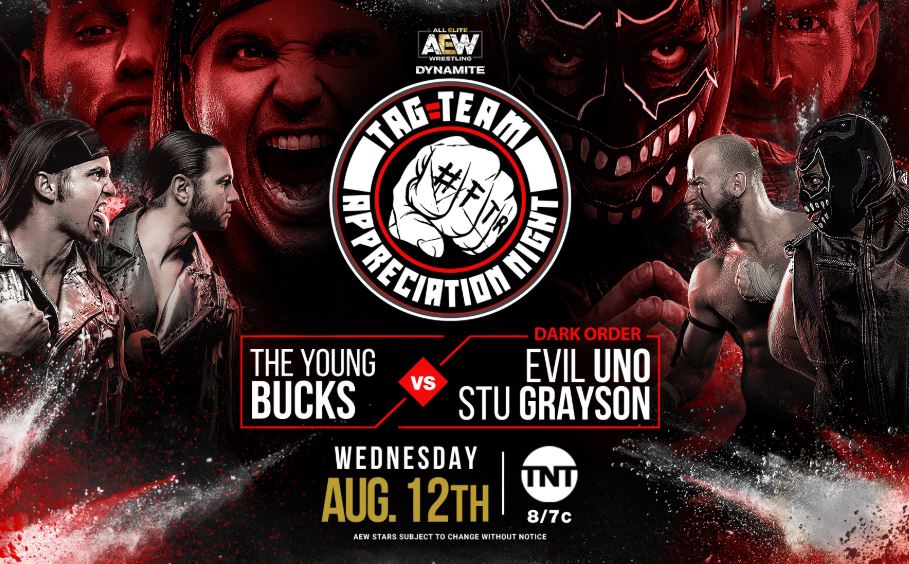 It’s Wednesday, and you know what that means…For a while now, the Dark Order has been a thorn in the Elite’s side, with Cody, Kenny Omega, Hangman Page, and the Young Bucks, all having recent run-ins with Mr. Brodie Lee and his gang of misfits. Last week on AEW Dynamite, the two factions engaged in a huge and chaotic 12-man tag that had all kinds of great storytelling and action that one would have expected in a brawl between these two sides. On the side of the Elite, were FTR, who seemed an unlikely ally and it showed in the match. Plus, there was more in the way of the growing tension between Page and Omega, as the teases of Omega’s turn continued.

The Bucks tried to get everyone together, but in the end, Dark Order got their biggest win yet, by defeating the Elite and FTR. This week, the Bucks will get a chance to get their win back but it won’t be easy as Evil Uno and Stu Grayson as Lee’s top team right now, sitting at 8-1 and right above the Bucks in the tag team rankings. This is a big match for both teams as they’ll look to stay in the title picture.

Hangman Page and Kenny Omega vs Luchasaurus and Jungle Boy 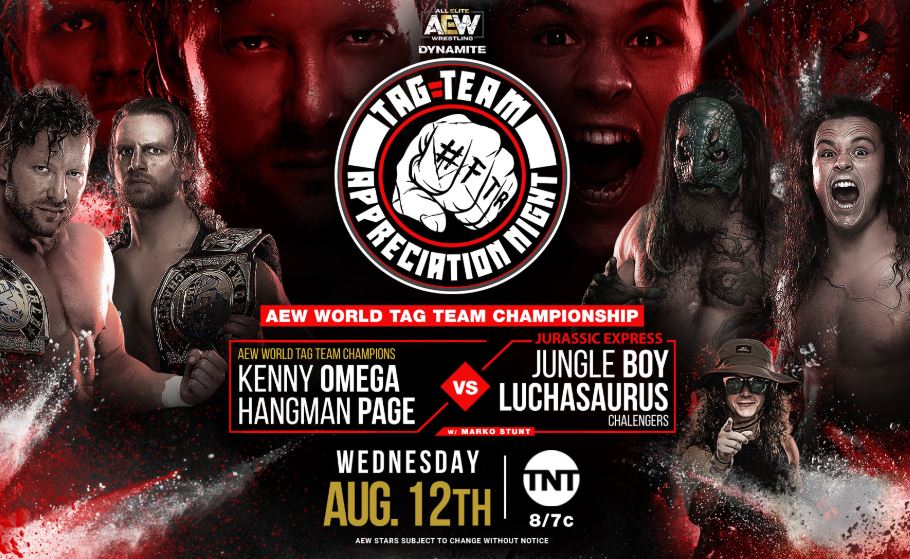 Speaking of those tag team champions, Hangman Page and Kenny Omega will once again be in a championship match, marking the fifth time in their last seven matches that the two will have to defend their titles. In fact, it’s the fifth time in their last five two-on-two tag team matches that the championships will be on the line. That’s a lot of pressure no doubt, and it seems that it’s getting to the team. Well, at least, one of its members. Omega hasn’t quite been right for some time now. Or depending how you look at it, he’s only starting to get back to being right now. Perhaps this is the week where it all comes crumbling down.

Jurassic Express is a bit of an unlikely opponent given their placement on the tag team rankings. Above them are the Bucks, Uno/Grayson, Best Friends, and the undefeated FTR. But from a storytelling standpoint, these other teams are all pretty much engaged elsewhere right now and FTR is likely going to get their shot at September’s All Out. So it makes sense that the surging Jurassic Express would have their opportunity. The story here though is really about what Page and Omega do and how the tensions in the team continue to manifest. Unlikely allies from the start, it’s only a matter of time until AEW’S longest-reigning tag champs see an end to their reign and an end to their partnership. 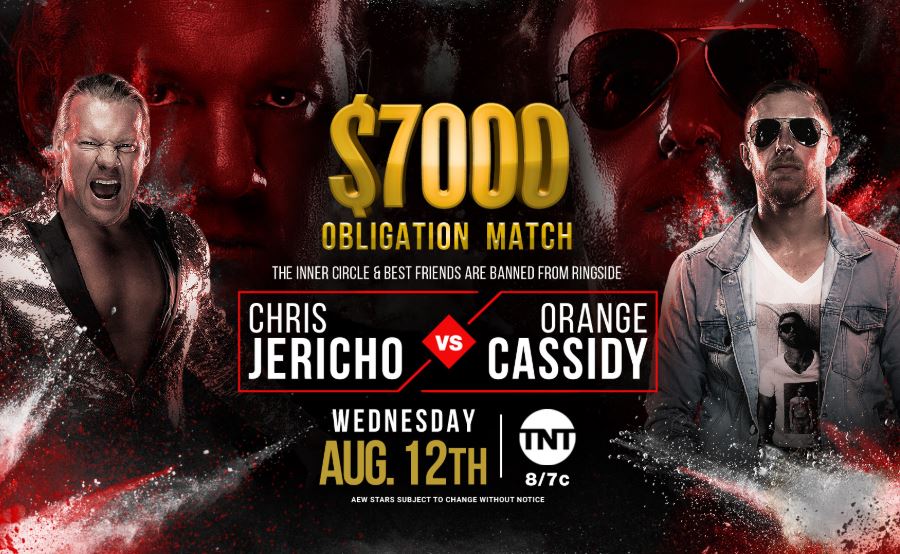 The ultimate grudge match is set for AEW Dynamite as Orange Cassidy and Chris Jericho will continue their exciting rivalry in another singles match, but this time with big implications. See, Cassidy ruined a very expensive jacket of Jericho’s (sound familiar?) by pouring gallons of orange juice on it. According to Jericho, the value of the jacket was $7,000 and now, he’s ready to make Cassidy pay for his act of vandalism much as he tried to do the last time someone ruined one of his custom and costly pieces of clothing.

Not one to take the disrespect lying down, Jericho sought to embarrass Cassidy last week with a debate, a fitting challenge from a man who is a mic god against one who barely talks. But Cassidy knew Jericho’s motives and surprised the Demo God, when he wowed guest moderator, Eric Bischoff with his educated and insightful stance on the impacts of global warming. Bischoff gave Cassidy the win, infuriating Jericho who, with the help of Jake Hager, attacked his opponent following the debate. That leads to this week, where Best Friends and the Inner Circle are banned from ringside. Cassidy will have his chance, one-to-one, to get the biggest win of his career. 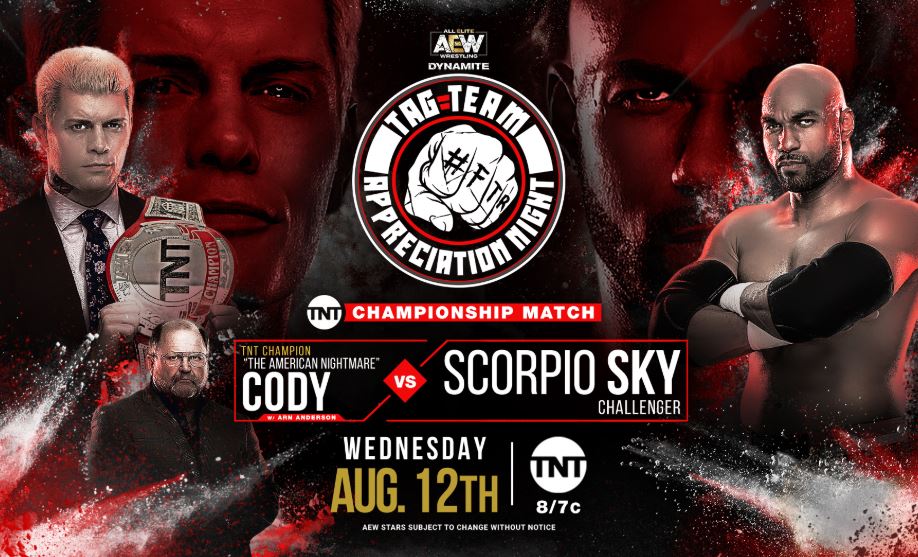 “Are you paying attention?” That’s what Scorpio Sky asked to no one in particular last week, following yet another statement win on AEW DARK. But while no one was named, the next night on AEW Dynamite, it was clear whose attention Sky was trying to obtain. After Cody and Matt Cardona successfully defeated the Dark Order’s Alex Reynolds and John Silver last week, Cody made his way to the back, TNT Championship slung over his shoulder. He was met in the tunnel by Sky who didn’t have to say a word.

With a tap of the title, Sky made his intentions very clear. Not one to back down from any challenge thus far, Cody accepted, and this week, Sky will finally have his chance to bring his AEW DARK winning streak to Dynamite, and possibly win his first singles title with the company in the process. 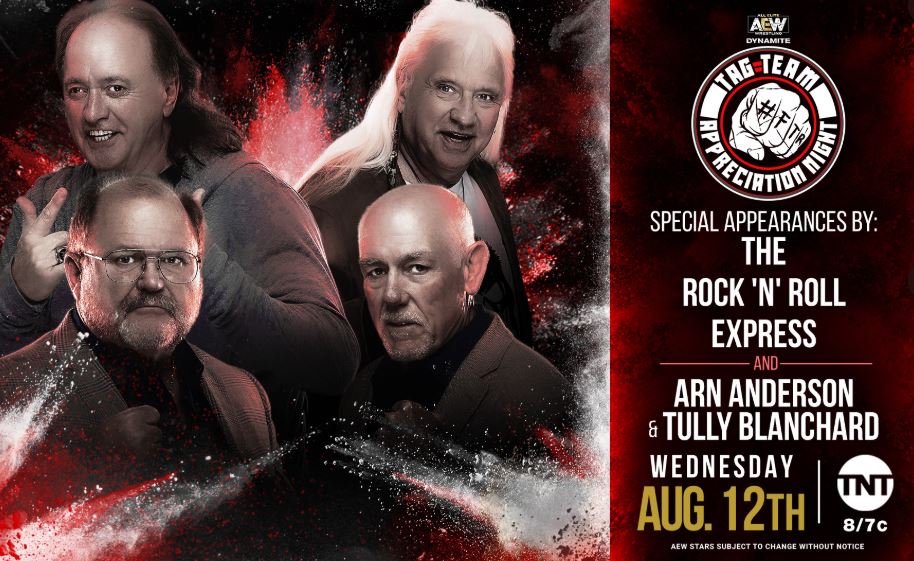 It wouldn’t be Tag Team Appreciation Night without some special appearances by some legendary tag teams. So in order to help celebrate the night, FTR has invited Rock ‘N’ Roll Express and the Brain Busters to be part of the special occasion. Still wrestling, RNR Express has been on AEW before, as they were there to present the tag team championships only to be attacked in the process by Inner Circle’s Santana and Ortiz. Perhaps the two will be looking for a measure of revenge this week.

The Brain Busters on the other hand, are both regulars with AEW already, as Arn Anderson is part of the Nightmare Family an Tully Blanchard is the advisor for Shawn Spears. Anderson and Blanchard, are also of course, one-half of the Four Horsemen, a faction that AEW has teased creating a new era version. Those teases continued last week when Blanchard was seen giving advice to FTR prior to their match and Anderson was present for their contract signing. Most believe that a new 4HM would naturally feature FTR as the showcase tag team. So, it would only make sense that on a night dedicated to celebrating tag teams and one that is hosted by FTR, could perhaps lead to the unveiling of a brand new group, under the watchful eye of two men who were once part of the original.

Programming note: Starting with the August 19th episode of AEW Dynamite, which will air on August 22nd instead due to TNT airing the NBA playoffs, there will be three episodes of Dynamite in August/September that will air on different dates/time slots. Make sure to set your DVR in order not to miss any of the action!

Stay tuned to Last Word On Pro Wrestling for more on this and other stories from around the world of wrestling, as they develop. You can always count on LWOPW to be on top of the major news in the wrestling world, as well as to provide you with analysis, previews, videos, interviews, and editorials on the wrestling world. You can catch AEW Dynamite Wednesday nights at 8 PM ET on TNT and AEW DARK Tuesday nights at 7 PM ET on YouTube.