Looking to continue winning that all important 18-49 Nielsen demo, AEW Dynamite returns this week with a card full of exciting match-ups and no shortage of what the television biz would call, “fan service.” Top names will be in action, two sets of titles will be on the line, and perhaps best of all, MJF will get a live mic to deliver what he’s calling “the state of the industry” address. Make sure to tune into AEW Dynamite on TNT this Wednesday for all this and more!

Ask and ye shall receive. Since winning the TNT Championship on May 23rd at Double or Nothing, Cody has done everything he said he would with the title. Already defending the championship six times in just 66 days, Cody has been the premier fighting champion for more reasons than one. Because not only has he defended the title week in and week out, but he’s done so against anyone who’s thrown their name in the hat essentially, which is something he said he would. Eddie Kingston, Ricky Starks, Sonny Kiss, Jungle Boy, Marq Quen, and Jake Hager have all stepped up to the plate and each one has fallen to the American Nightmare.

But this week, Cody will face a big test as he takes on the fans’ (and Arn Anderson‘s) choice title contender, WARHORSE. A month or so ago, the hashtag #CodyFearsWarhorse began trending on Twitter and clearly, AEW brass took notice. Following another special title match against Kingston, who had called Cody out himself, AEW announced that Cody did not in fact fear Warhorse and he was ready to prove it by giving him a shot at the title this week. The Twitter campaign had worked and on Wednesday, the 27-year-old veteran of seven years, WARHORSE, will get the biggest opportunity of his career. And he will no doubt look to “rule ass” in the process. 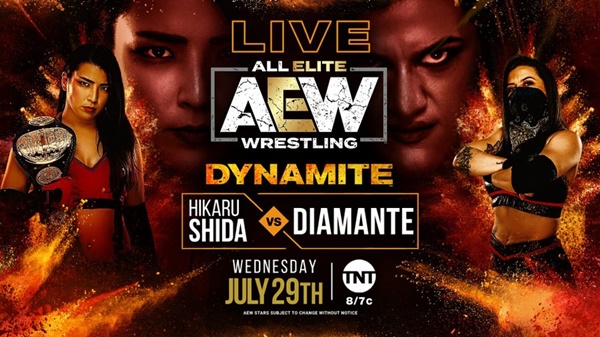 Ask AEW fans who they want to see in the women’s division and without fail, one of the top names mentioned is the 29-year-old Diamante, who has made several appearances with the company this past year. Known for her time in Queens of Combat, Women of Wrestling, and most notably, IMPACT Wrestling, where she was a member of the largely popular LAX, Diamante made her AEW debut on AEW DARK in January 2020. She made her Dynamite debut last week taking on Ivelisse in a match that certainly showed why she is someone AEW would love to add to their women’s division, especially now following the announcement of the upcoming women’s tag team tournament.

And while this is a non-title match, it is still a huge opportunity nonetheless for Diamante. Hikaru Shida is the ace of the women’s division. Having won the title at Double or Nothing, the 32-year-old joshi star, known for her time in Ice Ribbon, Pro Wrestling WAVE, and Oz Academy, has only had one defense thus far as she only recently returned to AEW following time away due to the travel implications of COVID-19. Back now, Shida will look to add to her all-time leading record among the women’s division, where she is 19-7. On the year, Shida is 14-1, a record that is second only to Jon Moxley (14-0) and Cody (15-1).

MJF State Of The Industry Address 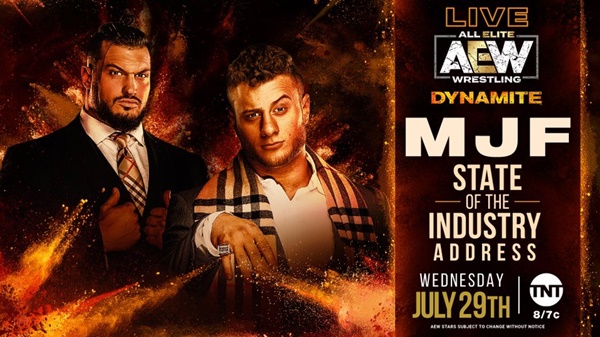 When MJF first began to break onto the wrestling scene five years ago, the now 24-year-old was quick to announce his presence by declaring himself the future of the industry. A solid all-around wrestler, MJF has always been known for his charisma and his ability to work a crowd through absolutely scathing promos. One of his best came years ago in MLW when he won the MLW Middleweight Championship and uttered his “talent over tenure” promo that really got the world talking. His entire career, all MJF has done is deliver excellent work every time he has a mic in hand and this week will be no different.

MJF has been using Twitter as his platform of late, to lament his lack of representation on AEW TV. Using the hashtags #NotMyChampion and #MJF2020, MJF has been selling the story that the fans deserve better than what they currently have. While he could be talking about either Cody or Moxley as the champion in question, we should find out more Wednesday night as the state of the industry address will put MJF back in the spotlight and give fans an idea as to what is next for the young star. Make no mistake, you won’t want to miss what MJF has to say. 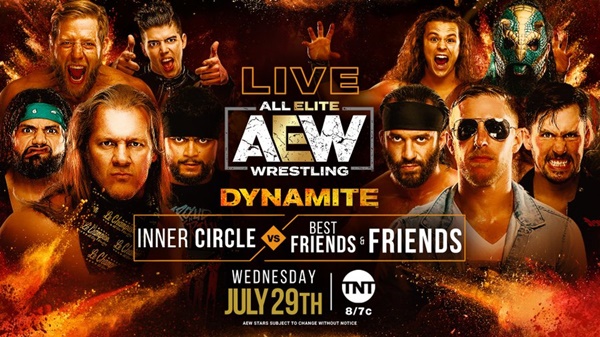 In 1967, the Beatles released the top hit “With a Little Help from My Friends” and on Wednesday night Dynamite, that theme is exactly what Best Friends and Orange Cassidy will be hoping to accomplish as they team with Jurassic Express to take on the full strength Inner Circle, continuing the animosity among these 10 men. Tensions between the Inner Circle and Best Friends have been going on for over a month as the two teams first met in June when Chuck Taylor, Trent, and Cassidy defeated Jake Hager, Santana, and Ortiz on Dynamite. The following week, Best Friends defeated the rest of the Inner Circle when they beat Chris Jericho and Sammy Guevara in a #1 contendership match for the tag team titles. Meanwhile, Cassidy was feuding with Jericho with things culminating in a match at Fyter Fest that was won by the Demo God.

In the midst of the in-ring fighting, there has been no shortage of extra curricular activities outside of the ring as well as Best Friends and Cassidy continue to find themselves in the cross-hairs of the Inner Circle. Now, Jurassic Express are in those cross-hairs as well. Last week, Jericho and Hager teamed up to defeat Jungle Boy and Luchasaurus and proceeded to beat down the duo afterwards, thanks to assistance from the returning Guevara. It’s a huge 10-man brawl set to take place this week and no doubt both groups of guys will look for a win, will look to get by with the help of their friends. 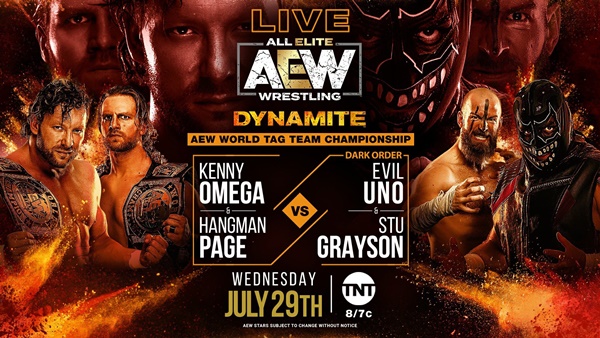 Almost as soon as Kenny Omega and Hangman Page won the tag team championships on the Jericho Cruise back in January, people have been wondering when the unlikely duo would break up. For a while, it seemed like the erratic Page would be the one to turn on his partner, but over the past few weeks, the opposite has been teased as the frustrated Omega has started to show his old killer side that has long been missing. In fact, the return of Omega back to one of the best in the world is a prospect that has mouths watering and has been one of the best stories to follow on AEW over the last few weeks. Might we get even closer to Omega’s eventual implosion this Wednesday on AEW Dynamite?

It’s almost certain, especially with the Dark Order across the ring as antagonists. And Evil Uno and Stu Grayson may actually make the most sense right now to dethrone the reigning tag champs and take advantage of a miscue or total turn from Omega. With just one loss to their names this season, Uno and Grayson have been Dark Order’s shining unit. The duo have yet to lose a standard two-on-two tag team match, their record of which has helped earn them this title opportunity. It may well be time to restart the Dark Order as well as the growing faction hasn’t quite had the impact it was initially thought they would. The group’s first titles however, would go a long way to them re-establishing some sense of dominance among the roster. 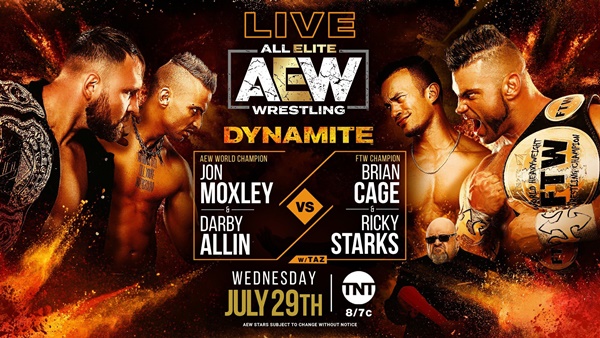 When Ricky Starks shocked the world by joining Taz and Brian Cage following last week’s AEW DARK, he became just the latest wrestler to buddy up on the roster. In fact, as it looks, Jon Moxley and Darby Allin may just be the only two members of the roster left to be lone soldiers. Fittingly, they’ll team up on Wednesday as the Cage/Allin/Moxley title picture gets its latest chapter.

It didn’t take long for Cage to make his impact known on the roster. Winning the #1 contendership for Moxley’s title in his first match on the roster at Double or Nothing, Cage ran through all of his opponents in the run-up to his title match, with no match lasting more than two-and-a-half minutes. Facing Moxley at Fight for the Fallen, Cage lost his first match on the roster in somewhat controversial fashion as Taz threw in the towel. But that wasn’t all. In the midst of the match, Allin made his return for the first time since Double or Nothing, where he was put on the shelf by Cage. Allin attacked Cage in his return, insinuating himself in the title picture as a result. Clearly, Taz and Cage didn’t take kindly to that, attacking Allin, with Starks’ help, last week on DARK.

With Cage gunning for a rematch for the world title and Allin still seeking out revenge and perhaps a world title match himself, these stories will all collide on Wednesday. Seeing Moxley in a tag team match these days is quite rare. In fact, this week marks the first time since October 2019 and AEW Dynamite episode three, that Moxley will be in such a match in his AEW career. But if ever there were a compatible partner, it would be Allin. While it’s unlikely these two start teaming up on a regular basis as this match is more to push the narrative of Cage/Allin/Moxley along than it is for anything else, the one-off this week will be more than worth the watch. As has shown, Moxley is a huge draw for AEW and alongside fan-favorite Allin, a guy with a similar wrestling style and penchant for crazy stunts, this main event should help AEW Dynamite win the hour, and the demo, once again.

Stay tuned to Last Word on Pro Wrestling for more on this and other stories from around the world of wrestling, as they develop. You can always count on LWOPW to be on top of the major news in the wrestling world, as well as to provide you with analysis, previews, videos, interviews, and editorials on the wrestling world. You can catch AEW Dynamite Wednesday nights at 8 PM ET on TNT and weekly on YouTube.