To paraphrase the tweets of Evil Uno, “It’s Tuesday, Mr. Brodie Lee. You know what that means.” It’s time for another edition of AEW DARK. This week’s card is loaded with eight matches, featuring top AEW talent, many of whom haven’t been seen on DARK in a long time such as Best Friends and women’s champion, Hikaru Shida. As always, indie wrestlers pepper the card including two big names, Sabby, formerly WWE‘s Tino Sabbatelli, and Aaron Solow, winner of the Dojo Pro tournament. Other familiar names like Will Hobbs, Brady Pierce, Diamante, and Corey Hollis will also be in action.

It’s looking to be another great night of action for AEW’s second show. Let’s take a look at the card and what to expect from this week’s episode of DARK.

We have EIGHT Dark matches ready for tomorrow night!
Watch #AEWDark every Tuesday at 7e/6c via our YouTube channel at https://t.co/oZiB2U1XM8. pic.twitter.com/ZiTDXCqv3F 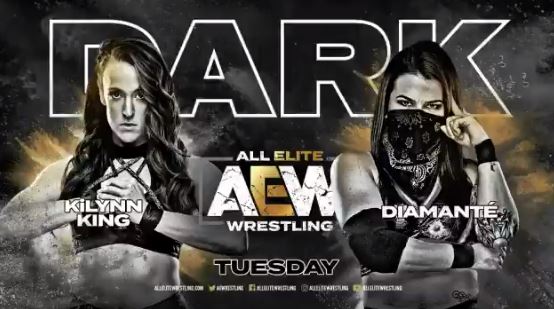 AEW DARK has provided an opportunity for dozens of indie wrestlers to get matches in the big spotlight against top-level competitors. This week, there will be a rare DARK match in which both competitors are indie wrestlers as KiLynn King returns to DARK for the fifth time to face off against Diamante, who is making her fourth appearance overall.

Both women are certainly exciting names within the AEW universe and have found themselves receiving some pretty big opportunities. King, who trained at the 3D Academy and who is in just her third year as a pro, made her Dynamite debut during Fyter Fest a few weeks ago. Diamante meanwhile, who is linked to AEW’s Proud N Powerful due to their allegiance as members of LAX while in IMPACT Wrestling, is a top indie name that any women’s division would be lucky to have. She’ll be making her Dynamite debut on Wednesday, so a win on Tuesday would go a long way toward helping her build to that big moment. Both King and Diamante are talented but as the veteran, look for Diamante to pick up the victory and get one step closer to perhaps becoming All Elite in the process. 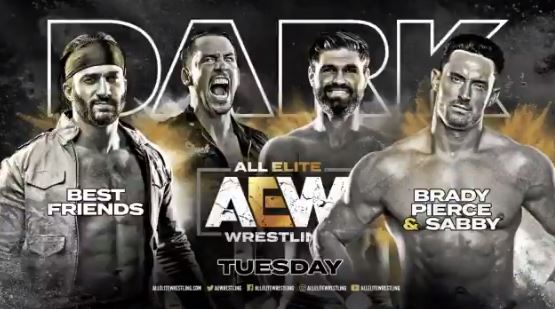 Best Friends (Trent and Chuck Taylor) have been on a roll this year and they’ll look to continue their run of success as they make their DARK return for the first time since May to take on the team of the returning Brady Pierce and debuting Sabby.

While Trent and Taylor weren’t successful in dethroning Hangman Page and Kenny Omega for the AEW tag team titles, the duo has been enjoying a great 2020. Alongside fellow Best Friend, Orange Cassidy, Trent and Taylor have been one of the most exciting tag teams to watch in a division that is stacked with top talent. The duo has beaten the likes of the Inner Circle, Jurassic Express, Private Party, Butcher and the Blade and more. This will be their first action since Fyter Fest but it’s clear Best Friends will be looking to keep the wins coming as they work their way back to another title shot.

Brady Pierce is a DARK staple as the 29-year-old Southern indie star now returns for the seventh time after making his debut appearance back in May. Pierce has wrestled mostly in tag team action and will be pairing with his fourth different partner this week as he’ll team with the wrestler formerly known as Tino Sabbatelli. Now going by Sabby, this will be Sabbatelli’s first match since March as shortly after, he was one of the WWE/NXT releases. The 36-year-old made his wrestling debut with NXT in 2015 after ending a six-year NFL career. Sabbatelli has only wrestled under the WWE banner, so not only will this be his DARK debut, but it will be his non-WWE debut as well. 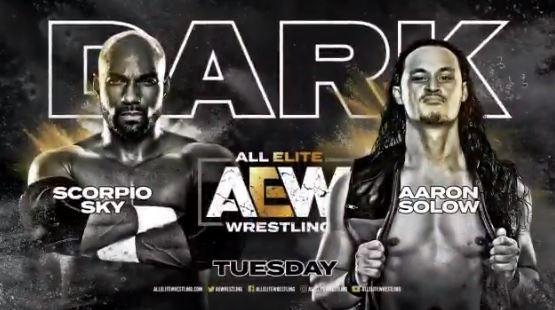 Another Scorpio Sky singles match and another possible match of the night in the making as Sky’s singles journey will see him take on the debuting Aaron Solow.

With Frankie Kazarian and Christopher Daniels returning to their tag team ways, a union that has brought them numerous career successes, that has opened the door for Scorpio Sky to have a much anticipated singles run. The longtime career veteran has always been undervalued but lately he’s had the chance to shine, taking down DARK opponent after DARK opponent. The 37-year-old Sky, who is a veteran of 18+ years, has won his last four singles matches. A champion nationwide, Sky’s moment is on the horizon but he’ll have another real challenge as he takes on Solow.

Trained by the Storm Wrestling Academy, many knew Solow best as being “Mr. Bayley” as he is the fiance of WWE’s Bayley. While her fame still exceeds his, Solow, who began wrestling 10 years ago, started to get his own recognition when he took part in and won the Dojo Pro tournament. With the win came a television title match in Ring of Honor, an opportunity that helped Solow continue to build his brand on a larger stage. Now, the former Big Time Wrestling and Full Impact Pro star, has wrestled for WWE, including taking part in the Cruiserweight Classic, ROH, New Japan Pro Wrestling and more. For those who didn’t know Solow as “Mr. Bayley,” it was likely because they knew him for his super popular indie tag team, Extra Talented, where his partner was current AEW star, Ricky Starks. While Starks is wrestling singles for now, it wouldn’t be surprising to see him reunite with Solow in the perhaps not too distant future. 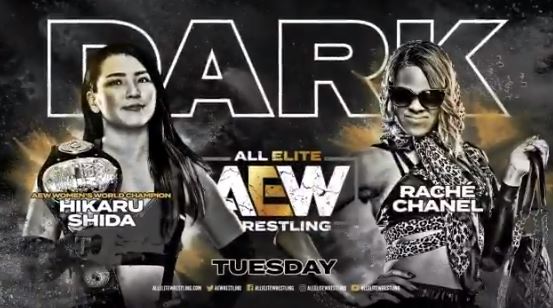 Hikaru Shida is returning to AEW DARK this week for the first time since May and first time since she won the women’s championship at Double or Nothing. She’ll take on Rache Chanel, who will be making her third DARK appearance in a row.

Approaching two full months as AEW Women’s Champion, Hikaru Shida will be in action for the first time since Fyter Fest where she successfully defended her title against Penelope Ford. The 11-year pro and veteran of companies such as Ice Ribbon, Pro Wrestling WAVE, and OZ Academy, 32-year-old Shida has had a great year in AEW and will look to continue that this week against Rache Chanel, who has only wrestled a handful of matches so far in her young career. Chanel has looked good in limited action the past two weeks and will have another opportunity to get experience against the champ on Tuesday.

Brandon Cutler and Peter Avalon vs Butcher and the Blade 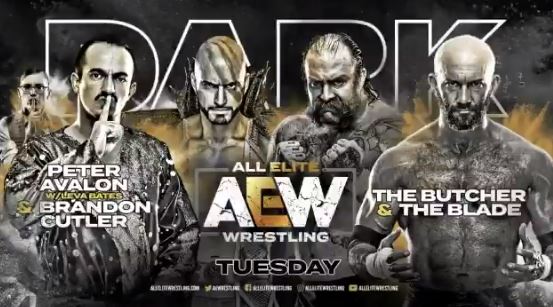 We’re gonna make this one short and sweet because there are some things in life that are guaranteed. Death, taxes, and of course, Peter Avalon and Brandon Cutler losing in some way, shape or form. The duo is 0 and forever as their losing streak has been a recurring story on Being the Elite and AEW DARK. They’ve pretty much lost to just about every team so far including Jurassic Express, Dark Order, the Young Bucks, SCU, and the Natural Nightmares. On Tuesday, they’ll be adding Butcher and Blade to that list as the duo will look for a tune-up before they take on the Young Bucks on Wednesday in a street fight on Dynamite. 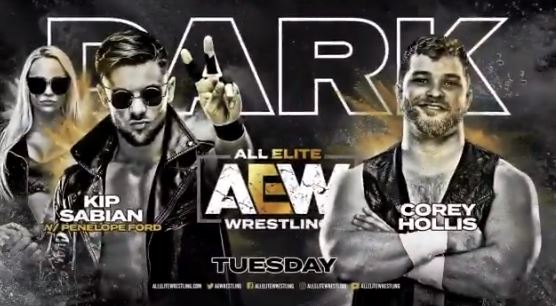 Returning to DARK for the first time since May, Kip Sabian is back in singles action to take on Corey Hollis, who is returning for just his second DARK match, first of which is coming in singles competition.

Since April, much of Sabian’s time was focused on his budding tag team, SuperBad DeathSquad. However, with Sabian’s partner absent for the foreseeable future, the 28-year-old UK star is returning to singles competition, where he has found a decent level of success this year, picking up seven victories. Alongside Ford, Sabian has shown his cocky heel side to perfection and now that his focus is back on singles competition, there is no denying he’ll turn to tricks and shortcuts to get on top. Sabian seems like a perfect person to answer Cody’s TNT open challenge as he was one of the men who took part in the initial tournament to crown the first title winner.

Sabian’s opponent is the well-known Southern indie star, Corey Hollis. The Alabama native first made his AEW debut in March, following an 11+ year indie career thus far. Hollis is specifically known for his time in the NWA, Anarchy Wrestling, Premiere Wrestling Xperience, ROH, and more. He took part in the Dojo Pro tournament, has wrestled for TNA/IMPACT Wrestling, and even enjoyed a brief stint in NXT in 2016. Hollis is certainly a name to watch for and he’ll have a great chance to put on an impressive performance on Tuesday when he shares the ring with the equally talented Sabian.

Ricky Starks vs Will Hobbs 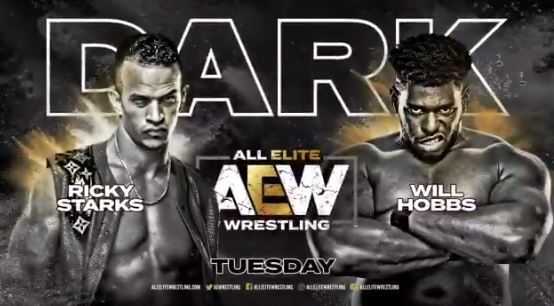 Ricky Starks has yet to lose since officially joining the AEW roster and on Tuesday, he’ll look to keep that streak going as he takes on the California veteran, Will Hobbs, who will be making his third appearance on DARK.

New Orleans’ Ricky Starks will be in action for just the fourth time in AEW and third time on DARK. Having answered Cody Rhodes’ TNT Championship Open Challenge a few weeks ago, Starks is only just beginning to carve out his AEW career. The eight-plus year veteran is most known for his time in NWA, where he is a former television champion, but he has also wrestled in ROH, WWE, Dojo Pro, and throughout the indies. Starks is someone to keep an eye on in AEW and he’ll look to keep his name at the front of mind as he takes on Hobbs.

Known for his time in All Pro Wrestling where he is a former 6x champion, Will Hobbs is returning for his third DARK match after making his debut at the beginning of the month. A long time veteran of the California indie scene, Hobbs has had some recent opportunities on DARK and this Tuesday he’ll have another one against Starks. 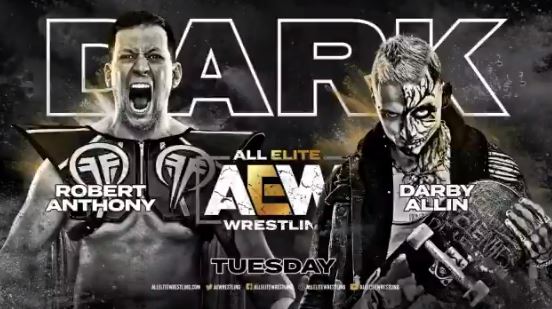 Another match with the potential to be match of the night pits Darby Allin against DARK favorite and longtime indie wrestler, Robert Anthony, who is making his sixth appearance on the program.

Returning to action for the first time since May, the 23-year-old Allin has always been one of AEW’s most exciting and explosive performers. Consistently one to put on a great match, Allin hasn’t wrestled too much this year. Now that he’s back however, business is about to pick up. Allin, who lost to Cody in the semifinals of the TNT title tournament, is another name who could very well pop up to answer an open challenge one of these days. But for now, he’ll just look for a win on DARK against one of the program’s toughest competitors.

An 18+ year veteran of the industry, Anthony’s matches on DARK have been really fun to watch. He’ll be making his sixth such appearance on Tuesday. Recently, Anthony has found name recognition in AEW as he’s called his shot and become someone who has been reliable to put on a solid match every time out. Known for his time in AAW and Combat Zone Wrestling, where he is a former heavyweight champion with both promotions, Anthony has made the most of his DARK opportunities for sure and there is no reason to believe the same won’t be the case this week.