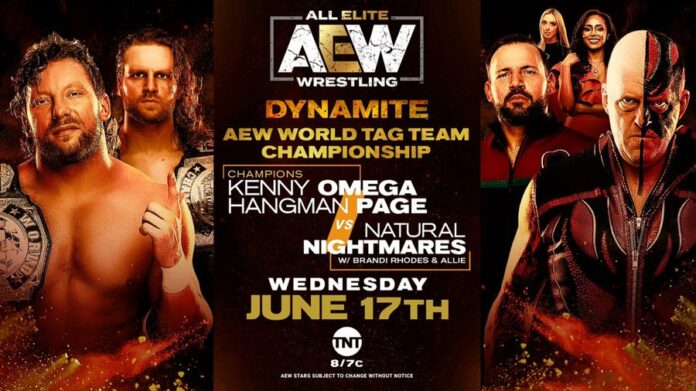 AEW Dynamite is almost here again! Throughout the COVID-19 pandemic of 2020, All Elite Wrestling has consistently put on high-octane, fun shows.  It is almost a certainty that this week will be no different.  A show featuring tag team championship matches, a battle of youth and experience and a high-profile TNT Championship match, we’re looking at another fun show.  Let’s take a look at what’s on offer from this week’s AEW Dynamite.

Kicking things off is Maxwell Jacob Friedman (with Wardlow) versus Billy.  Billy recently confirmed that he is no longer Billy Gunn, after losing the rights to the name to the WWE.  To make things worse, MJF has three names – the greed! This will likely be a solid match, pitting youth against experience.  MJF has quickly established himself as one of the hottest young talents in pro-wrestling over the past few years.  Billy, ever the underrated workhorse, has proven himself capable of still being able to hang with the boys.  Will he be able to this time? Tune in to find out.

Love them or hate them, The Young Bucks (Matt and Nick Jackson) always put on fun matches.  Many still refer to them as “spot monkeys”, but they are still one of the best tag teams around.  Kip Sabian and Jimmy Havoc have proven themselves capable as an entertaining tag team themselves.  Though not possessing the natural tag team chemistry of the Bucks, they certainly possess enough talent and ability to contest them.  With Penelope Ford in their corner, who knows what might happen.  Could we see some kind of FTR appearance?

With both Kris Statlander and Britt Baker injured for the foreseeable future spots are opening up in the AEW Women’s division.  Anna Jay made an impression in her debut match and was quickly snapped up by AEW.  On this weeks edition of AEW Dynamite, she will be in action looking to get a win to start her rise up the division to earn a shot at Hikaru Shida.

What follows is another tag team match.  It honestly feels like Best Friends (Chuck Taylor and Trent) are in number one contender matches every week.  This week they face Le Sex Gods – young star, Sammy Guevara and wrestling legend/part-time commentary genius, Chris Jericho.  These four are incapable of having a drab match with each other.  Honestly, this could be the best thing on the card.  Can Best Friends overcome Le Sex Gods? Friendship can overcome anything – “there is nothing I would not do for those who are really my friends” – Jane Austen (no relation to Stone Cold).  Hopefully it does here.

Do you like tag team matches? Would you like another tag team match? Have another tag team match! Kenny Omega and Hangman Page unite once more to defend their AEW World Tag Team Championships against the undefeated Natural Nightmares (Dustin Rhodes and QT Marshall).  Whether or not they will be undefeated once more remains to be seen.  Honestly, with how crowded the tag team division is right now, does it make sense for the Natural Nightmares to be tag team champions over FTR, Best Friends, the Young Bucks, Sabian and Havoc etc? This will likely be a successful defense for Omega and Page.  However, AEW does like to surprise every once in a while.  Expect another solid bout of tag team wrestling.

Of course, there is the billed segment of Cody once more defending the TNT Championship in an Open Challenge.  Who will challenge the AEW exec? Tune into AEW Dynamite on TNT this Wednesday at 8PM EST to find out!