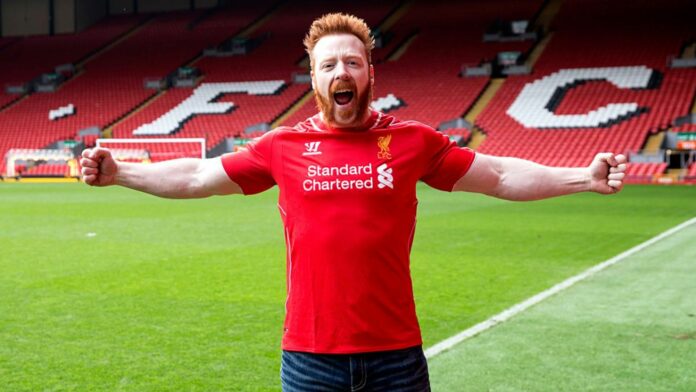 With more and more pro wrestlers coming from as far afield as Europe and Africa these days, it was always inevitable that they would bring their own brand of sporting culture with them, and for many of their kind a football will always be spherical and never egg shaped. That’s right, despite being high flying pain merchants in the ring, many foreign wrestlers love nothing more than stripping from their spandex after a big show, taking a cold shower, and then sitting down to watch their favorite soccer team perform from across the pond. So, who supports who and what binds these musclebound behemoths to what’s known by soccer aficionados as “the beautiful game”?

Although this red headed superstar is a bigger fan of rugby rough and tumble than soccer, he has a definite soft spot for Liverpool and he’ll be a happy bunny this season, with the Reds riding high in the Premier League and being odds on to lift the title. With the team being ideally positioned on England’s west coast, the WWE athlete can easily pay Anfield stadium a visit any time he likes, with a quick flight or boat ride across the Irish Sea.

If you ever wonder why a future match-up between Fandango and Sheamus gets totally out of hand, it may have something to do with the fact that they support rival soccer factions from the same city, with Fandango loyal to the blue half of Liverpool and Sheamus dedicated to the red. Fandango’s affinity to the team affectionately known as The Toffees stems from his theme song being played over the stadium’s loudspeaker system before a big game that took place post-WrestleMania 29. Fandango heard about Everton fans going potty for his song and paid the club a visit when the WWE made a European tour. After meeting then-manager David Moyes, as well as some of the squad, Fandango was hooked and has pledged allegiance to the Premier League club ever since.

Kingston is famous for being the first African-born world champion in WWE history and is a hero in his native Ghana. However, his fame at home pales in comparison to the fever that erupts whenever one of the Ghana national soccer team is in town. Kingston is not immune to the furore that ensues when the Black Stars are playing. This also goes for Chelsea, where his compatriot Michael Essien once plied his trade, and may be the reason for Kingston making Stamford Bridge his club soccer spiritual home.

You would think there’d be more chance of winning free spins online – or flying to the moon – than the Rattlesnake, Stone Cold Steve Austin, becoming a die hard fan of Bolton Wanderers, but that’s what happened in 2009 when Stone Cold visited the UK to promote a movie he was starring in. During the trip he dropped in on the famous Soccer AM television show and, having picked their name out of a lucky dip bucket provided by one of the show’s presenters, declared himself a budding Wanderers fan. Miracles do happen!

Ray Mysterio is fast becoming the standout star of WWE Raw, his unique masked look and aerial manoeuvres winning the hearts and minds of wrestling fans. Coming from Mexico, soccer runs in Mysterio’s veins. Many of South and Central America’s top soccer talent is, of course, mopped up by Europe’s major soccer clubs. With Mexico being no exception, Mysterio’s favorite team are Real Madrid. The Spanish giants even had the diminutive grappler over for a visit, showing him round their Bernabeu stadium and introducing him to star players to boot.

Caption: Mysterio is a passionate follower of the Mexican national team as well as Real Madrid